Ahead of this weekend’s clash against Exeter we caught up with Exeter season ticket holder, Steve Thornely to discuss the match. Here is the result:

THE POSH BLOG: We’ll start with your manager, Paul Tisdale; he is very highly rated by most Exeter City fans. Do you feel that you will be able to keep hold of him in the future or will he move onto bigger things?

STEVE: I think it is inevitable that Tis will move on to bigger things eventually but when I do not know. He has always stated he still has a job to do with us and it’s not finished yet. His loyalty has certainly been tested, for 2 years running he has turned down the chance to work with a significant pay rise and playing budget that makes ours look like pocket money at Swansea City but has each time turned them down for the reason I have stated above. Also Southampton – a club Tis spent several years at as a player and openly admits to having a close affinity with them – tried to lure him to St Mary’s but again he knocked them back. He has been the most successful manager in the history of our club and the way he goes about things makes me proud to support ECFC. He is a very different manager to most; he isn’t animated, he doesn’t shout at players, never moans at the match officials, never gets into confrontations with the opposition bench and also is probably the best dressed and most stylish manager in the Football league! So will he manage at a higher level one day? You bet he will but whether it’s with us remains to be seen.

THE POSH BLOG: You posses a dangerous strike-force. Would you say this is the strongest part of your team?

STEVE: This season our strike force is looking a lot stronger and we possess the type of striker’s that will get you goals. Personally I have always been a fan of Jamie Cureton, I was so pleased when we signed him in the summer and he maybe 35 now and lost a bit of pace but he is still quick, nippy and is deadly in and around the box although I wouldn’t say the strike force is our strongest area on the pitch. One thing Tis has never been able to have is a settled partnership up front. I actually think that central midfield is our strongest area and towards the end of last season it showed, with a great bond forming between central midfielders James Dunne and Liam Sercombe, who is an Exeter boy who has come through our youth ranks and is certainly a bright prospect for the future. 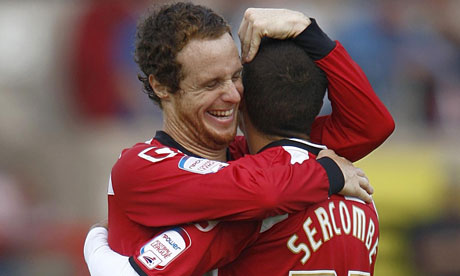 THE POSH BLOG: Other than the two strikers who else would you pick out as your ‘players to watch’ on Saturday?

STEVE: I would usually say our central defender and captain Matt Taylor but he is likely to be out with an ongoing back problem so the one to watch on Saturday is definitely midfielder number 7 Ryan Harley. He has been on fire this season so far and has already bagged 6 goals which is a pretty good return for a midfielder. We plucked him from non-league obscurity at Weston-super-Mare back in our Conference days and Tis has developed him into a quality player. He is 2 footed, very skilful and seems like he can have all the time in the world on the ball. Oh, and he has a wicked shot on him as well. He is constantly linked with a big money move to Championship clubs and I was surprised nobody came in for him back in August but hey I’m not complaining! If he carries on his form, though, like he has started the season then I have no doubt he will go in January

THE POSH BLOG: Obviously the football world was saddened by the news of Adam Stansfield’s death this season. What was it like to be a fan of Exeter City fan at the time?

STEVE: This was a truly sad time for every supporter at Exeter City, we are a club that is run by its supporters so everyone involved with the club is that little bit closer to the players than you would find with most other clubs and I was totally devastated when I heard the news he had died because for me it hit me that little bit more personally. I work with Adam’s Dad so on many occasions he introduced me to Adam and so much so I actually got to know him, his wife Marie and young boys socially and with this became a friend of the Stansfield family. Whenever I saw Stanno he would always stop for a chat; whether it was before a home game or in a pub in Exeter on a Saturday night. What he did for our club will go down in Exeter City folklore, he may not have been the most prolific striker in terms of goals but he certainly chipped in with some very important ones and he certainly made up for the lack of high goalscoring with his effort on the pitch giving no less than 100% every time he stepped out onto the pitch. His boundless energy and running caused opposition’s defence lots of problems. He would chase every ball whether it was a lost cause and running out of play or whether it was to create more space for our players to get forward. It’s an old Football cliché but he REALLY was a central defenders nightmare. He never got sent off in his entire career and only ever picked up 7 yellow cards in his entire pro career with Yeovil, Hereford and us which tells you the type of player he was. He was just a local lad who wanted to do well with his local club so he could look after his young family and fortunately he did that, he said to Tis last year that he didn’t want to play for any other club now as he was back home and wanted to see out his career with us and it was the mark of this man who really did become a fan’s favourite with us all. It’s just so cruel that this horrible illness he had has cut his life short at just 31. To think I was up at Wycombe only on March 20th this year when he made his last appearance for us and 6 months later he is no longer with us, it just isn’t right. One thing you can guarantee though is that Stanno will be in the hearts of Exeter City fans for now and always, and with Yeovil Town and Hereford United fans too as they held him in such high regard when he played for them. Stanno’s eldest son Jay has just started playing for our centre of excellence in the Exeter City under 9’s so I would like to think he will turn out for the first team in about 10 years time.

Adam Stansfield tragically died this year in what was a difficult period for the club.

THE POSH BLOG: You had a very good home record last year and it seems to be continuing into this season as well. What do you think the reason for this is?

STEVE: Teams tend to be a lot tighter at home and we are no different. We have always had a very good home record in the 4 years Tis has been in charge of us and last year it was our home form overall that kept us up. Team’s come to SJP and don’t know what to expect as we get the ball on the deck and play a neat passing game, Tis certainly doesn’t do a direct style of play. He also has a habit of changing the formation and tactics and this can catch teams out too. It’s not an easy ground for away teams to come to. Also its tight little ground we have here with the crowd right on top of the pitch so can perhaps be a little intimidating to some opposition teams although granted we did draw an awful amount of games at home last season.

THE POSH BLOG: What do you believe will be your starting line-up this Saturday?

STEVE: I believe Tis will stick pretty much to what he has had recently with a 3-5-2 formation adopting wing backs with the use of Steve Tully and Scott Golbourne running the channels right and left respectively. Paul Jones will almost certainly start in goal with a 3 man defence in Richard Duffy, Troy Archibald-Henville and Billy Jones. Midfield will see Ryan Harley and Liam Sercombe and one of either David Noble or James Dunne I should think and up front lately Tis has chosen to start with John O’Flynn and Daniel Nardiello but we have a game at Dagenham on Tuesday night it could possibly see a start for Jamie Cureton and Richard Logan – the latter being a player of course you Posh fans are pretty familiar with!

THE POSH BLOG: Finally, a prediction for the result of this weekend’s fixture and where do you think Exeter will finish this season?

STEVE: You are very lucky as I don’t often predict but on this occasion I will. I think it will be a tight game; both teams have scored a lot of goals this season so I think both defences will have to be on top of their games to snuff out the strikers. 1 goal in it I would say and go for a 2-1 for us. I remember us coming up against McLean and Mackail-Smith at Grays and Dagenham respectively in our Conference days so fully aware of how dangerous a strike force they form. As for final league position, I do think we will finish a lot higher than last season now we have what I feel is a stronger team than last season so I will be more than happy with somewhere about the mid table mark like 11th, any higher than that is a bonus.

I’d like to thank Steve for answering these questions. He’s provided some excellent answers and a thorough analysis.