Expected Disappointment from the Proudest Man in England Football

Probable Formation: It could be the usual 4-4-2 Hodgson has preferred as 4 wingers are selected but with Wayne Rooney suspended in the first two games, England could well start with Andy Carroll up front alone with wingers providing crosses as well as cutting in for a shot in a 4-3-3/ 4-5-1 and turn to Defoe the poacher off the bench as opposition defenders start to tire dealing with the Carroll’s physical presence.

Questionable Choices: Well well well, are we back to the 2010 World Cup? Has Hodgson found a plan to make the unsuccessful partnership of Gerrard and Lampard to work? With Parker now finally cementing a place in the national team, why is Gareth Barry still needed, who is not assigned the left midfielder role anymore? Michael Carrick, on the other hand, playing in a similar role as Barry and offering more creativity and longer better passing range, is once again overlooked. Rather than forming a quartet of 30-years old midfield, why not give a younger Englishman a chance of competitive international football, say the impressive Jake Livermore? This will be a central midfield combination lacking speed, energy, fitness and creativity.

Oxlade-Chamberlain has finally made it in the squad after brilliant cameos for Arsenal but Adam Johnson, often coming on as a late substitute but still managed 6 goals and 2 assists in 26 appearances, was left out to make way for the inexplicably dreadful Stewart Downing. Johnson’s unwillingness to commit to defence – the reason why he was frozen out by Roberto Mancini – may not suffice a starting place but the City winger could provide a great impetus when Hodgson needs a spark or two late in the game. The same applies to Aaron Lennon who has constantly been a threat down the flank for Spurs but the lightning-fast winger’s inconsistency have dropped his opportunity.

Possible Aftermath: The selection offers few surprises, not to fans but more importantly to the opponents. The mundane squad has limited flexibility and, especially without key player Wayne Rooney, their tactics and game plan become once again predictable. With Les Bleus looking to harvest from a blossoming young squad, surviving the group stage would already be a big achievement for Hodgson. 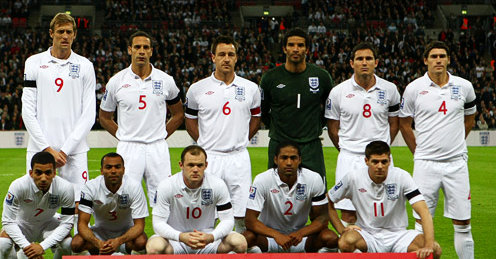 Long Term Development?: When Capello was dismissed, the FA did say whoever the successor is, fans should not expect too much and their target is set in 2014 atBrazil. Yet from what we are seeing, 7 players are over 30 years old – most of them being core players – and 9 more will become 28 or older in 2014. If the FA and Hodgson are determined to bridge the gap between the old and young generation, they should definitely trim the aging portion and let more young lions to blend with the experienced to have a taste of competitive international football. Micah Richards (23), Adam Johnson (24), Jake Livermore (23), Tom Cleverley (22), Aaron Lennon (25) and Daniel Sturridge (22), not to forget the injured Jack Rodwell (21) and Jack Wilshere (20), are all established players for top Premier League clubs and will be close to their peaks in 2014. Unfortunately, they do not have the opportunities to blend as a group this summer. Would one be surprised to see Parker and Barry still retain a place in 2014? I would not.