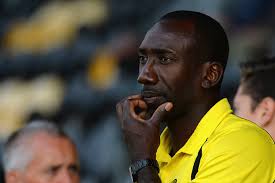 Burton Albion have re-appointed former Chelsea striker Jimmy Floyd Hasselbaink as their new manager, with the League One side sacking Jake Buxton following the team’s 4-3 defeat at the hands of Wigan Athletic.

The Dutch boss first took the important position at the Pirelli Stadium in November 2014 and led his team to the third tier of English football before leaving for QPR a year later.

He guided the Superhoops to a 12-placed finish in the 2015-16 season but a dismal start to the next campaign resulted in his dismissal in November 2016, just 11 months after being in charge.

The 48-year-old’s next managerial stint at Northampton Town also didn’t bring much success and he was relieved of his duties within just over half a year of his appointment.

He has now returned to the Brewers to revive their fortunes as they are currently placed at the bottom of the table, having secured just 13 points from 21 matches.

Following the 1-1 draw at MK Dons, the Staffordshire based side have lost all the subsequent fixtures against Ipswich Town, Doncaster, Lincoln City, and Wigan Athletic.

The former Netherlands international must now do something special in his new role at the Pirelli Stadium, otherwise, Burton’s relegation to League Two looks certain.