It was the first match to take part in Durban during the tournament and Germany treated the stadium to a fitting christening with a compelling performance that’ll have those who wrote off this young German outfit scratching their heads.

Lukas Podolski and Miroslav Klose will take particular satisfaction from this encounter as they fired their side into a two goal half-time lead, despite a recent lack of form, while youngster Thomas Muller and substitute Cacau added second half goals.

Australia, who had began both halves encouragingly, finished the match with 10 men as talisman Tim Cahill was harshly sent off for battering into Bastian Schweinsteiger.

Germany now leads the group ahead of Ghana on goal difference, who beat Serbia 1-0 in Sunday’s earlier match in Pretoria.

“It was very important that we won because we gained a lot of self confidence,” said coach, Joachim Loew, whose side next faces the Serbians on Friday in Port Elizabeth. “We can now hope to make the last 16 with just one more win. All players were very, very focused. We did many things right but this is just the start.”

It was the contributions of captain, Philipp Lahm, Mesut Ozil and Muller that was the catalyst for German victory as an expansive game plan tore apart the Socceroo’s defence and left them chasing shadows for long spells of the match.

After only eighth minutes, Ozil found Muller in a potentially offside position and his cutback allowed Podolski to smash the ball into the net via Mark Schwarzer’s flailing arm.

Klose should have doubled the lead in the 24th minute but he blasted wide when Podolski’s cross left him free in front of goal. It was only a brief respite for the Australian goal, however.

Lahm found space and lifted a high cross into the area from the right. Schwarzer came running out to claim the ball only for Klose to nip in ahead of him and head into an empty net for his 11th goal at the World Cup finals.

After Cahill’s red card Australian hearts began to drop and Muller exploited the extra space when he created some freedom in the box to seal victory with a shot that went in off the inside of the post.

Muller had enjoyed an excellent World Cup debut and the strike was no more than he deserved to celebrate his class down the German right.

Cacau, who had just replaced Klose, then completed the scoring a couple of  minutes later after Ozil had beaten the offside trap to play in the striker to drill the ball into the net. 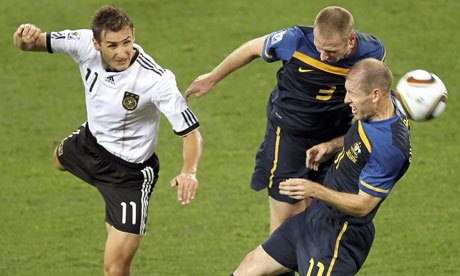 “It was not the day for us,” said a clearly disapointed Australia coach, Pim Verbeek. “They were better and the reality is the next two games we have to win. There is no discussion about that. Drawing is not enough. We have six days to recover physically and mentally and then we have to show the right spirit.”

Verbeek added Germany had shown they were a “fantastic side” and warned that no side should take them lightly on the basis of them having a young squad.

‘Every player they brought in made the team not weaker but stronger,’ the Dutchman added.

Australia now have to get back to the drawing board, but for Germany, every nation in South Africa will have just sat up and taken notice.