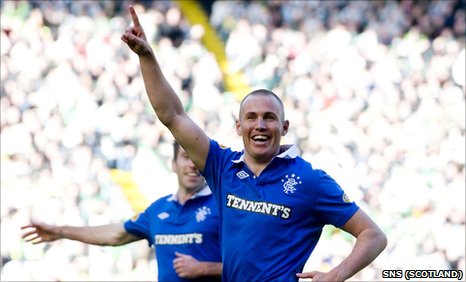 RANGERS kept up their impressive 100% record in the SPL thanks to a 3-1 derby day victory at Celtic Park after a thumping second half comeback.

A Kenny Miller double and an own goal by Glenn Loovens succumbed the Celts to their first defeat of the campaign at the hands of the Champions. Gary Hooper had put the home side ahead in injury time of the first half.

Ahead of the game, both sides had won eight SPL fixtures, a statistic which has never occurred before in the league’s history. Rangers had came back to win games on four occasions and had travelled to notoriously difficult places such as Hibernian, Hearts and Aberdeen. Although Celtic had arguably a slightly easier start, they have impressed many with their passing and style of play to win games.

The game started as an Old Firm game usually does, with Anthony Stokes going in with a horrible challenge on Sasa Papac with two minutes gone. Stokes got away with a yellow but it could have easily been a red for the ex-Hibby. Steven Whittaker slammed a shot off the post a minute later for the visitors in the first half’s real only opportunity.

A few crunching tackles went in as the first half unfolded, with Old Firm debutant referee Willie Collum perhaps being a little inconsistent with bookings for some and not for others.

Towards the end of a rather uneventful first 45 minutes, Celtic won a succession of corners. You felt as if a goal was coming, and as the ball was flicked on from the near post, Gary Hooper was there to calmly chest the ball and fire into the net past McGregor and Davis to send the home side into half time with a 1-0 lead.

Whatever Walter Smith said to the boys in blue at half time, it worked a treat. A free kick from Steven Davis into the congested box fell to Kyle Lafferty who aimed a shot at goal which scrambled its way into the Celtic net via Glenn Loovens failure to clear it. Lafferty celebrated like he had scored the goal but you cannot begrudge the man as he played very well in the match.

Six minutes later and the away end was in heaven. A poor clearance by Hoops goalkeeper Fraser Forster was met by Stevie Naismith who played in Mo Edu perfectly only for Majstorovic to come in his way, but his attempted clearance only rebounded to Kenny Miller who hit on the volley first time to send Rangers into a 2-1 lead. It was a stunning finish from the no.9 and Rangers now found themselves winning the game.

There was a big decision to make for 31-year-old Collum when Rangers substitute Kirk Broadfoot went down in the box under Majstorovic’s challenge, with the referee pointing to the spot amid protests from the home players, who felt Broadfoot had dived. It was a very soft penalty to give and no doubt there will be strong protests from Celtic.

Nevertheless, Miller blasted the ball high into the net with the aid of the post to send the champions 3-1 ahead on 67 minutes. A clean finish from the in-form hitman, who once again scored a brace against Celtic in the derby and celebrated with a passionate scream into the camera.

A free kick from Ki which was well saved by Allan McGregor was the only real chance Neil Lennon’s side had of getting anything back. Indeed, Rangers looked really dangerous on the break, with Lafferty wasting a perfect opportunity to either score or cross for Davis who was waiting at the back post.

The rest of the game fizzled out as Rangers left Celtic Park with all three points and overall a deserved victory. Celtic will feel aggrieved at the penalty decision but truth be told, they never looked like scoring against Rangers formidable defence. 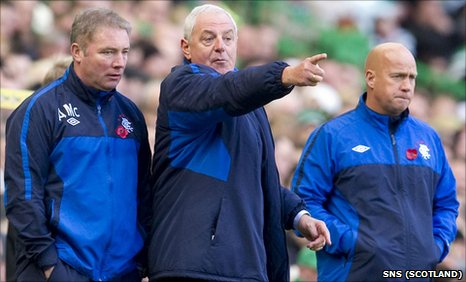 Rangers gaffer Walter Smith was delighted with the 3-1 win at arch rivals Celtic, his 27th win over them, but warned it is far too early to be predicting anything.

He told BBC Scotland:  “It’s a terrific domestic start, I don’t think in the period of time previously when I was manager, that we managed to do that. But both teams were going into it with that in mind. We’re fortunate that we’re the ones that came out on top.

Anybody who believes that you’re nine games into a season and there’s any great indication of what’s in store in the season, I’d like them to tell me. I might become a wee bit more relaxed if they could tell me one way or another what’s going to happen to us.”

Up next for Smith’s men is another away trip, this time to face Kilmarnock in the Co-Operating Insurance Cup. Next in the league is a home tie against high-flying Inverness Caledonian Thistle, where the Gers aim to make it ten-in-a-row.