Rangers will rue a number of missed chances but will still be delighted with a point after a 1-1 draw with Valencia at Ibrox on Matchday Three of the UEFA Champions League. 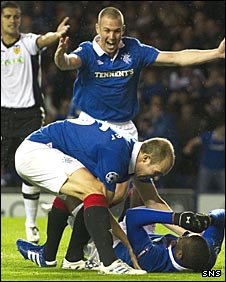 The 5-4-1, “park-the-bus”, formation was continued into the third Champions League game in a row and it would appear Walter Smith has struck gold with his much-maligned system. With Kirk Broadfoot and Lee McCulloch missing through injury, Smith had to shuffle the pack slightly and Vladmir Weiss made his first Champions League start along with rookie Ricky Foster who is loan from Aberdeen.

The SPL Champions made a slack start to the match with Valencia having over 60% of the possession in the opening 10 minutes but a swift Rangers breakaway ended with Kenny Miller hitting the post out of nothing as Cesar Sanchez paniced to clear the ball. But with Valencia skipper David Navarro receiving treatment, Rangers attacked down the right and forced a corner which would prove crucial in the game. Vladimir Weiss flung in a cross which was met by the dominant Maurice Edu who battered Cesar out the way and headed into the net.

Steven Davis then set up Kenny Miller with a lovely-weighted pass and the Rangers striker could not convert one-on-one with Cesar. The Gers then hit the post for a second time when Maurice Edu produced a superb half-volley from 25 yards which then fell to Miller and he fired over despite having an open goal to aim at. Sasa Papac had an opportunity aswell when he fired in a shot from the edge of the box which was heading for the top corner until Cesar saved well. The number of chances in the first-half showed Rangers’ dominance and they could have opened the floodgates by half-time.

However, a lapse in concentration just a minute into the second-half saw Maurice Edu head home a tame Valencia free-kick into his own net.

Valencia seemed galvanised by the own goal and the Ibrox crowd was hushed for the first time in the match. The Rangers defence stood firm and managed to thwart the crosses coming from Juan Mata and Pablo Hernandez. Rangers pushed forward again and Steven Naismith was inches away from diverting the ball past Cesar after Miller found him cleverly with a chipped pass. The chance to win the game came with 6 minutes remaining when Naismith drove into the penalty box and had a shot deflected only into the path of Ricky Foster, arguably the Man of the Match, and he skied with an open goal from just 12 yards.

It just was not Rangers’ night infront of goal but another lapse in concentration from Edu almost allowed Roberto Soldado a chance to score the winning goal on 90 minutes but Allan McGregor produced another fine save in an impressive performance from the Rangers No.1.

As the referee signalled the end of the game, it was difficult to weigh up the level of emotion inside Ibrox as some left delighted at a point and some disappointed that Rangers did not get the win they deserved after an impressive performance against Valencia.