Kenny Miller’s 6th goal in 4 games just before the 90th minute mark was the ‘sucker punch’ according to Billy Reid that secured the SPL Champions a 2-1 win at New Douglas Park. 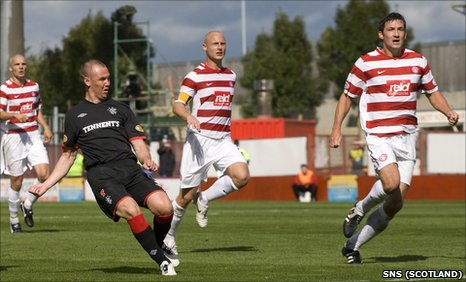 Walter Smith was prepared to rest Vladimir Weiss, Lee McCulloch and Miller from the start as the Gers racked up their 4th consecutive win of the season.

The Gers lined up 4-4-2 with Broadfoot coming in for the injured Whittaker, Lafferty in for Weiss, Edu in for McCulloch and Jelavic, making his first SPL start, in place of Miller. It was a decent start from Rangers and they converted their first chance of the match when Lafferty showed some terrific wide-play and supplied a lovely cross for Nikica Jelavic to nod home the opening goal – his first for Rangers.

Marco Paixao had an explosive start for Hamilton and had two good chances in quick succession. First, his deflected shot was tipped over the bar from McGregor and then he cut inside and fired a right-foot shot wide of the post.

Apart from the goal, it was a pretty lacklustre performance from Rangers and they were lucky to lead 1-0 at half-time. Their was a lack of urgency on the pitch and whenever we had the ball, it was likely to be hoofed up the park by Weir or Papac and gifting possession back to Hamilton. The midfield didn’t have control of the game with Edu and Davis never getting out of first gear for the majority of the match.

Just before half-time, Kirk Broadfoot limped off with an ankle injury and new loan signing Ricky Foster came on to make his Rangers debut at right-back.

Former PSV striker Nigel Hasselbaink used his rapid pace to take advantage of a poor clearance from Foster and his shot was well-saved from McGregor. But the Accies were on level terms on 56 minutes when Paixao’s cross from the left-side was unfortunately turned it by Madjid Bougherra.

The game slowed down to suit the Accies and they looked comfortable to take a point from this one, but the introduction of McCulloch and Miller made all the difference. McCulloch’s lovely right-foot pass set Miller in on goal and he lobbed Cerny to make it 2-1.

For sure, the Gers must improve dramatically if they have any chance of taking anything from Old Trafford on Tuesday.