Ghana riding the crest of another wave

Ghana, one the most successful nations in African football history, may not have much World Cup pedigree, but there is much to suggest that this is a team on the rise.

Ghana only gained independence from Great Britain in 1957, but enjoyed a fruitful period over their first decade, winning the first two African Nations Cups they qualified for in 1963 and 1965. They also finished as runners-up in the next two tournaments in 1968 and 1970, in what proved to be a highly successful period for the Black Stars.

Strangely enough, Ghana didn’t qualify for the next three African Nations Cups, before winning the tournament in their next finals appearance in 1978. These up-and-down performances continued in the ensuing years; they went out in the first round in 1980 but won the tournament again in 1982, before reverting back to a first round exit in 1984.

Their next appearance at the African Nations almost provided their fifth title, before they fell at the final hurdle due to the absence of the brightest star of the Black Stars. The team of the early ‘90s couldn’t quite match the achievements of previous generations, which many put down to the suspension of the legendary Abedi “Pele” Ayew, who missed the final. 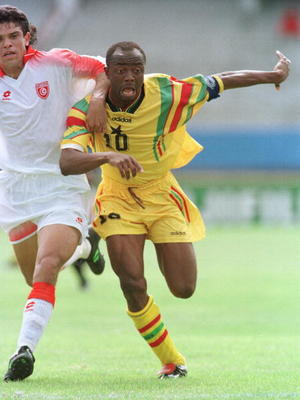 Abedi Pele Ayew in his pomp

At the age of 28, Pele, who many believe to be the greatest African footballer of all-time, was at the peak of his powers at the 1992 Cup. He was in the midst of a run of three African Footballer of the Year awards (’91, ’92 & ’93), but a Pele-less Ghana agonisingly lost the final 11-10 on penalties to the Ivory Coast after a 0-0 draw.

This marked the beginning of another period of mediocrity for Ghana, who failed to reach another African Nations final until this year’s loss to Egypt. The past few years, however, have pointed towards Ghana building another golden generation; a generation that owes another debt of thanks to Abedi Pele.

Ghana reached the final of the 2001 FIFA World Youth Championships, with much of that team (including Michael Essien and John Mensah) going on to form the core of Ghana’s team which reached its first World Cup Finals in 2006.

Ghana went into the tournament on a real high after remaining unbeaten throughout the whole of 2005, and performed admirably in their World Cup debut. Drawn in an extremely tough group, they recovered from losing their first game 2-0 against Italy to record two fantastic victories;  2-0 over the Czech Republic and 2-1 over the USA.

Ghana won the hearts of many neutrals over the course of the tournament with their adventurous and exciting football, and this was no different in the Second Round as they lost a pulsating encounter against Brazil. Although they lost 3-0, the Ghanaians fought from first minute to last and caused Brazil far more trouble than the final score suggested.

Ghana seem determined to continue this run of success, following up their World Cup debut performance with a third place in the 2008 African Nations Cup, second place in the 2010 competition and a second successive World Cup Finals qualification.

Perhaps even more importantly for their future success, Ghana won the under-20 World Cup in 2009, led by the son of a very famous father. Andre Ayew, the team’s captain and most impressive player, is the son of Abedi Pele. He was influential in the side beating both England and Brazil on the way to the title, and is just one of many from the victorious u-20 side to be promoted to the 2010 World Cup squad.

Ghana’s victorious u-20 side

Alongside him in this World Cup squad is his brother Abdul Rahim Ayew, with both of Pele’s oldest sons seemingly on their way to fine careers.

Ghana are also benefitting from a little bit of managerial stability, which has never really been the order of the day for before. They have had 21 managers in the past 18 years, making the two year tenure of current boss Milovan Rajevac seem  like an age in comparison to most of his predecessors.

Everything seems set for another momentous period in Ghanaian football, although if history is anything to go by, who knows how long it will last; just enjoy it while it’s here.