Grant: We cannot afford to lose any players 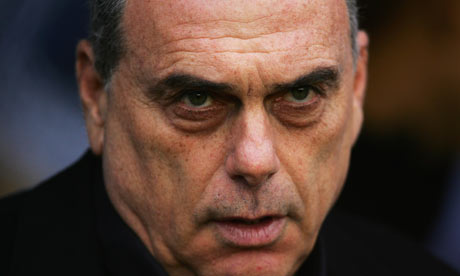 Boss Avram Grant has sent a stark warning to the owners of Portsmouth, stating the club won’t survive if forced sell their star players this January.

The club have been rumoured to have put the whole squad up for sale. Players Younes Kaboul, David James, Nadir Belhadj and John Utaka have all been linked with moves away from the club.

However, sources suggest there hasn’t been any approaches thus far for England ‘keeper David James. The 39-year-old has been heavily linked with a move to Tottenham throughout the season.

Despite the club being placed under a transfer embargo, Grant remains optimistic he’ll be able to add some new faces to the squad. Nevertheless, he wouldn’t like to see any of his current squad departing.

He said: “From a football point of view, we cannot afford to lose any players, absolutely not.

“We need to keep all the players, we even need to bring two or three more in.

“I don’t like to buy players in January, but because of the situation on the pitch, and because in some positions we don’t have any players, we need players.

“Even if I cannot buy players, we still need to stick with this squad.”

Striker David Nugent, currently on-loan at Burnley, could be recalled in an attempt to bulk up Grant’s threadbare squad.

Meanwhile, Pompey have asked the FA to talk to FIFA to ensure their players’ safety at the African Nations Cup in Angola, following yesterday’s attack on the Togo team bus.

If the players’ safety cannot be ensured, Portsmouth would like their players to be sent home. A number of clubs are offering similar views. Togo have since withdrawn from the tournament and are now encouraging other nations to boycott.

Nwankwo Kanu, Hassan Yebda, Nadir Belhadj and striker Aruna Dindane are currently in Angola preparing for the tournament, which is set to kick-off tomorrow despite the surrounding chaos emerging.

Fulham P-P Portsmouth
Jacob: The new owners have given the club a chance to survive.