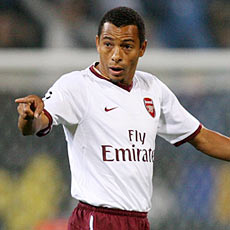 Arsenal player Gilberto Silva was full of praise for Manchester Unitedâ€™s Brazilian wonderkid Anderson. In an interview with The Observer, Silva said that Anderson can achieve great things at Man Utd.

â€œIf Anderson stays where he is, he can be fantastic. He makes the difference because he can score goals and come back to mark. He has a good technique and so much pace in his game. It’s not that easy for a Brazilian to adapt to English football in the first season, but he’s done it already – and in a new position.â€ â€“ Gilberto Silva (Arsenal & Brazil player)