Harsh but fair? The FA cracks down on alleged racism

The two recent cases regarding alleged racism, that of Chelsea and England skipper John Terry and Liverpool and Uruguayan forward Luis Suarez, have come thick and fast and the FA have clearly tried to make an example of at least one of the players as the FA announced that Suarez will face an unprecedented (in a case regarding racism) eight-match ban. It was announced yesterday (Wednesday) that John Terry has been charged by the Crown Prosecution Service, with the fate of the England skipper in the eyes of the FA still to be decided, but surely in a case with more evidence than the Suarez – Evra row should be around the 8 games ban mark as well. These losses will affect the two teams involved immensely, as Suarez has consistently been the creative spark for Liverpool since his January arrival and Chelsea will rue the loss of their captain if that situation arises. The strong ban is completely necessary and understandable, as racism is the ugly side of the beautiful game, and tough sentencing is the best way to stamp it out, but will appeals reveal that charges may be unfair?

Let’s begin by reviewing the Suarez case. Liverpool as a club and from their fan base have sounded their obvious upset at the outcome of the Suarez trial, with various statements being released by the reds regarding their full backing for the striker, and in the mid-week game against Wigan chorus’ for Suarez rang around the DW stadium throughout the frustrating stalemate. The clubs first qualm is an understandable one, the length of the trail, and the way the FA seemed to drag their feet about a decision and kept the striker unsettled for many weeks, as the date of the case was pushed back, and even when the proceedings started the decision date was pushed back. The final decision of an eight-match ban and a £40,000 fine for the tenacious forward has obviously been met with outcry by all involved from the Liverpool camp. Suarez’s lawyer has already confirmed that an appeal has been planned and Liverpool will surely take the maximum time of two weeks to lodge their appeal, to postpone the enforcement of the ban as long as possible.

The facts of the case are very mysterious and thus very hard to comment on, as most of the media, and in turn the public, have been kept in the dark about proceedings. What is known however is that in his opening statement Evra stated that ‘he did not believe Suarez is a racist’ with the FA echoing this claim. It has also been claimed that Evra’s team mates and even the match officials did not hear the alleged conversation in which the alleged racism occured, this effectively means it could be Evra’s word against Suarez’s, if this is the case it is a tricky one, as both have had a rocky history and have found themselves making headlines under controversial circumstances. ‘The Amsterdam Cannibal’ will be nickname that will follow Suarez till his retirement and few will forget the scenes depicting Evra rucking with Chelsea groundsmen in seasons past. If it is a case of one players words against anothers then Liverpool’s appeal may have some weight to it. However there are other rumours and allegations that do give some insight as to how the FA came to their decision, it has been said that Suarez admitted to saying the alleged racist term, but he was oblivious to it’s meaning in English. If this is to be believed then a defence of ignorance and an argument of the meaning of the term being different in another language is weak, especially when being judged by the English FA, who are keen to set an example of a player and take heat away from themselves following the whole Rooney ban, which is a controversial situation in itself. All in all the Suarez – Evra row is a difficult one to comment on, with little video evidence and little being revealed regarding proceedings it will be interesting to see how the appeal process (assuming there will be one) will unravel. 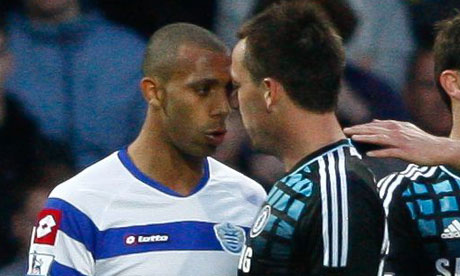 The news announced yesterday that the Crown Prosecution Service has confirmed there was enough evidence for them to charge John Terry in regards to the incident in which he allegedly made racist remarks to Anton Ferdinand in the match between QPR and Chelsea shows that there must be more evidence in this case than the one detailed before hand. Indeed there is a video circulating which Terry is allegedly caught saying words of racist intent through the art of reading the experienced defenders lips. The only real issue surrounding this case is what the FA is to do about the case. With kit makers Umbro announcing that Terry’s image will be removed from their brand, and obviously the fact that Terry may face a fine from the Crown Prosecution Service shows that there is glaring evidence against the England skipper, and following the Suarez verdict the FA will find it difficult to come to any decision that doesn’t mirror Suarez’s. This would be the correct decision, assuming he is found guilty, and whilst an eight-match ban in one racism case is an example setter, could they ask for a better subject to display an even stronger message? A ban on the nation’s captain will clearly signify the FA’s intention, and show every one involved in the game that they have an absolute zero tolerance approach to racism. That being said it wouldn’t be the first time the FA has raised eyebrows with it’s decisions, and there really would not be a lot of surprise if they are guilty of double-standards once again, worryingly the desire to save their captain might prevail over common sense and it wouldn’t be unfeasible for them to wield the full arsenal available to them and sweep the whole matter under the carpet.