How well would Mancini’s Manchester City plan B work?

Every club is keen in the search for improvement, regardless of their ambition –defending a title, contending a trophy, aiming for European competitions, or avoiding relegation. Every single way is exhausted to build an even more competitive team.

Having already owned one of the best squads inEurope, Roberto Mancini has not failed to motivate himself in further strengthening the team. ConqueringEuropeis their next target, however hard the challenge lies ahead, after drawing into a group with a combined 14 Champions League trophies.

It was not the best transfer window Manchester City have gone through, when they were more successful in parting away with fringe players rather than bringing in assets. They hit the rocks as other clubs often pushed for ridiculous transfer fees from their lucrative owner. Also, Mancini’s shortlist would be full of players who are labelled as “untouchable”. 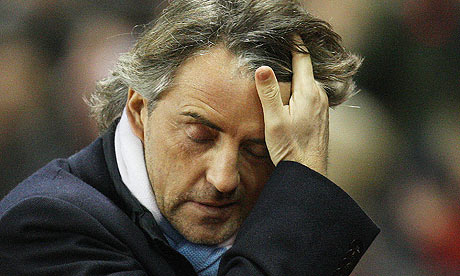 He certainly did not enjoy the summer transfer window

Amid the frustration, Mancini managed to pull the tactical talents out of his bag. Perhaps inspired by the success of his home country in Euro 2012, the Italian attempted to develop a plan B by introducing the 3-4-1-2 formation to Etihad Stadium.

Manchester City played a 4-2-3-1 or 4-2-2-2 formation last season and was unarguably one of the most effective tactics in the league, thanks to their midfield blend of attacking flair and defensive awareness, particularly the all-rounded Yaya Toure, the invaluable cornerstone who has a strong presence at both ends of the field.

Nevertheless, in the Linesman’s view, there is no invincible tactics. Not once have we seen Manchester City struggle against weaker teams who crowd the backyard to make City’s life hard. On the day when killer passes and final touches are missing, for instance the final day of last season, they are in desperate need of an alternative game plan.

The reason of their struggle is the lack of width. City’s rival Manchester United uses a similar 4-2-3-1 formation, but they field typical wingers like Valencia, Nani and Ashley Young, in contrast to David Silva and Samir Nasri, who seldom hug the touchline. Threats from the flanks originate from fullbacks’ overlapping, but they are not completely liberalised, given the weak presence in defence by their wide attacking midfielders.

3-4-1-2 appears to be an appealing solution to the problem. City is no short of attacking fullbacks, with Kolarov andClichyon the left, Micah Richards, Zabaleta, and new signing Maicon on the right. An extra defender at the back grants them more freedom to surge forward. Meanwhile, it is of no compromise to the quality of midfield. Two holding midfielders and a creative playmaker is a solid combination that is capable of controlling the game tempo and creating chances. The formation may sacrifice the playing time for either David Silva or Samir Nasri, although a 3-4-2-1 formation could allocate both as the two behind a lone striker.

While the midfield remains superior, the defence, an area Manchester City has been most proud of, has surprisingly become a massive issue. Firstly, they just couldn’t find their third reliable centreback after Vincent Kompany and Johan Lescott. Stefan Savic proves to be too raw for Premier League and has already found his way out in order to welcome young Serbian Matija Nastasic, who is not expected to be in the picture very soon. Kolo Toure is not Mancini’s cup of tea, while Micah Richards demonstrates he is more comfortable playing at right back. Mancini’s experiment of slotting Zabaleta and Gael Clichy at centreback shows he is in fact desperately running low in as well as misplacing resources.

Secondly, neither of those players has regularly, or ever, played in a 3 defenders system before. Dissimilar to Italians, Germans and Argentines, a backline of 4 is a common practice in England, where Lescott, Kolo Toure and Clichy spent most of the time of their careers in. When attacks come from the sides, confusion and hesitation arise that defenders are uncertain whether they should press the wide attackers. Inserting a fullback among the three could help the situation, but simultaneously become a risk when they are not ordinary centrebacks. Unfortunately, the lack of positioning and coordination in a 3-defender system can only be resolved by rigorous real match practice, only if Mancini dares to risk the formation more frequently. 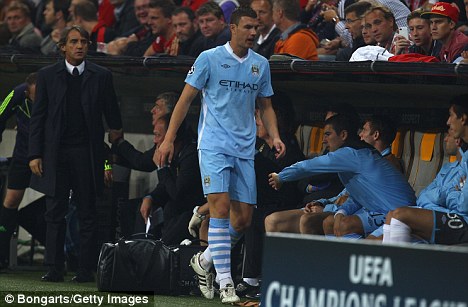 The man who needs to get off the bench more

When attack starts from flanks, ideally there should be a target for the flankers to aim at. Carlos Tevez and Sergio Aguero are both of world-class calibre, but the two Argentines are not the biggest strikers in the world. When longs balls are seldom played, they work well in a 4-2-2-2 formation. The presence of Yaya Toure also compensates the lack of physicality between the two Argentines. However, when Yaya Toure is required to be sitting deeper in a 3 defenders system, nobody has the height or the instinct to meet the crosses. Tonnes of quality crosses, particularly from Kolarov, were left unconverted in Charity Shield, also at Anfield. Edin Dzeko, one of their most efficient goalscorers, possesses the physicality they need in the box. He could be the key to help Mancini get the most out of the 3-4-1-2 formation.

There are always more upsides than downsides for having an alternative formation in the tactics book, especially of the squad of Manchester City. The versatility of the players, for example Zabaleta and James Milner, even enables them to make in-game changes in formation. The first step is always painful, as how Sir Alex Ferguson suffered in 2001 with the 4-4-1-1 formation. Having already got the assets, persistence and patience are what Roberto Mancini needs now to fine-tune the system, which he may bank on through the journey as the reigning Premier League champion.