Join the England Bandwaggon for 2010

After years of disappointment have England really started to improve? So far England are unbeaten in group 6 of their World Cup Qualifying campaign. After dissappintment with Sven Goran Eriksson and then Steve McLaren has the new man Fabio Capello brought some stability and quality to the English national teams’ football? In recent years England have been a “nearly team.” In Euro 2004, the team managed to get to the quarter finals but lost out on penalties and Wayne Rooneys’ temper was questionable. Although getting to the quarter finals was a good thing, crashing out on penalties when the semi finals were a finger tip away is never a positive experience for fans and players alike. Under Steve McLaren the England team couldn’t even make the European Championships in 2008. However, now that has all changed. Rooney has lost the anger problems that used to haunt his career and has now become an admirable player for England and a role model for young, aspiring footballs. Is this down to Fabio? England are cruising in the World Cup Qualifiers, top of the table and unbeaten. Not bad…

Capello has impressed most England fans so far with his new look England squad.

Under Capello the England team has improved not only on the pitch but off it as well. Capello has formed rules and regulations for the team and they seem to be working. The team plays with more confidence which makes the football they play good to watch. Obviously not everything is perfect yet as losses against France and Spain in friendly matches means that England are not quite ready yet but who knows by the time 2010 arrives things may be very different. So far in the Qualifying round England have produced calm collected and assured performances, which leave them top of group 6.

So far England have won all five of their games so far and are five points clear at the top of the table with 15 points. This has been a great start to the qualifying campaign and the results so far will give the team and Fabio Capello great confidence going into the next few Qualifying matches.

Fabio Capello had his first big test against Andorra but England managed to overcome a very defensive Andorra side comfortably after 2 second half Joe Cole goals. Theo Walcott started the game brightly for England but the team was unable to capitalise due to some admirable defending from Andorra. After half time Capello made some changes with Joe Cole and Emile Heskey brought on from the substitutes bench. Cole made an immediate impact when he expertly volleyed in from close range. He then scored another six minutes later when he clinically finished after some lovely interplay between Gareth Barry and Wayne Rooney. Although once the first goal was scored it looked likely that England were going to win it was not the best performance and left many critics still unconvinced with Fabio Capello and the England team. 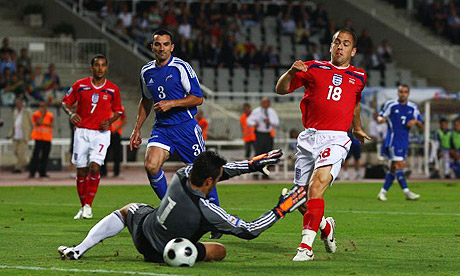 Joe Cole’s’ introduction was the turning point for England

When Theo Walcott got the nod to start ahead of Beckham many people were optimistic about what he could produce but some were still sceptical as to whether Walcott was ready to cut it at International level. He certainly proved the sceptics wrong with a stunning display in which he scored a hat-trick. England produced a dazzling display and Walcott was a revelation. After Walcott had scored his first for England his pace continued to pester the Croatian defence and in the second half Robert Kovac was sent off for an elbowing Joe Cole and this was the only sour note for England as Cole was stretchered off. However this did not stop England. Walcott then scored a beautiful second as England looked comfortable in both defence and attack. Croatia could only reply once Rooney had scored his first and England’s third before Rooney set-up Walcott for his third and England’s fourth. A much better performance in Zagreb, that set England out as the ones to beat in group six.

Theo Walcott produced a fine display to finish off the Croatians

England managed to beat a mediocre Kazakhstan side with an emphatic second half display. After a poor first half, England came out from the tunnel a new side and scored five goals because of it. Anton Ferdinand, captain in the absence of John Terry, nodded in from close range. Then a few Kazakhstan chances went by before a Frank Lampard free kick was headed into his own net by Kuchma. However then came a huge mistake from Ashley Cole who literally gave possession to Kukeyev who slotted the ball into James’s bottom corner. England were not finished though with Rooney scoring from a Wes Brown cross and then again from the substitute David Beckham’s ball in. Then it was time for Jermaine Defoe to make his mark with the fifth and final goal. Not the best of performances by England but a win nonetheless.

Rooney's double was the shining light of England's poor performance

England produced a confident display agains Belarus to beat them 3-1 to carry on the great World Cup Qualifying run of nothing but wins. Gerrard opened the scoring for England with a stunning 30 yard shot into the bottom corner to give England the lead after 11 minutes. This beauty from Gerrard did wonders for Gerrards confidence and throughout the game he performed well. However it was not all smiles for England as Belarus levelled deservedly through a Pavel Sitko header after a wondrous 23 pass move from Belarus. After the break England took only five minutes to score a second with Rooney sliding into the six yard box to finish a well deserved goal after a great run from Emile Heskey. The third goal was England and Rooney’s magic moment. Gerrard slid a lovely ball through to Rooney who expertly dummied a defender before lifting the ball of the keeper for a composed victory for England that did no harm to Capello’s growing reputation.

Steven Gerrard opened the scoring with a sublime 30yard strike

And so, we have arrived at the latest of England’s World Cup Qualifying matches. The England team walked out of the tunnel and onto the pitch wearing their new, tailored England shirts that costs the every day England fan £50, and they looked magnificent. The kit looked great and all England needed to do to top it off was to beat Ukraine. They managed to do it but in classic England style waited untill the very end to settle the victory. Peter Crouch scored an acrobatic goal after 29 minutes which looked to set up an easy England win but the Ukrainians defensive approach kept the England team at bay. Then disaster struck when substitute Andriy Schevckenko scored with only 16 minutes remaining. England were under pressure, welcome to the stage, captain John Terry. A David Beckham trade mark corner was nodded down by Steven Gerrard to give John Terry a rare chance to score a goal with something other than his head and he couldn’t fail to do so from six yards out. Another mediocre performance from England but with five wins out of five, who cares!

England look unstoppable in group six and let us hope that they remain unbeaten throughout the Qualifying Campaign!
Related Topics