As far as footballing legacies go, Oscar Tabárez and his Uruguay side have inherited one of the most renowned. With a population of fewer than 4 million people, Uruguay is the smallest nation to have won the World Cup, and their rich history in the world’s elite competition began in its inaugural year. La Celeste played host to the world in 1930, and proved to be the world’s finest, defeating Argentina 4-2 to lift the trophy. Pedro Cea was the hero on that occasion, finishing as the tournament’s second top goal scorer.

The small South American nation then picked up where they left off following the end of World War Two, winning the competition for a second time in 1950. But as Uruguay continued to become the first great powerhouse in World Cup history; reaching the semi-finals in the following tournament only to lose their first ever World Cup match against Hungary; they had to withstand a growing reputation as a side who’s success came through the zeal and at times brutality of their defensive play.

La Celeste then failed to make it past the quarter-finals again until Mexico 1970, when they made it into the last four of the competition, only denied a final place by a star-studded Brazil side, who went on to win the tournament in emphatic fashion. Enter a disappointing era in Uruguay’s illustrious World Cup History, as they failed to qualify for five of the next eight tournaments, the last of which coming in 2006.

Pele and co. run rings around the Uruguay defence in 1970

Uruguay have also been a dominant force on the continent, winning the Copa America an impressive 14 times, a record only equalled by Argentina. But the team’s competitive success can be traced right back to the 1920’s, when they won back to back Olympic gold medals.

So with Oscar Tabárez taking his country to South Africa in his second spell in charge of the nation, having previously coached the national team from 1988-1990, many will believe this is their best chance in a long time to recreate the successes of decades gone by. With one of the best squads the country has seen for some time, fans will be hopeful of progressing past the group stage for the first time in twenty years. One thing Tabárez has done is abolish the age old stereotype that Uruguay ‘kick opponents off the pitch’ and has got his team, which is now blessed with attacking talent, playing the fluid style of football which won successive Olympic gold medals way back in the 1920’s.

Having failed to qualify in 2006, a lot of this summer’s squad will be new to the pressures posed by such a prestigious competition. They last competed on the World stage in 2002, when, just like they will in South Africa, they faced France in Group A. That time round, draws against France and Senegal were only enough to secure third spot, having lost to Denmark in the tournament’s curtain raiser. 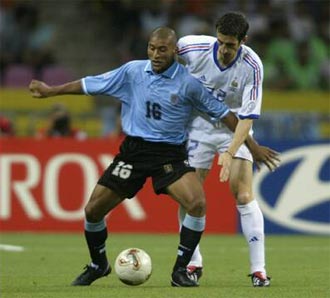 A hard-fought game against France in 2002; will it be the same story this time?

So with a population of just 3.5 million, it is impressive that they have simply qualified on so many occasions, and having won the first ever World Cup, take their place as one of the great footballing nations. Will they recreate history in South Africa? Well with modern football having left many countries including Uruguay trailing in the wake of the ‘bigger’ nations, it looks most likely that the best they can ask for is a repeat of recent history. That being said, they have always gone into the World Cup with the determination and spirit has often sees big name scalps, and that dogged fight will be present again come June.