Forlan to Lead Uruguay’s Assault on the World

With Uruguay kicking off their World Cup campaign against France on the 11th of June, Diego Lugano is the man who will lead his side out in Cape Town. But who will be the key men following him out of that Cape Town Stadium tunnel?

La Celeste are seen by many as the dark horse for the competition, and that opinion is largely down to the side’s attacking prowess.

Atletico Madrid’s Diego Forlan will undoubtedly be key to Uruguay’s fortunes in the coming weeks, having notched seven goals in qualifying for this summer’s finals. The former Manchester United striker finished as La Liga’s top scorer in the 2008/09 season, with an astonishing 32 goals from 33 matches. And Forlan will be one of the first names on the team sheet for Oscar Tabárez, and will spearhead a dangerous strike force. The 31-year-old proved his lethal finishing in high pressure situations during this season’s Europa League final, in which his brace sealed the trophy for Atletico Madrid. 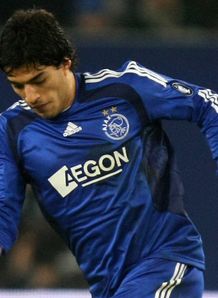 If Forlan provides the clinical finishing and striker’s instinct, his strike partner Luis Suarez provides the creativity and flair. He does get the odd goal too.  Last season, having been appointed the new Ajax captain, Suarez notched 35 league goals in 33 games (yes, you read it correctly), topping the Eredivisie scoring charts by 11 goals, on the way to being named Dutch Footballer of the Year.

His impressive goal scoring record has caught the attention of numerous Premier League clubs including Tottenham Hotspur, and will certainly be on show in this summer’s tournament. Suarez also netted five vital goals in qualifying, after making his debut in 2007. And his partnership with Diego Forlan will be the linchpin of Uruguay’s hopes of progressing from a tough Group A.

Diego Lugano will captain Uruguay this summer, and will be the one charged with keeping equilibrium in a team blessed with attacking talent. He is an “old-fashioned centre-half”, who will put his body on the line for the cause. Anything that comes within the parameters of his defence, he will sweep up and clear from danger. And he can also be handy in the opposition’s box as well, having scored 14 goals for Fenerbahce since moving to Turkey in 2006, with 4 international goals to his name as well.

The defender had the most successful season of his career to date with Sao Paulo in 2005. That year he lifted the Campeonato Paulista, the Copa Libertadores, and FIFA Club World Championship, as well as being named South America’s best defender.

As for the rest of the squad, Óscar Tabárez has only named 7 defenders in his preliminary squad of 26, which is set to be cut down to 23 on Tuesday. The defence is the area in which the team will be most vulnerable if the side succumbs to injuries, but the first choice back four will be of high quality.

Also of note is the fact that only three members of the squad ply their trade in Uruguay, with the rest gaining big match experience in either Europe or South America. The full squad is as follows: