The Group A spotlight is now firmly on France, after failure to punish a ten man Uruguay. The previous two meetings between the sides ended goalless, but it seemed as if both sides had accepted that that same fate was inevitable. It is now all to play for in the group, as there was no separating South Africa and Mexico in the opening match.

Raymond Domenech’s controversial decisions were highlighted by players, fans and pundits before the match, as the squad pushed for the manager to reverse his decision to leave Thierry Henry on the bench. Florent Malouda was the other notable omission from the side, after a reported training ground bust up, in a sluggish game seemingly crying out for the Chelsea man’s conviction.

France had the better of the early exchanges, and when Franck Ribery rolled the ball across the six yard box, it looked as if Sidney Govou would turn it in to give them an early lead. But the winger’s touch was too deft, and it sailed past Muslera’s post. Yoann Gourcuff then gave the Uruguay ‘keeper something to do, as he was forced into a save from a clever free-kick which looked destined to sneak in at the near post.

As the first half wore on, it seemed that Les Bleus were already running out of ideas. Uruguay were proving impenetrable with some superb, if sometimes last ditch, challenges. Diego Godin looked on superb form at the heart of Oscar Tabarez’s defence, putting his body on the line to deny Anelka early on. His defensive partner and captain Diego Lugano, however, looked shaky, and his clearences seemed to be magnetized to the French midfield.

Whilst France’s creative midfield of Ribery, Gourcuff and co lacked inspiration, La Celeste’s usually potent attack of Luis Suarez and Diego Forlan were struggling to retain the ball in their attacking third. The Atletico Madrid striker forced Lloris into one decent save, as he cut inside and rifled a shot at the Lyon ‘keeper, but the pair were being stifled by the French defence.

The second half started in much the same fashion as the first half ended. Neither goalkeeper was being troubled too much, and as the game drifted by it was Uruguay who would have been the happier of the two teams. But still, it was Tabarez who acted first to liven up the game, bringing on the exciting attacking midfielder Nicolas Lodeiro; but Domenech was still reluctant to admit a need for change and France’s ineffective attack stayed on the pitch. Lodeiro did look lively, linking up the midfield and attack, but was booked shortly after coming on, as he rolled the ball back to Evra for a free-kick and the referee saw it as kicking the ball away. 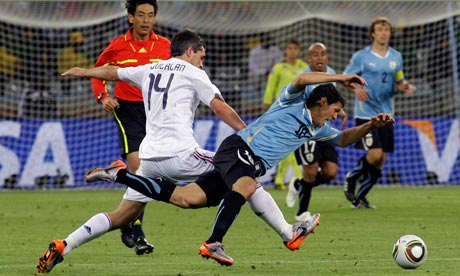 Toulalan gets stuck in on Gonzalez

With only around ten minutes remaining, Lodeiro lunged in on Sagna, and the referee wasted no time in brandishing a second yellow card, and sending the second half substitute his marching orders. The Ajax midfielder had been the spark of the team as they overcame a tight play-off with Costa Rica to book their place in South Africa, but his dismissal meant Uruguay would now have to play the remainder of the match with ten men.

By this time, the overdue introductions of Henry and Malouda had been made, and what followed as France scrambled to try and find a winner was sure to provoke a furious response from households across Ireland. Thierry Henry struck the ball onto the arm of Victorino, which he tried to withdraw, and claimed for the penalty.

In the end, that was the closest France came to producing anything tangible, and the game ended in a goalless draw which will certainly be looked upon more favourably by La Celeste. With all four teams in Group A level on one point, Uruguay now face hosts South Africa, knowing that a win would put them in pole position to qualify. For 1998 winners France, they will have to overcome Mexico.