I’m now onto my third Npower Championship preview of Leicester City’s opponents 2011/2012. This time I set my focus on Blackpool, the Seasiders set the Premier League alight last season, but unfortunately for Ian Holloway’s side they tailed off towards the end of the campaign and eventually felt the force of the deadly drop, as they were relegated back to the Championship at the first attempt, can Holloway conquer the Championship this season or will the Seasiders settle for a mid-table finish…

Blackpool Preview
After a memorable season in the Premier League Blackpool sadly said goodbye to the first tier, as despite a cracking start in 10/11 the Seasiders failed to match the promise they showed in the first half of the season, as they eventually felt the force of deadly relegation. This now means that Blackpool will take part in the Npower Championship after a season away from the second tier; pundits may well claim that Blackpool will be the weakest of the three relegated sides; however manager Ian Holloway has resulted in some superior signings as most notably striker Kevin Phillips and the experienced Barry Ferguson have joined the club. The Seasiders love to play a brass of attacking football and they will certainly have threats coming from the wide flanks, they will look to score a handful of goals in the 11/12 campaign but the defence also needs to be secure. Ian Holloway’s side are capable of another promotion; however with the Npower Championship being a formidable division, a premature return to the Premier League may well be out of the question. 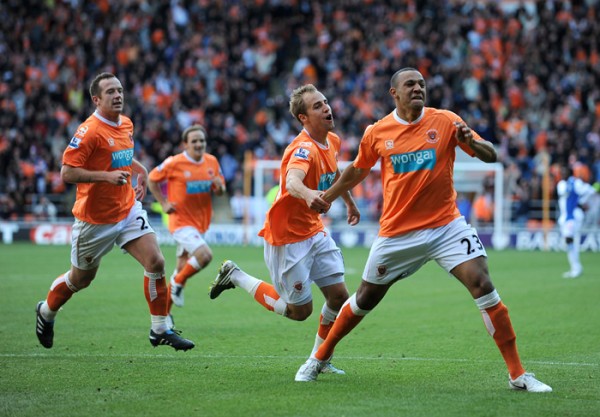 Key Players
After the departure of Charlie Adam to Liverpool, the Seasiders will now have to pursue a new breed of players which will be influential to their promotion challenge. With Adam being the key part of the Blackpool side, replacement candidates to be the key players for the Seasiders will be knocking on the door in the early stages of the season. Some names that have potential include wingers Matt Phillips and Gary Taylor-Fletcher, both players made an impact in the Premier League last term as highly rated Phillips caused plenty of problems. Signed from Wycombe the 20 year old tricky winger will have a big part to play, meanwhile Taylor-Fletcher is more established than young Matt Phillips. Taylor-Fletcher can play as a winger and as striker, capable of scoring goals and causing opposition defences headaches he will also be a vital part of the Blackpool side. Finally 38 year old “Super” Kevin Phillips has entered the fray at Bloomfield Road, even though he is coming to the end of what has been an illustrious career, he can still score goals on a regular basis. This proves that Blackpool has plenty of attacking threats for the season ahead.

Manager – Ian Holloway
Ian Holloway is one of the most eccentric and colourful managers in English football, with his comical impression and his serious quotes the former Leicester City boss has brought a vast of quality attacking football to Bloomfield Road over the past two seasons. Securing promotion via the Play-offs in season 2009/2010 after many pundits clearly wrote the team off at the start of that campaign, Blackpool then amazed football fans last season, by beating the likes of Liverpool and Tottenham but Holloway couldn’t manage to keep the Seasiders afloat, as they were eventually relegated back to the Championship. Holloway has vast experience with numerous Championship sides, he will most likely cause conflict between the media but the 48 year old is clearly backed by Chairman Karl Oyston, this season Holloway could well manage Blackpool to another successful season whether that includes another promotion is an entirely different matter.

Overall Thoughts
Blackpool is very capable of another promotion push, Ian Holloway’s style of play should warrant them with a decent finish. Ian Evatt and Alex Baptiste in defence is a solid partnership, while the experience of Barry Ferguson will certainly help. Blackpool’s major threat will come from the wings; however due to the departure of Charlie Adam, and with Dj Campbell also possibly heading out of the exit door they could lack goals. They should reach the heights of the play-offs, but staying in the top six for the majority of the season is unlikely. Prediction – 9th