Liverpool – How Will The Team Cope In Steven Gerrard’s Absence?

Any Liverpool fans’ blood will have been boiling in the 84th minute of England dyer and meaningless loss to France on 17th November. In my opinion one of the world greatest players sustained an injury playing in a hapless, woeful and simply pointless Friendly exercise that we as England fans have become so accustomed to. How will Liverpool be affected by Steven Gerrard’s absence in the coming weeks? Can the club brave the storm? or will it be a very cold December at Anfield? I’d like your thoughts.
Firstly, my opinion about England Friendly matches during a hectic domestic schedule is that they simply should not happen. Whilst I do not support Liverpool myself, I can sympathise with Liverpool fans who might now see a torrid start to the season continue into 2011. Gerrard’s inclusion and subsequent injury that arose from the Friendly raises various debates, which I intend to focus on briefly.
Should Liverpool be allowed to tell Fabio Capello how long Steven Gerrard can play for?
Firstly, Liverpool pay Steven Gerrard his wages each week as part of a contract he has signed with the club. I would therefor concur that the club do have some right in advising how long they would like to player to be involved for; particularly during a busy domestic schedule that has not started well.
On the other side of the coin, one may suggest that Gerrard’s inclusion in the England team is an honour that he should fulfil to the best of his ability, regardless of Liverpool’s thoughts on the matter. Fabio Capello stated after the match that he agreed Gerrard would play “an hour if possible”. What really angered me from England’s perspective, is that Capello (in reference  to Gerrard’s 84 mins on the pitch) afterwards suggested that the team needed a “senior player on the pitch”, particularly considering Rio Ferdinand and Gareth Barry had been substituted prematurely. Forgive me, but am I sorely mistaken, or should all players in that squad be considered ‘senior players’? I know what Capello meant, but the meaningless nature of the game meant that he realistically could have had England Under 18’s playing that night and it would not have made a scrap of difference. 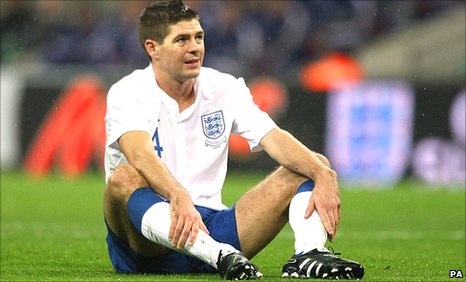 I honestly believe that in Gerrard’s absence, Liverpool are a significantly weaker team; so much so that I would not write off any team in the Premier League beating them on their day. The media reported that The FA has agreed a £500,000 compensation package in light of the injury; one similar to Theo Walcott and Jermaine Defoe’s similar cases. If reports are to be believed, this sum should pay almost exactly what Gerrard will earn in his four-week absence. So with the wages taken care of, what is left? Liverpool will of course be nursing the player through his injury, so perhaps a higher sum would have been sufficient.
How will the table look for Liverpool fans in four week’s time in light of his absence?
Roy Hodgson was quick to pull the plug on any potential rift between the club and The FA; something I think must have been very difficult. Hodgson stated that “”I don’t expect apologies from anyone and I’m not prepared to add any fuel to the fire,”. Liverpool now face Tottenham (A), Villa (H) and Newcastle (A), as well as two potential banana skins against FC Utrecht in the Europa League (H and A). Let us not forget that Liverpool comfortably beat West Ham 3-0 at the weekend. However, facing Tottenham at White Hart Lane on Sunday is going to prove a far tougher test to say the least.
To conclude, December will be a very tough month in the Premier League as the table starts to take its’ familiar shape. Granted, there are some exceptions this season, but I can see Liverpool being a country mile from their usual Top 5 come January. Liverpool currently lie 9th in the League, with a negative goal difference and tough time ahead. Gerrard also leads the way with goals this season for Liverpool (7 in 15 apps).
I hope that Liverpool can ride the storm and pick up points in December. If Ashley Young had picked up a similar injury I would have been a fuming Aston Villa fan. My fingers will be crossed. Luckily, England’s next Friendly match should not come until August 2011 (Holland at Home), giving us 9 months free of any pointless England Friendly exercises!
DH
Related TopicsLiverpool

Hodgson Finding Life At The Kop Tough
With yet another loss, can we discount Liverpool as a contender for the Big Four?