Liverpool may have beaten West Brom 2-0 at the Hawthorns but the spotlight falls on a certain Uruguayan striker wearing red. Luis Suarez came to England without the best of reputation, having been suspended for seven matches by the Dutch FA for biting a PSV player. It’s no surprise that he has his controversies until now, although none of them were going to be worse than biting another player.

Aside from the racism accusation being meted out on him recently, all attention is now on how Suarez tends to fall down ever so easily. Put it simply, he’s being given the tag of a ‘diver’, which sure isn’t doing his reputation any good. Saturday’s match against West Brom saw Liverpool win a seventh minute penalty when Suarez was fouled inside the box after a clash of bodies. My first thought was that it sure looked like a foul although the referee was willing to wave play on until he saw his assistant waving his flag furiously to signal a foul.

Needless to say, the West Brom players were furious themselves and Hodgson couldn’t hide his disbelief on the sidelines. Paul Scharner labelled it a “nice dive” as journalists and football analysts started to scrutinise whether it was really a penalty. If you count commentators comments (no pun intended) as valid, then include them as well.My question isn’t whether it was a penalty or not. It would be, was it a dive? Wait, is that the same question? In any case, I took a look at the video highlights leading up to the penalty. If you observe closely, after the challenge by Jerome Thomas I think that ended up with Suarez on his knees and hands, there were a few half-hearted shouts from players though not the fans for a penalty. And I’m referring to the few seconds after the foul and prior to the assistant referee waving his flag.
As we all know, whenever a player goes down in the box, his teammates will automatically raise their hands or cry out for a foul even if they didn’t see it happening. And if that said player was playing away, the cries of the away fans for a penalty can easily drown out the home fans. However, it is important to note that very little of these happened when Suarez went to ground. 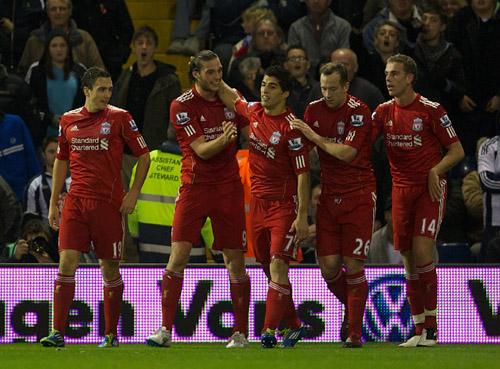 He didn’t get on the scoresheet, but Suarez took the plaudits for both goals
(Source: www.liverpoolfc.tv/news)
Going further, we can look at Suarez’s body language itself. The instant he went down, there was no indication that he wanted a penalty. His facial expression didn’t change, he didn’t look at the referee nor did he try to prolong his stay on the ground, instead getting back up after a few moments. This could possibly show that he didn’t think it was a penalty as well otherwise given his nature as a player, he’ll probably be having a word about it with the referee already.
Having said all that, we can, or perhaps I can, safely assume that Suarez did not dive AND the whole penalty came about due to the assistant referee’s own discretion especially considering Lee Mason, the referee for the game, waved play on. So the story is, Suarez fell down after a clash of bodies, no one, including himself thought it was a penalty, the assistant thought otherwise and voila, penalty given. Liverpool were certainly not going to dispute that right?
Thus, let’s not take away the fact that Suarez had a great game. He didn’t score any goals but he had a direct impact that led to both goals, with his pass for Carroll’s goal ever so immaculate. I doubt this will be the last controversy surrounding Liverpool’s current talismanic player but let’s not allow that to get in the way of any future success.
Related TopicsEnglish Premier LeagueLuis SuarezSuarez