Liverpool’s patience may finally start to pay off

They are no longer the team with the most top-flight titles. They are no longer in the Big Four. Even the Merseyside is painted in blue this season. King Kenny could not restore the order. All hopes are on Brendan Rodgers. His erratic change in playing style led to some comical errors at Anfield, but it seems the patience of the fans has finally paid off. Liverpool shakes off their miserable start of the season and is back in the race for a European spot. Luis Suarez may be the star of the team, but Brendan Rodgers’ contribution should never be written off.

Kenny Dalglish’s British imports were far from effective. Brendan Rodgers did not think twice and released Charlie Adam and Andy Carroll, who both do not quite fit Rodgers’ short-passing game, even this left him with only two senior strikers — Borini and Suarez. Rodgers waited patiently until January and brought in Daniel Sturridge. The transfer raised doubts from Sir Alex Ferguson, but Sturridge proves him wrong and was only one goal short to embarrass the legendary manager at Old Trafford. Comparing to his fellow countryman Theo Walcott, Sturridge shows he is a more capable and dangerous striker. Although the partnership with Suarez has yet flourished, Sturridge offers more variety in Liverpool’s frontline and is able to liberate Suarez. 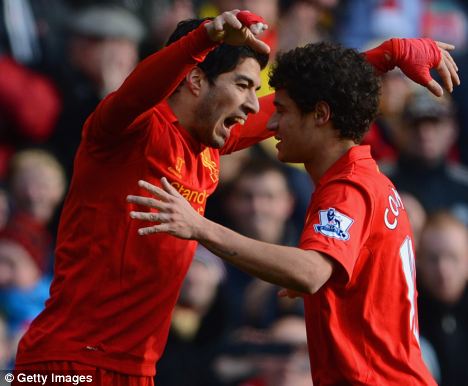 Apart from refuelling strikers, Brendan Rodgers rightly addressed the problem of creativity shortage at Anfield. Nigging Coutinho from San Siro appears to be a bargain deal as the Brazilian wasted no time to show his flair and football intelligence in his home debut against Swansea. Playing Coutinho on the left prevents him from being the centre of attention of the rough English defence, but not limiting his freedom to create in order to share the workload of aging captain Steven Gerrard (who has played every minute of Liverpool’s league games so far). Brendan Rodgers clearly has thought it through on how to utilise his acquisitions in the transfer market.

Brendan Rodgers does not only work hard in scouting and acquiring new players. His squad management ability is also of exceptional quality. Having not the deepest bench in Premier League, the former Swansea manager enhances the squad depth and promotes competition by actively introducing young players. Andre Wisdom, Suso, Jonjo Shelvey and Raheem Sterling are given a lot of first-team opportunities, let alone important matches against the top teams. While they might not get everything right at the first go, Rodgers tolerates the individual learning curve and does not easily step back despite the fans’ criticism. Having enormous backing from the manager, the youngsters’ confidence would only grow and are increasingly contributing to the team. Raheem Sterling is notably the most successful promotion of Rodgers this season, having even earned his first senior international cap last November.

The focus on youth development does not only benefit the youth players, but also reinvigorated the seniors. Stewart Downing, after a hugely disappointing debut season, was asked to play at left-back if he wanted to survive in the team. A surprise switch of role between Jose Enrique and Stewart Downing was rewarded with some good results. All of a sudden, Downing is like a new leaf, playing with enthusiasm and confidence, regaining the starting position on right wing. 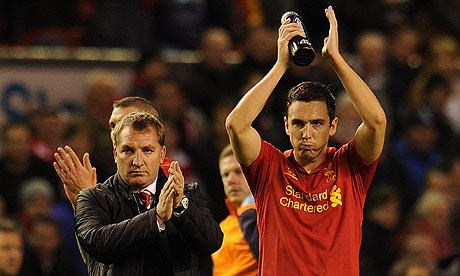 Being able to inspire the players (maybe except Nuri Sahin) is a good sign. Getting the tactics right is also a key to Brendan Rodgers’ recent success. Blending Sturridge and Coutinho into the team in a short period of time is no easy task. Getting service from Downing also seems to be miraculous. He also dropped the under-performed Joe Allen, one of his favourite players, to the bench. The healthy Lucas is indeed a better fit as a holding midfielder to accompany Steven Gerrard, and he had definitely quieted the red-hot Gareth Bale in the victory over Tottenham last weekend.

Once plummeted to near the relegation zone, Liverpool is back in the top of the table and is a serious contender for European football. They played some good football at the Etihad and Emirates earlier in 2013, despite being unable to hold onto the lead; but certainly it brought them more self-belief. Having not got an overwhelming support from the fan at the start of the season, Brendan Rodgers has overcome lots of barriers and led Liverpool to a strong comeback (Chelsea fans might want to learn from them). Well done to Channel 5 for the anticipation to film the documentary “Being: Liverpool”. It is indeed such a roller-coaster but entertaining season for Liverpool.