VALENCIA Club de Fútbol is a  football club based in Valencia, Spain. They play in La Liga and are one of the most successful and biggest clubs in Spanish football and Europe.

Valencia have won six La Liga titles, seven Copa del Rey trophies, two Fairs Cups which was the predecessor to the UEFA Cup, one UEFA Cup, one UEFA  Cup Winners’ Cup and two UEFA Super Cups. They also reached two Champions League  finals in a row, losing to La Liga rivals Real Madrid in 2000 and then to German club Bayern Munich on penalities after a 1-1 draw in 2001. Valencia were also members of the G-14  group of leading European football clubs. In total, Valencia have reached seven major European finals, winning four of them.

Despite losing star players David Villa to Barcelona for £34.2m and David Silva to Manchester City for £24m, Valencia still hold some star quality in their squad.

Pablo Hernandez, Juan Mata, Albelda, Vicente, Soldado. Just some of the talent on show at the Mestalla. Fortunately Joaquin is ruled out through injury, otherwise he would have been highlighted as a player to watch. Valencia currently sit fourth in La Liga after seven games, level on points with Barcelona and Villarreal, and trail leaders Real Madrid by a single point. 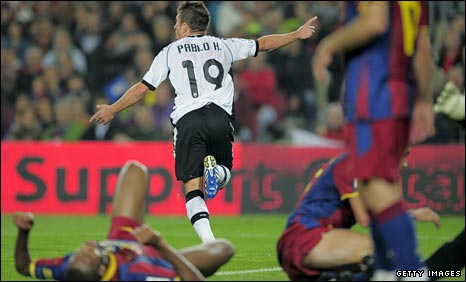 At the weekend they dominated much of the play away at the mighty Barcelona, took a first half lead but eventually lost 2-1 to Barca. What you have just read in this article is testament to the task Walter Smith and his troops face tomorrow night at Ibrox.

The wily old fox will most likely go with the 5-4-1 formation that has served Rangers superbly in their two previous outings in this years competition. With Kirk Broadfoot struggling with injury and Lee McCulloch ruled out, Smith will have to reshuffle the pack for the game. Andy Webster or Ricky Foster may even be asked to fill in the five-man defence, with Steven Davis and Mo Edu sitting in midfield. Lafferty, Naismith and Weiss will compete for the left and right midfield slots. No other option will be considered but hitman Kenny Miller up front on his own.

If Rangers are to get a result in this game, and we will have to if we have any ambitions of reaching the Last 16 for a second time, then the team will have to combine hard defending with a bit of attacking.

But also, the role of the Ibrox faithful is crucial. The players definitely had a positive reaction to the red-hot atmosphere three weeks ago, and the Bears can play their part again on Wednesday.

He told rangers.co.uk: “I just hope the fans are in the same voice as they were for the Bursaspor game because I have to say I thought our fans were fabulous that night and there is no doubt they helped our boys to victory.

I think the fans are now appreciative of the fact that in these European games we can’t go mad and attack all the time. We have to be tactical and the supporters are aware of that.”

And a key player for the Gers since joining from Fulham, Steven Davis, is fully aware that they have a huge task ahead of them. Davis said: “Your home games are the games which will get you through and we have managed to beat Bursaspor so this game is a massive one in terms of where we are going to go in this group.

You want to get as many points on board as soon as possible and so far we have done well but that will mean nothing unless we build on that, and so it is important to get a result tomorrow night.”

“European nights are great to be involved in. There is usually a great atmosphere, and on the back of a couple of good results to start with, tomorrow night will be a great game and a great atmosphere. But we know what we are up against and we will have to be at our best.”

However, it is not all one-way in the fear of opposition.

Valencia’s Spanish international winger Pablo Hernandez says he and his team-mates will have to beat a world-class goalkeeper to overcome Rangers. Hernandez was part of the Spain team that eventually beat Scotland 3-2 last week, despite a man-of-the-match performance by Allan McGregor.

And Hernandez expects McGregor to be on similar form at Ibrox on Wednesday. “He made some amazing saves, it was a fantastic performance,” Hernandez told BBC Scotland.

The former Getafe winger added: “Certainly had it not been for him we would have scored a few more goals on Tuesday.

“But obviously he was one of a few Rangers players playing for Scotland and who have been playing at that level and at European level for some time, so it’s going to be a very difficult match.”

The Rangers fans have a huge part to play at Ibrox as usual, and hopefully raising the roof will inspire the players. A positive result for us will give us momentum going into the huge derby at Parkhead on Sunday.