Brendan Rodgers retained the majority of his 4-3-3 lineup which lost 3-0 to WBA with Coates replacing the suspended Agger. Downing, despite not playing in mid-week’s Europa match, remains on the bench to make way for the 17-year-old Raheem. Man City reverted to the semi-5-3-2 formation they tried in the community shield after surviving the 3-2 scare against newly-promoted Southampton last week. Kolo Toure, Kompany and Zabaleta started as centrebacks with De Jong and Yaya Toure sitting in front of them. Nasri, Tevez and Balotelli – getting the nod ahead of Dzeko once again – roamed up front with Kolarov and Milner took care of the flanks.

It was a slow start for the home side as but clearly the champion had little clues to penetrate the crowded Liverpool half. Tevez’s diligence was their best hope. As always, his runs behind defenders caused problems, notably having a swerving low ball rolling across the goal line only to find his teammates thinking he couldn’t have kept the ball in bounds. Rodgers’ men, however, slowly warmed up and controlled the tempo. The midfield trio offered a combination of good work rate and decent passing. Young Sterling was a highlight as his technique and speed constantly embarrassed Kolo Toure. He could have claimed an assist if Borini had not send his sweet cross between the City defenders wide of the post. 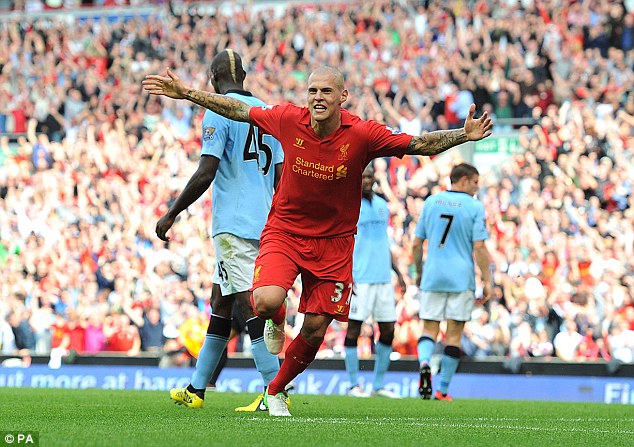 Skrtel gave Liverpool  a deserved goal with a cannon header from Gerrard’s corner. It could have been 2-0 shortly after the break if Suarez had better contact on Borini’s through ball in a fast break. Yaya Toure’s close range strike following a cross from the omnipresent Tevez gave City hope but minutes later when Rodwell, who came on for Nasri, handled Gerrard’s shot as he slid in, Suarez swerved the 25-yardish free kick round the ball and in the bottom corner of Joe Hart’s goal.

A mistake from Reina failing to get to Tevez’s cross gave City a goal and a more detrimental error from goalscorer Skrtel gave City a point. His back pass under pressure from the left back position found Tevez who calmly rounded the keeper to level the scores with 10 minutes to go. The Kops put up a convincing display against the champion at home as they seemed to have adapted to Rodgers’ philosophy of possession and attacking football; yet there will be more food of thought for the manager, as these mistakes will never go unpunished in the world’s best football league.

Man of the Match: Carlos Tevez once again showed Mancini who was the boss as the Italian manager needed to thank his outcast to spare his blushes. The Argentine was literally all over the Liverpool half and was the most reliable source of threat as City failed to conjure any magic in a Silva-less lineup. His strength, pace and quick feet were all sorts of trouble, especially the raw Kelly and Coates, and even though his presence was felt, Liverpool did not sufficiently subdue him as the miniature forward was directly involved in both City goals. 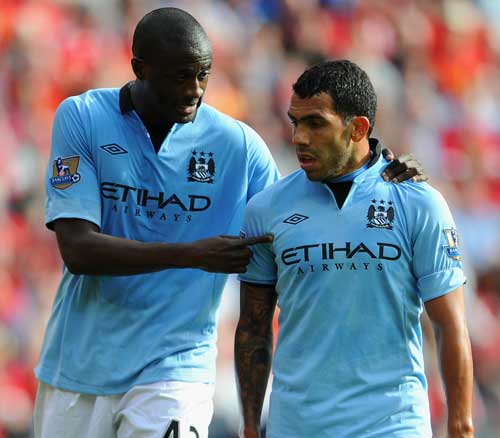 Flop of the Match: Aleksandar Kolarov was never known for his defending abilities, but more as a set-piece specialist. In a formation which requires a player to take care of the whole flank, Kolarov was humbled by his counterpart James Milner – in terms of stamina and work rate. The Serbian was as clueless in attack as he was in defence, overlapping with either Nasri or Zabaleta. Despite Borini not giving him much of a challenge, nor did Martin Kelly who rarely overlapped, the space was not exploited to add an extra dimension in City’s dull attack. It is interesting to know why Kolarov still stands a fight against Clichy – who was not even on the bench – for the starting leftback position.

What if Dzeko started the match? Edin Dzeko will always be wondering what he has to do to climb up the pecking order. He was always Mancini’s emergency call for goals and he has rarely failed to deliver, notably the final match of last season as well as last match against Southampton. His aerial presence as well as his ability to score with both feet is an exceptional quality for any centre forwards and he has already proved himself in the Premier League last season. However, the return of outcasts Tevez and Balotelli forced him to sit out on the bench. Tevez’s recent form is convincing but it was a disappointing night for Super Mario. If Mancini continues to start him instead of the Bosnian, Dzeko should really be looking to ply his trade elsewhere, even if it means giving up on one of the sweetest paycheques he has ever seen.

What if Manchester City dumbed the 5-2-1-2 / 3-4-1-2 formation? It brought Mancini a win at in the Community Shield as well as a draw today but it is definitely not a successful implementation. Using Zabaleta who is not a natural centreback or a faulty Savic are already signs that Mancini does not have the most basic requirement for such formation – 3 proper reliable centrebacks. Athletic wing backs and a strong target man are also crucial, but Kolarov and Balotelli could not deliver on this particular night. A true tactician does not fit his players into an ideal formation but instead devises an ideal formation with the players he has got.