It was a close contest that never should have been >>> 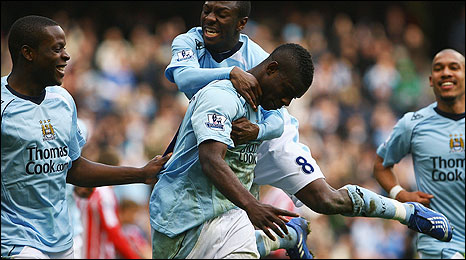 Shay Given (GK) – Given was booed constantly during the game from the Sunderland fans and he seemed to do well to blank it out, especially on some short back-passes which he could have easily messed up. Looked sharp in the first 30 mins but once Steed Malbranque was given some room and created a few chances he didn’t look very confident and this shone throughout the second period as his punching from several corners was shambolic. Still a hero after the UEFA Cup game and always will be, but needs to work on his kicking and co-ordination with the back four.  6.5

Micah Richards (RB) – Micah was having one of his best games for City until injury forced him off late in the second half. He looked up for it today and was at his attacking best, making some sublime over-lapping runs with SWP and knocking some great balls into the box. This was evident as he won the penalty which should have been buried. Didn’t look his usual agitated self, he looked calm, cool and collected at the back. Back on form, superb game and superb goal. 9.5

Richard Dunne (CB) – Dunne is really finding his form again this year after an awkward and disaster-prone start to the season. He looks like a very confident player and with a little bit more communication at the back he will certainly be back on top form. Very good in the air against the mighty Jones and made a superb last ditch challenge to stop what looked like a certain goal from Andy Reid in the last ten minutes. Another outstanding game from the skipper who has been faultless recently. 8.5

Nedum Onouha (CB) – Nedum is without a doubt England quality and Capello should surely now realise this. He has been stunning recently and looks a rejuvinated player since he was given the chance to shine after one of Dunne’s red cards before Christmas. Physically very strong and again delivered an astonishing performance today against the power of Jones and the pace of Cissé . Dealt with balls into the box effectively and gave strikers ample time on the ball before taking the ball right back off them! Looks very assured and confident and should welcome an extended run in the team. Keep it up! 8.5

Pablo Zabaleta (LB) – I must say, I knew he was a versatile player, but LB?! Come on Sparky, are you that concerned about Garrido and Ball? Unbelievable! I always prefer Zaba when he has an attacking role but he did well today having probably never played in that position before! His passing was inch perfect (most of the time) and when he had to play it with his left foot he did rather well. He supported Robinho in a fair amount of attacks and held the line at the back. Would like to see him CM though for the next game. Quiet but very effective. Ever so dependable. 7.5

SWP (RM) – Not sure whether it was me but he looked very tired before the end? He bamboozled the defenders with his magical skills and looked very confident on the ball in the first half but dropped in and out of the game during the second period. Very wasteful when in possession in my opinion. Numerous times late on in the game he ran and ran and ran where he should have played an easy ball into the feet of Bellamy who was a pair of fresh legs. Well supported by Richards – 6

Vincent Kompany (CM) – A very, very, very brave man opting to play with a serious toe injury. In my opinion we should have rested him. However he was eager and to play and his hunger shone on the pitch. Like Zabaleta, there were no BIG moments for him but he tackled well and it was nice to see him have a shot every now and again. One of the best signings this season, just what City needed. Strong both physically and mentally. Provided good support when Sunderland attacked and cleared the lines when a simple ‘boot out’ was needed. Taken off late on in the game to a good ovation. Once his toe has healed he will be another star figure. 7.5

Nigel de Jong (CM) – Sat very nicely infront of the back four. He never stops moving and he never stops tackling! Even when there is no chance of him winning the ball he will always try. A very committed player who plays a clever game with Kompany, having previously played alongside him for Hamburg. Today he was on fire, slide tackle here, slide tackle there, header here, header there. For a small bloke he gets up very well in the air. Nice to see him use his voice today too and get people around him doing what he wants, such as off the ball running e.t.c. Very confident and very agile, super game, at ease with the pace of the game and the standard of football on show. A future captain for sure. 9.5

Robinho (LM) – I really don’t know what to say. Has absolutely no confidence at all. Out of the eleven players on the pitch he had the least confidence, so god knows why he wanted to take the penalty? He is in need of a desperate rest, so may I suggest starting him from the bench for away games? His penalty just oozed woe. I knew he would miss it, and what’s with the stutter? That put himself off more than the keeper? He saw the keeper lean to the right so he put it….to the right?! Didn’t have a positive impact on proceedings, would have prefered to see Garrido bomb it up and down the left wing, at least he would give 110% and fight for his place? I think we should sell him, I’d take Drogba? His passing looked out of sync, as if no-one around him knew what he was planning, so he just rolled it back to the defenders and ended up in our half? 5.5

Elano (AM) – Again, another superb performance, one of his best for a very long time. His passing was simply sublime and his silky skills were stunning to see! (I think I used too many words beginning with ‘s’ in that sentence!) Created many chances but not sure why he gave Robbie the ball for the penalty instead of having the confidence to step up and score like he did on Thursday. He tracked back very well and defended valiently when necessary. Linked defence to attack and always wanted to get the ball. Gave 125% today and fully deserves to play a few more games. Whether it is on the left hand side instead of Robinho remains to be seen but his work ethic and tackling today were astonishing. 9

Valeri Bojinov (ST) – This match was the first time he had started a first XI game for 19 months and you never would have guessed that. Despite not being fully fit (hence why he came off at the end) he offered something different. He had agression and desire. He held the ball up very well, not quite as well as the Welsh legend Ched Evans, but I will let him off! He also has a wiked shot! The freekick he took would have ripped through the net had it gone in! Took his chance very well and should look forward to a bright future. 8.5 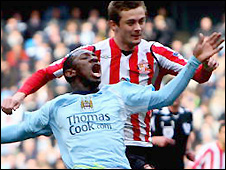 Craig Bellamy (ST) – Great to see the Welsh monster’s desire to do well. Managed to chase all the lost causes and should have been set up a couple of times by the greedy SWP. Typical fiesty stint!

Gelson Fernandes (CM) – Came on for the last 5 mins and got booked. That’s all I can say really?

Thoroughly enjoyable game with many clear cut chances. Ref handled the game and the players very well. There should have been a few more goals, but 3 points is 3 points right?