Starting the new season at St James Park, Alan Pardew fielded nearly his best lineup, only without injured captain Coloccini. Cabaye, Ben Arfa, Demba Ba and Papiss Cisse were all cleared to play. Players demonstrated tonnes of confidence. Despite Cisse and Ba not at their fittest, the midfield performed admirably. Ben Arfa was the crafter, while Jonas excelled as the tireless soldier.

Nevertheless, there is still room for improvement in defence. James Perch was not put under enormous pressure, but fullbacks were crying for help. Jonas teamed up with David Santon to stall the runs by Lennon several times, with the only exception which led to Gareth Bale hitting the crossbar. Danny Simpson was forced to fight off Bale without much help from Ben Arfa, the projected right wing in the starting XI. Pardew needs to re-weight the balance of letting Ben Arfa get loose in offence and filling the void on the flanks in defence. The 4-3-3 he played in 2nd half is very threatening, but could be exposed by good wingers.

The high defence line rejuvenated in Tottenham’s jersey, in a slightly altered fashion. Centrebacks were deeper than where AVB normally prefers, with everyone else roaming around the midfield line.  It was a significant improvement to Tottenham, as this lessens the chance of their shaky defence being exposed. The tactics were more effective with Sigurdsson starting in place of Van der Vaart, who only reported back from Netherlands duty. 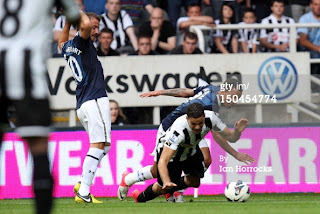 Midfields were no short of energy, but the playmaking department was missing. Without a major distributor in central midfield, Lennon and Bale were often asked to do more than they should to start an attack from scratch. Jermain Defoe was very sharp, but he either had to, or preferred to work on his own. The passes were just lacking in the final third, which came from Modric, Van der Vaart, or even Adebayor last season. When Tottenham turned to Harry Kane for the final push, their desperation for a striker became more obvious. AVB still has a lot to work on before claiming his comeback season.

Brow-Raiser: Undoubtedly the start of William Gallas. Nobody would have imagined the 35-year-old would fit in the high defence line, but AVB needed some leadership on the field. His partnership with the solid Younes Kaboul did not disappoint the fans too much, but Demba Ba’s goal clearly stated he is in decline. When captain Dawson comes back fit, Gallas won’t be expected to feature as much as he used to.

What If Jenas came in for Livermore? Three Lions debutant Jake Livermore is a decent defensive midfielder. When it comes to attack, he is still relatively raw though. Jenas has only just come back from injuries, but his passing range was what Tottenham was missing in the game. With Sandro already there protecting the backline, was it possible to give Jenas 25-30 minutes of run-out when they were trailing?  Or maybe Huddlestone who was not on the bench? AVB might have gone a bit too conservative for a large part of the game.

Player of the Match:  It would have easily been gone to Ben Arfa for his match-winning contributions, but Jonas deserves recognition for his enormous work rate. Starting on the left flank, he spent his effort more on closing down Lennon. When Ben Arfa promoted to a more advanced role in 2nd half, Jonas covered even more ground to maintain the balance of the team. He was the invisible contributor to the victory. 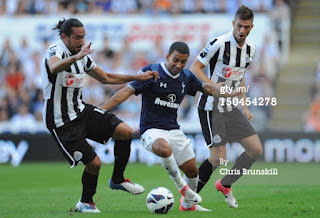 Flop of the Match: There were clearly high hopes in Sigurdsson, which might have also over-stressed him. He did well in executing AVB’s defence plan. However, apart from the freekick, his long shots were far from threatening, as well as below-par passes. In his first appearance at a top-tier club, he seemed to have gradually lost the confidence as time went by. Surely not the ideal debut for the Icelandic midfielder.