Oleguer Presas Renom is a Spanish defender born on February 2, 1980 in Sabadell.

Oleguer started his career at the modest hometown club Lepanto. In 1997 he joined UDA Gramenet, making his senior debut in 2001. When he was 21 he signed for the FC Barcelona B team and made his debut for FC Barcelona in 2002 during a Champions League match between BarÃ§a and Galatasaray. During the following season he played for both teams, on occasion being a last minute addition to the senior squad.

He is a speedy and incisive defender and embodies the youth development philosophy of FC Barcelona. He usually plays as a right back, but due to repeated injuries to central defenders in the 2004/2005 season, he was often paired with Carles Puyol. During the 05/06 season, he challenged Juliano Belletti for the right back position, as he presented a more defensive alternative to the more offensive Brazilian. 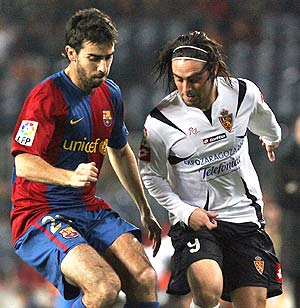