A scintillating Cristiano Ronaldo double put Portugal into the European Championship quarter-finals and sent the Netherlands out.

The Dutch needed to win by two clear goals to stand a chance of progressing and Rafael van der Vaart’s lovely curling strike put them ahead.

But the Netherlands faded badly and Ronaldo equalised by slotting in from Joao Pereira’s precise pass.

Nani set up Ronaldo to drive in the winner as Portugal eased to victory. Ahead of the match Portugal remained unchanged for the third consecutive game. Netherlands on the other hand made three changes as striker Klaas-Jan Huntelaar, playmaker Rafael van der Vaart and centre-back Ron Vlaar come into the side in place of defensive midfielder Mark van Bommel, winger Ibrahim Afellay and centre-back Johnny Heitinga.

From the off the Netherland were the more attacking side and after just four minutes Wesley Sneijder had an effort from deep inside the area but put his shot just to the left of the goal. Next up Rafael Van der Vaart took a shot but Felipe Joao Moutinho got a block in.

With Holland looking dangerous it wasn’t that surprising they went ahead in the tenth minute. Robben created the goal when came in from the right-hand flank and played a short, simple pass to VAN DER VAART who was on the edge of the area. Veloso was slow to close him down and Van der Vaart eked out a beautifully controlled left-footed shot which bent perfectly into the far corner. Rui Patricio had no chance.

Despite Holland looking dangerous Portugal were still a threat with Cristiano Ronaldo having an effort from the edge of the area on 15 minutes which hit the post. Helder Postiga then took a shot which was saved by Maarten Stekelenburg. Ronaldo was coming to live and he made an impact 28 minutes when he finally got his name on the score sheet. Willems pointlessly gave away possession close to the halfway line and Portugal worked the ball forward with speed through Joao Perira who waited for Ronaldo to make a run and played a perfect through ball. There was never any doubt that RONALDO would beat Stekelenburg as he scored from inside the penalty area to the bottom right corner of the goal.

Portugal were now looking the more threatening team side and looked likely to take the lead in the 29th minute when Nani smashed in a left-footed shot from just outside the box which only just missed the target. Ronaldo and Nani were taking it in turns to have a pop at goal but Stekelenburg was standing strong. At the other end Van der Vaart was just as determined to take the lead but again Patricio was standing strong.

There was little to choose between the sides as they went in at half-time but the good news was that as things stood Portugal were progressing to the next round of the tournament.

The second half started at a very slow pace with real end to end football being played but neither team looked interested in scoring. Holland were getting a couple of promising free-kicks but despite poor marking from the set-pieces by the Portuguese the Dutch couldn’t deliver in a dangerous ball.

The ball was in the back of the net on 60 minutes from a Portugal corner after some lovely work from Ronaldo who lined up to shoot but instead crossed to Postiga who was a yard offside. Portugal responded by bringing Postiga off and replacing him with Nelson Oliveira.

Holland were winning the possession battle but were giving away the ball too easily. Willems again gave away possession on the 66th minute and Portugal broke with Ronaldo unselfishly played to Moutinho who shot from the edge of the area which took a good save from Stekelenburg to deny him. That poor pass was the last touch of the game for Willems who was replaced with Afellay. A defender for a striker as Holland made their last throw of the dice.

Portugal were by far the better team as Holland’s shape was falling apart and the Selecção were growing in confidence. They should have taken the lead on the 72nd minute when Ronaldo presented the ball to Nani on a plate. A beautiful ball from the left nutmegs Van der Wiel and gave Nani a sitter at the far post but played it straight at Stekelnburg.

Luckily that missed chance didn’t matter when Portugal did take the lead on the 74th minute courtesy of Ronaldo again. A marvellous counter attack after Robben lost possession on the edge of the Portugal area was worked quickly to Nani on the right who returned the favour to Ronaldo by supplying him with an excellent diagonal pass that cut the Dutch defence open. RONALDO controlled, beat Van der Weil and calmly slotted into the bottom corner.

It was nearly three for Portugal two minutes later with Nani doing well on the right again, which was hardly surprising given that Holland didn’t have a left-back, and slid a low one into the six yard box. Moutinho and Ronaldo stretch to get on the end of it but it fell kindly for Stekelenburg. This was followed by more pressure for Portugal with Bruno Alves getting above his man on the far post and heads a cross back across goal, but he was penalised for a push in the back.

At the other end Van der Vaart was agonisingly close to drawing level when his wonderful curling shot from just outside the area left Patricio well beaten but hit the bar. Portugal broke again, with Nani in the thick of it down the right who attempted to lob Stekelenburg but the ball landed on the top of the net. Nani was then replaced by Rolando as Portugal tried to hold out for a few more minutes.

Robin van Persie attempted to make a name for himself a minute from the end after a nice through ball from Sneijder but his dragged his shot wide. Van Persie really should have buried it, you expect he would have if he was wearing an arsenal shirt, and his miss summed up Holland’s campaign at the Euro’s they had been handed countless chances but their misfiring had put them out of the competition.

The evening was rounded off by another cracking shot from Ronaldo who was denied a hattrick by the bottom of the post. 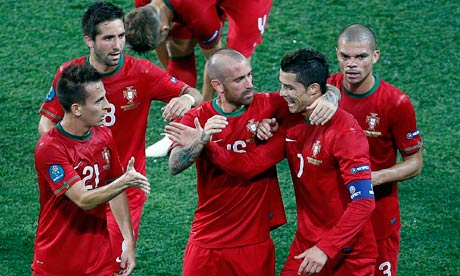 If at the start of the competition someone would have told me the Netherland would finish bottom of Group B I would have laughed in their face but now that’s happened who really cares because Portugal have progressed to the next stage of Euro 2012 defying all odds.

It’s amazing how dire Holland were but more importantly Portugal seemed to finally come to life. The key to that was Ronaldo getting his confidence back and hopefully he keeps his form up now as it will definitely boost Portugal’s performances in the later rounds. Nani also played a major part in the win and although he still hasn’t managed 90 minutes at the competition he has been the source of most of Portugal’s creativity.

Perhaps rather worryingly is the Selecção’s defence still looks very leaky, luckily Holland didn’t have their scoring boots on but against stronger teams that could be an issue.

Rui Patrício – 6
Beaten at his far post for Rafael Van der Vaart’s opener, and almost beaten once again by the Dutch midfielder, but an otherwise solid outing for Portugal’s number one. Greater tests lie ahead, but Patrício appears up to the task on tonight’s showing.

Bruno Alves – 5
Another rugged display from Alves, and another combination of good and bad. The Zenit man produced a number of excellent intercepting headers, but his distribution was once again suspect, and some slack marking might have resulted in a De Jong goal.

Pepe – 8
Once again outstanding at both ends of the pitch. Pepe rendered the potentially dangerous Klaas-Jan Huntelaar a virtual spectator, and even instigated the move that led to Ronaldo’s second. The player of the tournament for the Selecção, so far.

Joao Pereira – 7
A typically spiky performance from João Pereira – at one point Nani could be seen telling his teammate to keep his head – but one with considerably more positives than negatives. A sublime assist for Ronaldo’s equaliser saw the Valencia-bound man channel his days as a raw winger at Benfica.

Fabio Coentrao – 7
Not as explosive as he was against Germany and Denmark, but Coentrão was nevertheless a vital cog in Portugal’s at-times devastating counter-attack play. Combined well with Ronaldo and was generally in the right place defensively as well – although he was bamboozled by Robben prior to Van der Vaart’s opener.

Miguel Veloso – 6
As was the case against Germany, Veloso was culpable in the opening goal for not closing down with the requisite haste; but as against Germany, that one lapse should not entirely obscure another quietly effective display from the Genoa man. Will be vital in the latter stages.

Raul Meireles – 6
Before having his evening abruptly ended by Nigel De Jong, Meireles was enjoying himself, rumbling around the central areas and generally getting stuck in. Can in the end be forgiven for lashing an early chance into the side-netting when Ronaldo was in space to his left.

Joao Moutinho – 8
No Portugal player benefited more from the Netherland’s lax attitude towards tracking back. Enjoying the space denied to him by Germany, Moutinho was an effervescent presence throughout the 90 minutes, with the highlight a perfectly weighted pass for Nani, which led to Ronaldo’s second.

Nani – 8
One gaping miss aside, another brilliant performance from Nani. Provided an assist for Ronaldo and deserved a goal himself, after a performance that oozed invention and trickery. A constant thorn in the Netherland’s side, and almost every bit as threatening as Ronaldo.

Cristiano Ronaldo – 9
Not a bad way to answer your critics. Ronaldo’s response to the rational (and slightly less-so) questions thrown his way over the last four days was a performance that defined the phrase ‘clutch’ (to borrow from American sports terminology). Two clinical finishes, a focus that simmered with intensity, and a good old-fashioned maniacal celebration. Superb.

Helder Postiga – 5
Somewhat overshadowed by the performances of those either side of him, Postiga’s ‘moment’ came early on, when he dragged an eminently presentable chance wide (Stekelenburg’s fingertips notwithstanding). Then proceeded to run himself into the ground, with the usual lack of reward.

Nelson Oliveira
Another thirty minutes for Nélson – this one less eye-catching than the first two. With Portugal in control his darting runs were less essential to the process.

Custodio
Came on to replace the winded Meireles, and played his part in shoring up the midfield late on. A deserved moment for a player who has revitalised his career over the last eighteen months.

Rolando
Largely introduced in order to give Nani an ovation, as far as this writer could tell. Barely had time to make an impression.

Portugal will now face Czech Republic in the first quarter-final match of Euro 2012 on Thursday.