Kenny Miller’s late winner secured a third straight victory for the SPL Champions after a tight game at Ibrox against St Johnstone. 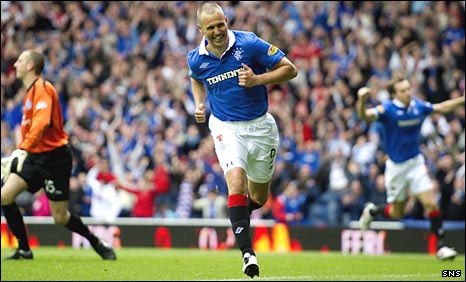 Miller’s goal eleven minutes from the end was the deciding goal and St Johnstone manager Derek McIness claimed Miller barged Alan Maybury as he roamed through on goal thanks to McCulloch’s inch-perfect pass. McIness said: “I thought Alan Maybury was barged to the ground. We just feel a real sense of injustice.”

Vladimir Weiss made his Ibrox debut after an impressive cameo appearance at Easter Road last week, but was very quiet early on as St Johnstone grabbed a hold of the game. The away side took the lead in spectacular fashion after 25 minutes when Jody Morris’ corner went straight to Danny Grainger at the edge of the box who fired home a fine left-foot shot into the net. It was a well-crafted goal for the visitors with Samuel breaking away to pull Weiss from the right-hand post which was where Danny Grainger accurately sent the ball past McGregor.

The Gers equalised through a scrappy goal when Vladimir Weiss’ backpost cross was met by Steven Naismith and his header across the face of goal was scrambled towards goal by Sasa Papac, but defender Kevin Rutkiewicz couldn’t stop the ball crossing the line despite his best efforts.

The early spells of the second-half was very end-to-end but neither side was creating any good goalscoring chances. The closest Rangers came was a 20-yard shot from Lee McCulloch which went just past the post. The lack of urgency and penetration forced Walter Smith into bringing on £4m striker Nikica Jelavic for his Rangers debut and he replaced the hard-working James Beattie. Jelavic made an immediate impact creating the first major chance of the second-half when his excellent cross found Steven Naismith in the box who headed straight at Graeme Smith.

The home side had a few claims for a penalty with Rutkiewicz blatantly handballing inside the box and winger Vladimir Weiss was booked for a minor tug despite being fouled for the whole game which infuriated the Rangers fans. This sense of injustice sparked life into the home crowd who spurred their team on to a late winner when Lee McCulloch’s lovely pass sent through Kenny Miller who finished past Smith in the Saints goal. Miller’s goal puts him well clear at the top of the SPL goalscorer standings with 5 in just 3 games.