A thoroughly entertaining, end-to-end and incident packed match at the KC Stadium finished all square today. City will be disappointed that they failed to take all three points, but Hull will feel they did enough enough to warrant a share of  the pieces.

The first 40 minutes of this match more resembled Shakespeare’s play, A Comedy of Errors, than a Premier League football match. Both sides started brightly but Hull took the lead after 15 minutes, when a horrendously under-hit backpass from City’s Israeli defender, Tal Ben-Haim, only playing becasue of Richard Dunne’s suspension, allowed Daniel Cousin to take advantage and poke the ball under the body of the advancing Joe Hart. To add further misery to City, Hart was injured whilst attempting to make the save and, despite trying to continue, had to be replaced by Kaspar Schmeichel.

The match was an entertaining affair, with both the Tigers and the Blues enjoying decent possession of the ball. However, despite all the neat football, there weren’t many clear cut chances. The visitors finally got the goal they were craving for, and just like any good dinner, it arrived on a plate. Another terrible error, possibly worse than Ben-Haim’s earlier, following Robinho’s through-ball, allowed City midfielder Stephen Ireland to finish under pressure to level up the scores. The defender in question was Kamil Zayatte, who intercepted the pass only to knock it away from Boaz Myhill in the Hull net, and into the path of Ireland.

The Irish midfielder was in the thick of the action again moments later, and this time he put City ahead with a delightful, placed finish that curled majestically beyond the despairing dive of Myhill. A fantastic move involving Robinho and Javier Garrido culminated in the Spanish left-back crossing the ball for Ireland to finish. At half-time, City led 2-1.

Hull, clearly boosted by the words of boss Phil Brown, came out fighting at the start of the second half. Geovanni saw an audacious overhead-kick fly narrowly over, before seeing one of his free-kicks fly high and wide. Just moments later, however, Hull were awarded a highly contentious free kick, given for a raised foot by Shaun Wright-Phillips that only the referee, Phil Dowd, deemed serious enough to warrant a foul. Geovanni stepped up, and with the aid of a large deflection off Vincent Kompany, curled the ball into the bottom corner, past the wrong-footed Schmeichel. This gave Hull a much-needed boost and the home side continued to press forward in search of a winner. 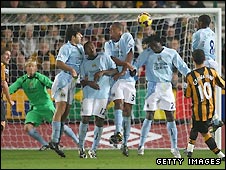 In the end, niether side fashioned out a clear-cut opening in the final half-hour, and the game finished in a 2-2 draw.

Man of the Match – Stephen Ireland.