Firstly, I want to apologise in advance for the length of this blog, and also for the fact that instead of my usual post-match review describing the action, this will be a more descriptive account, detailing what happened during the whole day.

The experience of an away European match is a highly entertaining and emotion filled one, and along with a vast number of fellow City die-hards, I arrived at the airport at five in the morning for a 7:00am flight. This was my first ever game in Europe, but I was blissfully unaware of the depressing result to follow.

After having nearly all day in the centre of Santander to soak up the atmosphere, I arrived at the ground an hour before kick off, seeing the whole of City’s reserve team outside the ground, with them having lost 2 – 1 to their Spanish counterparts earlier in the day. The layout of the ground was bizarre, with Santander fans sitting directly behind the away supporters, and only a plastic dugout for protection. As kick-off approached, the seats next to me were taken by a couple of Spanish speaking adults, who turned out to be the parents of Blues left back, Javier Garrido. Just like an eager schoolboy, I politely asked them to sign a picture of Javier that was in the City magazine, and when they saw this picture, his mother came out with a fantastic line, ‘He’s very handsome’. All I’m going to say is that he looked nothing like his mother!! 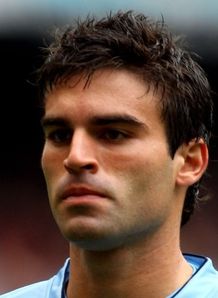 The game started and it was clear from the off that City weren’t up for the fight. We were already through to the next round, where we will face FC Copenhagen of Denmark, whereas the Spaniards required a win to stand a chance of progressing. Blues boss Mark Hughes rested key players, such as Vincent Kompany, Shaun Wright-Phillips and Stephen Ireland, and gave a chance to a number of fringe players. The atrociously horrendous Swiss midfielder Gelson Fernandes made a rare start, as did promising young Welsh striker Ched Evans.

It was the home side who started the stronger and they took a deserved lead in the eighteenth minute when a quick free-kick caught Darius Vassell unawares, and when Kasper Schmeichel could only parry the cross, Jonathan Perreira was on hand to give Santander the lead. The Blues were defending terribly, with Israeli international Tal Ben-Haim looking particularly culpable. Oscar Serrano doubled the home side’s advantage with a neatly taken finish after a lovely exchange of passes with Perreira. Half-time arrived, and as news filtered through that Paris Saint Germain were beating FC Twente 2 – 0, it became clear that Santander needed to score another couple of goals to be certain of qualifying. The half-time chat among the City supporters was whether Hughes should be given the sack or given more time, and there was no shortage of opinions flying around. Brazilian (star) Robinho was taken off at the break to be replaced by Stephen Ireland after a jaw-droppingly poor first-half. An unborn baby would have influenced the game more than Robinho in the first period, such was the lack of interest from the attacker. The final nail in the coffin came when Santander scored their third goal, courtesy of a Juan Valero finish after a cross was not dealt with. Could it get any worse for City?

Well actually, it could, as Ecuadorian striker Felipe Caicedo came off the bench to replace Evans. As he bustled onto the field, a hearty rendition of, ‘He comes from Ecuador, We’ve never seen him score, Caicedo, whooooaaaah, Caicedo, whooooaaaaaaaahh’ rang round the stadium. However, the travelling supporters were to be shocked, when, moments later, the striker placed a neat finish into the bottom corner to notch a consolation for the Blues. Incredulity swept through the Blues ranks – Caicedo had honestly scored!! ‘He comes from Ecuador, We’ve actually seen him score, Caicedo, whoooooaaaaahh, Caicedo, whoooooooaaaaaaahh’ was then sung by the City fans. 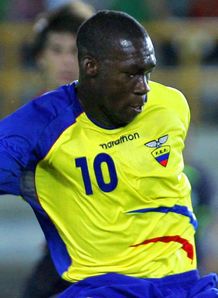 The game promptly finished with the score at 3 – 1 after an awfully depressing performance from the away side. With the final whistle blown, it was notable that only goalkeeper Kasper Schmeichel came over to the fans to clap us, whereas the rest of the players just walked off, ignoring their supporters. The bus journey back to the airport was entertaining with one fan exclaiming, ‘Caicedo, I f***ing love him!’ and another demanding that Darius Vassell needs to be given a new five year contract! And so the day ended, arriving back in Manchester in the early hours of Friday morning.

Schmeichel – Possibly at fault for the first goal, and looked shaky throughout – 5

Zabaleta – Part of defence that struggled, but he was the only one who tried anything attacking – 6

Garrido – Tried his best, but he is left open by lack of defensive cover on the left – 5

Vassell – One of those players who commentators describe as ‘hardworking’, ‘gives 100%’ and ‘covers every blade of grass’, but they really want to say he is useless. Out of position on the right, but isn’t good enough anywhere – 3

Hamann- Too slow. Was overrun a number of times during the game. Hughes should appoint him as a coach – 3

Fernandes – Utterly and totally dreadful. Runs around like a headless chicken and has no skill whatsoever. How he is a professional footballer, I will never know – 2

Elano – Everything he tried failed, but at least he got rid of his dreadlocks! – 3

Robinho – Dreadful. I said last week that he needs a kick up the backside – maybe I should drive to the training ground and give him one? – 2

Evans – No support up front and had a lack of service. Too early to judge yet – 4

Ireland – Stuck out on the left wind, but at least he looked interested – 5

Caicedo – It says a lot when he is possibly the best player. Somehow, he got a goal, and at least I can say that I was there when he scored – 6

Men of the Match: Pablo Zabaleta and Felipe Caicedo