Firstly, I would like to apologise for the lack of a preview for this match. I must admit that I completely forgot about the blog yesterday, but I can promise, hand on heart, that this terrible occurrence will never happen again!!

I HATE MARK HUGHES!!! Another underwhelming and massively disappointing performance from City have left Blues boss Hughes fearing for his job. The home side took the lead partway through the second half after a quick break following a City corner allowed Gianni Zuiverloon to slip a pass through for former Aston Villa striker Luke Moore, who calmly slotted the ball under the body of the advancing Joe Hart. With time running out, and City desperately pushing for an equaliser, who else but prolific Ecuadorian goal-machine Felipe Caicedo, fresh from his goalscoring exploits in midweek against Racing Santander, who provided a delightful back-heeled finish that took a deflection and squirmed tantalisingly into the net. City were level and with only injury time left to play, surely they would not concede an injury-time striker as happened recently against Everton. But if you could put money on one team to mess things up, it would be City, and they duly obliged, when, in the penultimate minute of the match, Roman Bednar scored with a header to hand the Baggies a much-needed three points and condemn City to another defeat, leaving them without a win in the past nine games.

After resting a numbers of key players in midweek, City boss Mark Hughes brought back his star names, including Stephen Ireland, Joe Hart, Vincent Kompany and Shaun Wright-Phillips. Captain Richard Dunne also returned, in place of Israeli international Tal Ben-Haim, after the birth of his baby, whilst Zimbabwean striker Benjani made a miraculous recovery from his injury after it was predicted he would be out for a ‘number of weeks’. For some unknown reason, Hughes decided to replace the much-improved Javier ‘I’ve got his parents’ autographs’ Garrido with Michael Ball, therefore depriving City of any attacking flair down the left. Brazilain trio Robinho, Jo and Elano all missed the game for various reasons, with Hughes claiming that Elano had the ”flu”. Funnily enough, this was the same reason why Roque Santa Cruz missed the Blackburn game yesterday, just days after saying he would like to leave the club!!

The game was an open affair, and although few clear-cut chances were created, it was a highly entertaining and watchable game. Bednar hit the post was a powerful shot, but it was City who fashioned out the best chance of the half, when, moments into injury time, Benjani fired woefully over after taking the ball off Micah Richards’ toe.

The second half was also enjoyable, with Shaun Wright-Phillips firing straight at Scott Carson after a good cross from Pablo Zabaleta. However, just minutes later, with WBA having broken following a City corner, the ball found Moore, who scored his first goal for the club. City needed a goal urgently, so who better to bring on than Felipe Caicedo, scorer of his  first goal for City in midweek. And guess what … courtesy of a deflected back-heel that somehow found the net, the Ecuadorian striker notched the equaliser for the Blues. What a player!!! 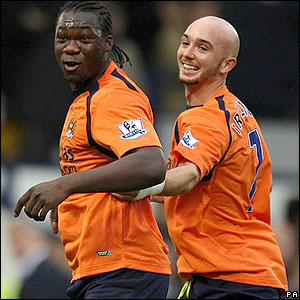 However, just as City thought they were going to attain a share of the spoils, West Brom stuck a dagger through the heart, with full-back Zuiverloon finding Bednar with a beauty of a cross, and after Micah Richards gave up on the challenge, the Czech powerhouse looped his header over Joe Hart to win the game for the Baggies, and cue chants of ‘You’re getting sacked in the morning’ towards City gaffer Mark Hughes.

Hart – Maybe at fault for the winner when he half-came for the cross, but needs a better defence in front of him – 6

Zabaleta – Likes to get forward, but maybe needs to curve his attacking instinct in the final moments of a game – 7

Richards – Looked shaky again and needs to communicate better with Dunne!! Was at fault for winner – 4

Ball – In the side to replace Garrido and did OK. Would be nice to see him at left-back with Garrido on the left of midfield – 6

Fernandes – A mind-bogglingly, jaw-droppingly atrocious player. No positional sense and no skill on the ball. City’s worst ever player since Georgious Samaras!! – 4

Ireland – Stuck out on the left, but needs to be more central to have an impact – 6

Vassell – Finally, he was placed in his preferred position up-front, but still did nothing – 5

Benjani – Rushed back from injury, but at least he looked interested – 6

Man of the Match – Shaun Wright-Phillips