Everton put together an inspirational performance to beat Manchester City at Goodison Park. They were undoubtedly by far the better team of the afternoon, but Roberto Mancini’s tactical errors helped to make David Moyes’ mission to recover from the shocking FA Cup exit easier than thought.

This had to be the key mistake Roberto Mancini made that cost the match. Two clean sheets in a row with Gael Clichy starting at left back was not convincing enough. Instead, the Italian chose to start Kolarov, a decision maybe only Seamus Coleman would agree. Regardless of whether Mancini was playing a 4-3-1-2 or 3-4-1-2, Kolarov obviously is far from capable to defend the flank on his own, let alone in such a physical clash. 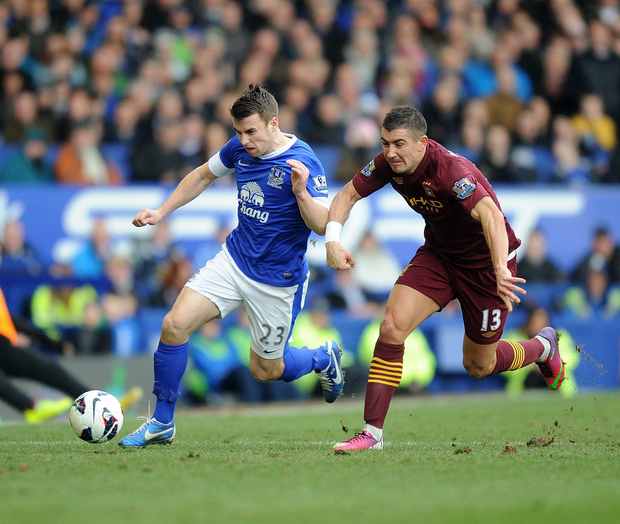 While James Milner and Pablo Zabaleta were able to quiet Steven Pienaar and Leighton Baines, an identified strength of Everton’s attack, Kevin Mirallas and Seamus Coleman had an enjoyable afternoon torturing the Serbian defender. Mirallas nearly caught Kolarov retreating late following a cross, only to be ruled offside questionably. Seamus Coleman was also clinical in the build-up to Leon Osman’s fantastic goal. David Silva’s lack of incentive to track back made things worse , but Kolarov also looked clueless and even uninterested in his own defence duty.

Having made no contribution in his own strength — dead-balls delivery, Kolarov was unarguably the weakest link of Manchester City this afternoon. If Mancini was to complain about all dubious decisions against his team, maybe he should first reflect on this self-destructive decision of his own.

It is a well-known fact that Everton is more than competent in the air. Coupled with delivery specialists like Leighton Baines and Steven Pienaar, corners and freekicks are a threatening weapon of Everton’s attack. Roberto Mancini chose to stay with his zonal defence and made no adjustment towards Everton’s towering height, despite already missing his big men Vincent Kompany and Yaya Toure.

None of the conceded goals came directly from freekicks or corners, but City was constantly on the back-foot in dead-balls. Matija Nastasic luckily escaped from a penalty call after Marouane Fellaini controlled the ball with his chest with ease following a corner. Sylvain Distin also narrowly missed a clear header in the second half when Toffees was down to 10 men. Although it went unpunished, putting the defenders and goalkeeper under pressure throughout the match is never ideal.

Jose Mourinho did not think twice to put Luka Modric into the lineup after Nani was sent off. Meanwhile, Mancini wasted 10 minutes before he decided to arm up his attack, and only after Moyes made a counter substitution by bringing in Steven Naismith, while City’s best chance of the day came in that 10 minute interval, which Jan Mucha denied with a super double-save.

Choices were far from adequate on the bench and the seldom-used Scott Sinclair was the only forward available. Sinclair’s entry was predictable, though maybe a bit late, but taking off Kolo Toure for Gael Clichy in the last ten minutes did not bring any real effect to City’s attack. It was unclear what City’s formation was at the final whistle. More importantly, leaving the frustrated Edin Dzeko on the field was questionable. Dzeko had been disgusted by referee’s calls and never linked up with David Silva nor Carlos Tevez. Sometimes, it would not work by merely slotting all your available forwards into the pitch. 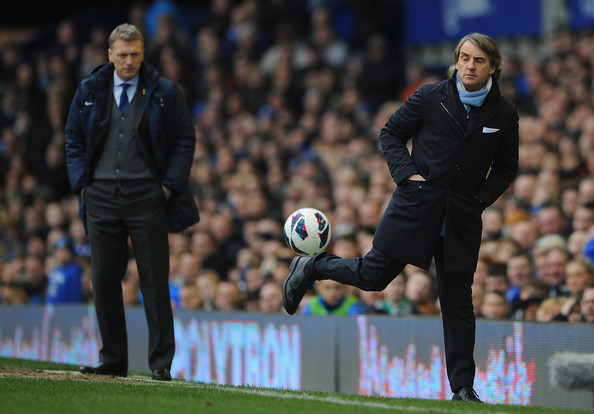 He maybe better playing rather than managing

Italian football is often about strong discipline and measured tactics. Roberto Mancini, being an attacking midfielder himself in his playing career, seems to incline in being creative in his tactical game, which has been criticised not for the first time. Being 15 points away from Manchester United, City looks destined to go through a title-less season. Debates arise again on whether Roberto Mancini is “qualified” to be Manchester City’s manager. How likely will he still at Etihad Stadium next season? It is not long until we have the answer.