Reported Spurs target, Roque Santa Cruz, has penned a new four year deal to keep him at Blackburn Rovers. So with Berbatov having one foot out of the exit door, who will be Juande Ramos’ main targets?

Diego Milito: Ramos seems to be a big fan of the Real Zaragoza hitman, and with Zaragoza being relegated, Milito could be looking for a new club.

Klaas-Jan Huntelaar: With an unbeleivable goalscoring record of 70 goals in 82 Ajax apperences, he would be a major coup for Spurs. But if reports are to be beleived, Real Madrid and Manchester United are battling it out for the flying dutchman.

David Villa: Real Madrid’s interest in Euro 2008’s top goalscorer seems to have cooled, and with 59 goals in 100 matches for Valencia, if signed, he would make a huge impression at White Hart Lane. But, the striker would cost around £32 million, and the problem would be trying to convince Villa to leave Spain. 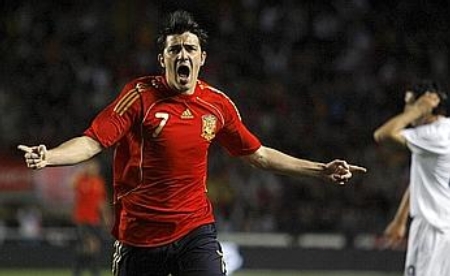 Andrei Arshavin: A big hit at Euro 2008, but I have  to ask the question: where has he been for the last 10 years? The Zenit manager has now said the striker will “probably join Tottenham”, but he would be more of a replacement for Robbie Keane, not Berbatov. At about £19 million, it would be a big gamble on the Russian.

Diego Forlan: Great goalscoring record in Spain, since leaving rainy Manchester, but he seemed to be somewhat of a flop at Old Trafford. He has a magnificent work-rate aswell. I say, get him in quick and let him convince Berbatov not to move to United.

Pablo Daniel Osvaldo:This 22-year-old Italian is almost an exact replica of Berbatov, without the laziness. He only played 13 matches for Fiorentina last season, but scored 5 goals. He could be the long term answer, and the cheapest of the lot.

Of couse, there is one more option. . . Tomas Pekhart. The Czech has scored 6 goals in 7 apperences for the Czech Republic u21’s. A product of the much admired Spurs youth academy, he is yet to be handed his first team debut. So Ramos has many options, and 24 extra hours to follow them through, as the transfer deadline is now midnight 1st September. Heard the one about Levy, Ramos and Anton Ferdinand?
Spurs-1 Sunderland-2