Heard the one about Levy, Ramos and Anton Ferdinand?

Sunderland today announced that they had completed the signing of West Ham defender Anton Ferdinand, for £8mil.

Tottenham had also been linked with the 23yr old defender. It was rumoured that Daniel Levy was a big fan of the defender, and was at loggerheads with manager Juande Ramos over whether to sign the player. West Ham didn’t recieve a bid from Tottenham for the player, so it seems like Ramos got his way.

Spurs have missed out on Ferdinand

It’s hard to imagine any Spurs fans losing sleep on not capturing Ferdinand but, one does begin to wonder, who’s in charge of transfers at Tottenham Hotspur football club. Juande Ramos or Daniel Levy?

Daniel Levy joined Tottenham in 2001 replacing former chairman Alan Sugar, who was presumaly told by Levy-“You’re Fired!” In his first few years as the club’s chairman he appointed a sucseesion of dodgy managers ( Graham, Hoddle, Pleat ) before announcing Jacques Santini would become the new Tottenham boss. It was then, things started looking up for Spurs. Santini was a big catch, leaving the France national team job to take over the reigns at White Hart Lane. Santini brought in a new, defensive mentality ( which resulted in a sucsession of 1-0 victories ) before leaving before his honeymoon period had even ended. 13 games and he was gone. The official reason for his untimely exit was-‘family problems’ but the word on the street was that he had fallen out with Tottenham’s new sporting director, Frank Arnesen.

Spurs fan’s couldn’t belive it. Their ‘new start’ was over before it had even begun. Levy acted quickly appointing Martin Jol as caretaker manager and then later annoncing he was the new permanent boss. In Jol’s first season he led the club to 9th place, two points off UEFA cup qualification, whilst playing in an attacking, fluid manner. The Spurs fan’s loved him-he had brought back the flair to White Hart Lane.

Martin Jol apparantly became disgruntled when he was not allowed to be involved in signing new players as it was considerd Frank Arnesen’s job, the sporting director. It later became apparant that Arnesen ( now at Chelsea ) was acting under the influence of Daniel Levy. A series of expensive signings followed, Darren Bent ( a bit of a flop ), KP Boateng ( a flop ) and Younes Kaboul ( the biggest flop since Rebrov ). None of the signings, reportadly, involved Martin Jol. Jol became really frustrated when the players he most wanted to sign were ignored by Arnesen and Levy. Martin Petrov was ignored ( now at Man City ), so was Lucas Podolski ( who apparantly really wanted to come to Spurs ). He began the 2007/2008 season having to do a job with players he didn’t really want.

On the 25th of October Martin Jol, the most successful manager Spurs had ever had since the start of the premier league, was gone. 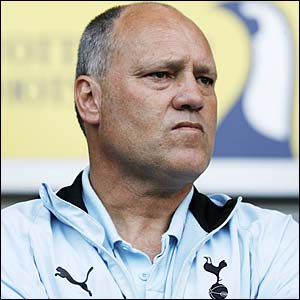 We all know who Levy bought in to replace fan’s favourite Jol. It could only have been him. The fan’s were angry at Levy for getting rid of Jol, the first manager in Levy’s reign that the fans had truely loved. The only man that would restore their faith in Levy was the man who had knocked them out of the UEFA cup. Enter Juande Ramos.

Ramos was bought to the club in a storm of controversy, Sevilla angry at Levy for ‘tapping-up’ Ramos. Nevertheless Ramos made a steady, if unspectacular, start at Spurs. Tottenham began climbing up the table, and progressed well in the cups. Jonathan Woodgate, Alan Hutton and Gilberto were brought in at Christmas and the club won the Carling cup, their first cup sice 1999. 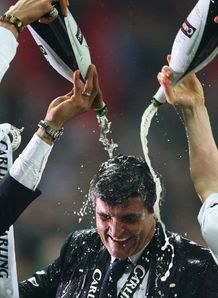 So we arrive at summer 2008. And, once again Levy began meddling. Ramos was the one who brought in Giovani and Modric, but Gomes and Bostock arrived at the club under Levy’s supervision. And then we go back to the beginning of this article, full circle. Levy hears Anton Ferdinand is up for sale and immediately tells people of his admiration for the player, despite the fact that Ramos apparantly has no intrest in the player. It now turns out Ferdinand wasn’t signed-but how long will it take for Levy to take over transfer affairs. Will Ramos remain in control? As a Tottenham fan-one can only hope so. We need Ramos and we don’t need him to be frightend off by a chairman who is a little to intrested in the comings and goings at the club.