A solid and resilient Rangers did enough to hold on to a 0-0 draw at Old Trafford and gave them an excellent start in the Champions League.

Sir Alex made 10 changes to the side that drew 3-3 at Goodison Park with Kuzcszak, Brown, Smalling, Ferdinand, Fabio, Gibson, Valencia, Rooney, Hernandez and Park all coming into the starting line-up. The visitors went for a 5-4-1 formation with Kirk Broadfoot starting after passing a late fitness test. Broadfoot and Whittaker were more inclined to push forward with Papac, Weir and Bougherra able to play in a three at the back. 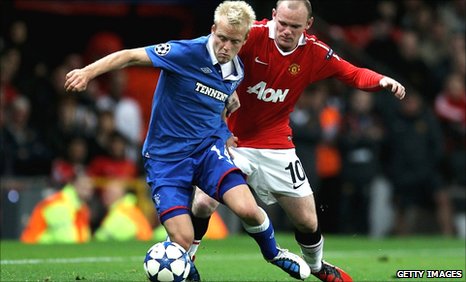 It was a proud night for the Scottish Champions who continued their excellent record in Matchday One fixtures. Manchester United rarely saw glimpses of goal with Darren Gibson resorting to long-range efforts. Mexican striker Javier Hernandez had a looping header which just went past the post and Gibson came closest in the first-half with a fine right-foot drive which left McGregor scrambling.

After a quiet first-half, the game began to open a little bit with so much space in the centre of the pitch. The Gers stuck to their disciplined game-plan and prevented United creating any clear goalscoring chances. Gibson went extremely close just after half-time with a stunning right-foot volley and had another shot which flew over the top. Antonio Valencia was stretchered off with a suspected broken ankle and was replaced by Giggs.

Kirk Broadfoot galloped forward alongside Miller in one of Rangers’ only attacking moves and the full-back had a strong claim for a penalty when he was clipped right on the edge of the box, but the referee ignored the claims. Owen and Evans were late substitutes for Sir Alex Ferguson’s men but the Gers continued to frustrate and block out United’s attacks. Miller was replaced late on by Kyle Lafferty and helped Rangers hold on to a crucial point on Matchday One.