Here are my key thoughts after yesterday’s disappointing home defeat at the hands of West Ham.

Hardly a vintage performance
Yesterday there was no shortage of effort from the Stoke side, particularly in the second half, but ultimately, we failed to create enough good chances, and squandered the ones we did make. It was a frustrating game for a fan and I hope we’ll produce better in the last three games of the season. Nothing should be taken away from West Ham though, as they looked a very good side.

It was a frustrating day for Stoke fans, players and manager alike

Stumbling across the finish line
Although we lost yesterday, I still think we have no cause for concern as far as relegation. We are currently eight points clear of the relegation zone with just nine to play for, and our position will look even stronger if the struggling teams still to play this weekend fail to win their tough looking fixtures. A few days ago, someone carried out a statistical analysis of our chances of staying up, taking into account form, odds for the remaining matches and records from past seasons, and came out with the result that even if we lose every remaining game, we still have a 93% chance of survival, and that chance will be getting greater still with other results going are way. If we gain just one more point, that probability increases to greater than 98%, so we have no reason to worry. Still, with every position up the league worth an additional £760,000, it would be good to see us push on in the final weeks.

Camara fits the picture
Since joining on loan from Wigan back in February, Henri Camara has not had a great deal of first team matches for Stoke, yesterday being just his fourth substitute appearance. I was impressed by what I saw though. He has pace that can cause defences problems and battles to an extent that belies his small frame. When he joined he said he was looking for first team football, and I’d like to see him given it in the remaining matches, though he is ineligible against Wigan is two weeks time.

Time to say goodbye to the Delapidator?
Earlier in the season, Rory Delap was causing a huge strip with his extremely effective long throws ins, creating lots of goals for us. In the last few months this has not been the case though, as we have scored direct from one just once since November. He’ll be 33 in the summer, and seems to have lost the stamina he once had, and teams are getting better at defending his seemingly shortening throws, so perhaps it’s time we phased out his involvement. If I was Tony Pulis, I’d definitely be looking to bring in at least one new centre midfielder in the summer, with Modeste M’bami and Guinare N’daw, currently playing for Marseille and Nantes, being likely targets. Delap also suffers from indiscipline, having again had a petty dig at an opponent yesterday. I met the referee Peter Walton a few months back, and he told me which pocket he keeps each of his cards in, so I was very relieved to see him reaching for the yellow one only.

The referee…again
At the risk of sounding like someone who constantly moans at officials, I’ll say once again that I thought our referee, this time Peter Walton, had a poor game. He seemed loathe to give any free-kicks to Stoke for defenders climbing on our forwards, or West Ham’s forwards backing into our defenders, our physical reputation perhaps stopping him from giving us these technical fouls. The worst piece of refereeing from him though was in my opinion his decision to disallow West Ham’s “goal” in the first half. Having just ruled one out for Stoke, it smacked of “let’s even it up refereeing” and though it favoured us, was not good to see.

The opposition
I was very impressed with West Ham. They were up for the game, something a lot of visitors to Stoke have not been this season, and should be commended for their attacking play throughout. Their defence was particularly good, dealing very well with our aerial threat. I was impressed with young centre back James Tomkins again, after seeing him play very well against us whilst on loan at Derby earlier this season. At just twenty, he’s definitely one to watch for the future. Gianfranco Zola has done an excellent job with the Hammers, turning them from a troubled club on and off the field to genuine European contenders. Well done to him.

Key battles evaluation
In my preview of the game, I selected the clashes between Stoke’s Ricardo Fuller and Tomkins, Stoke’s Liam Lawrence and West Ham’s Herita Ilunga and our Stephen Kelly and the Hammers’ Luis Boa Morte as the most important. Tomkins definitely got the better of the Stoke forwards, while Congolese left-back Ilunga kept Lawrence relatively quiet. Kelly didn’t play, so the overall outcome here is 2-0 to West Ham.

Thomas Sorensen (gk): The Dane had a reasonable game, commanding his area quite well and making the saves he did comfortably. He cannot really be blamed for conceding the goal, which was an extremely well struck free-kick. 6

Andy Wilkinson (rb): I was enthused when I heard that Wilko was fit to play, and he didn’t disappoint with another strong, classy performance. He should particularly be praised for a fine piece of defending when West Ham had a man advantage on the break late in the first half. 8

Ryan Shawcross (cb): Shawcross had a pretty good game, and was rarely troubled in the air by West Ham’s forwards. 7

Abdoulaye Faye (cb): Who else but Abdoulayecould slip, losing the ball in a very dangerous position, win it back by making a tackle with his chest and then sprint out of defence, skinning three opposition players on the way. The man is an absolute hero and on the whole had another assured game. 7

Danny Pugh (lb): Pugh is not a natural left-back and was often caught out by the pace of West Ham’s wingers. Unfortunately, it looks likely that he will retain the position for the final three games though, as first-choice Danny Higginbotham is out for the season. 5

Liam Lawrence (rm): Lawrence had a game that was neither here nor there. At times he looked dangerous, but he never really imposed himself on the match. 6

Glenn Whelan (cm): Whelan tends to fade in and out of matches, pulling all the strings for ten minutes then doing nothing for half an hour. This was the case yesterday as he put in an average showing. 6

Rory Delap (cm): Much like Whelan, he did not have a huge effect on the game, particularly as West Ham dealt well with his numerous long throw-ins. 6

Matthew Etherington (lm): I wonder if Etherington is not just a little intimidated coming up against big, strong full-backs, as for the second home game in a row he struggled against one in Lucas Neill. He had a few good moments against his former clubs, but on the whole was quiet. 6

Ricardo Fuller (cf): For the first time in a while Fuller had the right attitude yesterday, but in truth struggled to get much change from West Ham. 6

Henri Camara (cf): Yesterday was the best we’ve seen of Camara yet as I’ve said above. More of the same from him would be welcome for the remainder of the season. 7

Seyi Olofinjana (cm): After losing his place in the side, the Nigerian’s contribution has been limited to cameos like this in the last few months. He played well in his twenty minutes on the pitch though, retaining and passing the ball well and adding to our aerial threat. 7

Ibrahima Sonko (cb): Sonko was not really on the pitch long enough to make an impression either way, coming on with just two minutes of normal time remaining. It’s not often that you hear of a manager putting on a fresh pair of arms, but his long throws, which now rival Delap’s did look dangerous. N/A

My man of the match: Andy Wilkinson 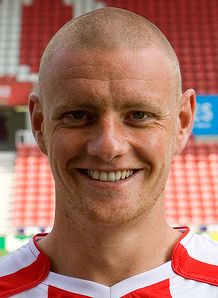