It will be three months tomorrow since Stoke’s first ever Premier league victory. Mamady Sidibe header a lead winner in a 3-2 success for Stoke and he repeated the feat today, heading home in the 84th minute to give the Potters all three points. The game though, was nothing like as entertaining as the end-to-end encounter with Villa back in August, Sidibe’s goal today being one of only a few talking points in a game that otherwise failed to catch the imagination.

Stoke boss Tony Pulis made two changes to the side that lost 5-0 at Manchester United a week ago, bringing in Dave Kitson for the suspended Ricardo Fuller and Tom Soares for Seyi Olofinjana, who was deemed only fit enough for the bench after suffering a knock at Old Trafford. There was no place for former Stoke favourite Carl Hoefkens in the Baggies eighteen, while Stoke’s summer target, the blunder plagued Scott Carson, started in goal for the visitors.

The game started in scrappy manner, neither side being able to settle into their rhythm until Stoke won a corner in the eighth minute. Soares whipped in a dangerous ball, Sidibe climbing highest to meet it with his head, only for his seemingly on target effort to strike team-mate Danny Higginbotham and bounce away from the danger zone. Shortly after, Stoke won a throw in well into the West Brom half. Unsurprisingly, Rory Delap threw it long, and in the ensuing penalty area melee, Kitson sustained an injury, remaining on the ground long after play had resumed at the other end of the field. The striker was, sadly, on the day that was supposed to provide his chance to prove himself to the Stoke support, unable to continue, being replaced by Richard Cresswell less than ten minutes into the match.

A rare moment of class in a half, and a match that lacked quality came just two minutes later. Sidibe controlled the ball twenty-five yards out before hitting a powerful half volley that pulled a fine diving save from Carson. That was as good as it got in the first period, Stoke’s only other effort on target being a weak Sidibe header following a trademark Rory Delap long throw that did absolutely nothing to trouble Carson, who was able to collect it with ease. Albion’s best moment of the half came around the half hour mark, powerful striker Ishmael Miller, who was a handfull all match, dipping a volley onto the roof of Thomas Sorensen’s net from the edge of the penalty area.

The action did pick up in the second half, Soares having a presentable chance to give Stoke the lead on 51 minutes when the ball fell to him on the edge of the Baggies’ penalty area following some good interplay between Cresswell and Higginbotham. Striking the ball with his weaker left foot though, the former Crystal Palace man was only able to force a routine save out of Carson, the ball travelling low towards the centre of the goal.

Minutes later, the 22 year old had another chance to open his Stoke account, meeting Sidibe’s curling cross from the left flank. His glancing header, unfortunately, flew straight into the arms of Carson. West Brom then had their best spell of the game, the lively Miller’s effort curling wide after taking a deflection off Abdoulaye Faye, before Slovenian international Robert Koren could only guide his header past Sorensen’s left hand post after the Danish ‘keeper failed to deal with Baggies’ captain Jonathan Greening’s in-swinging corner. 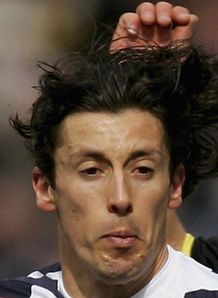 The spell of away pressure prompted Pulis into his second substitution of the afternoon, swapping one deadline day buy for another, Michael Tonge replacing Soares on the right wing. Tonge soon found himself in the thick of the action, picking up the ball wide on the left flank and curling an effort at goal from an unlikely angle. The shot was though too much for Carson to handle, the ‘keeper claiming the ball only at the second attempt.

Tonge then drove a good looking cross into the West Brom penalty area, Sidibe looking likely to make contact with the ball. Sidibe was muscled away by fellow African, West Brom centre half Abdoulaye Meite. Many Stoke fans, myself included, felt aggrieved that a penalty was not awarded, as Meite seemed to make heavy contact with Sidibe, denying him the chance to head the ball goalwards.

Just over five minutes later, West Bromwere presented with by far the best chance of the game to that point, courtesy of Stoke skipper Andy Griffin. Griffin, who otherwise produced a good performance, was far too slow to get rid of the ball in the right back position and had it nicked away from him the Baggies’ Portugeuese midfielder Filipe Teixeira. The Albion man cut inside and had only Sorensen to beat. He was woefully unable to find the target though, slicing wide to Sorensen’s left when a little more finesse was required. With Miller also in a good position, and likely to have scored a tap-in if Teixeira had found the right ball, it really was a let off for Stoke.

At this point, the game looked like it was heading for a damp squib of a 0-0 draw, and if there was to be a goal in it, it was surely to be the winner. The goal did come, and indeed it was the winner, Tonge playing a fine ball to Higginbotham on the left wing, before Higginbotham lofted a perfect ball to Sidibe at the back post, who was able to climb highest a loop his header into the far corner of Carson’s net, to the delight of the 23,000 Stoke fans present.

West Brom were unable to conjure up much by the way of clear chances in the remaining five minutes of normal time, or the five minutes of added time which were played largely as a result of a back injury to Ryan Shawcross, a sour note on a good day for Stoke.

The final whistle came from referee Lee Mason, who many Stoke fans felt should have given more the way of the home side, but in truth we did not need any decisions to go our way, as one goal, crafted from a quality cross and a quality header was enough to seal all three points in a game that was defined by an abject lack of quality play. 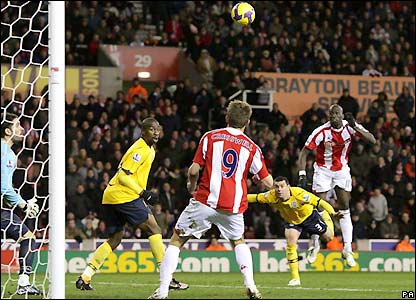