Stoke City signed off our home campaign for 2008/09 in some style this afternoon, comfortably defeating an underwhelming Wigan side at the windswept Britannia Stadium. The first half was defined by a lack of excitement, with both sides struggling with the conditions, but the Potters came alive in the second and sealed the victory with two goals inside seven minutes from strike partners Ricardo Fuller and James Beattie midway through the half. The win lifts Stoke above Wigan into eleventh place on forty-five points, and means that whatever happens on the final day of the season, when we go to Arsenal, we can finish no higher than tenth, and no lower than twelfth.

The two sides locked horns at the Britannia Stadium, Stoke in the famous red and white and Wigan looking like the victims of an explosion in a highlighter factory
Stoke manager Tony Pulis fielded an unchanged side from the one that beat Hull a week ago to secure our Premier League status, with Ryan Shawcross and Andy Wilkinson playing in unfamiliar roles at right and left-back respectively, while Leon Cort continued at centre-back alongside Abdoulaye Faye, who took a clean sweep of nine player of the season awards on the pitch before kick-off. Contrary to the expectations of many Stoke fans, there was no place on the bench for misfit forward Dave Kitson, who, in the words of Pulis’s assistant Dave Kemp, has been at Reading until very recently so it wouldn’t have been right to play him.
South Korean international Cho Won-Hee was a surprise inclusion to the visitors’ starting eleven, making his Latics debut as he shook off a calf injury to play as part of a five man midfield, Colombian striker Hugo Rodallega leading the Wigan line alone.
With high hopes in the stadium for an open, exciting game, as both sides could relax at the end of the season, the Potters survived an early scare with Wigan carving out a sight of goal inside the first minute. French winger Charles N’Zogbia was only able to fire straight at Thomas Sorensen in the Stoke goal from a tight angle. Despite this promising start, the first half failed to ever get going really, as the string wind hindered the attacking efforts of both sides, continually stalling Stoke’s direct passes and on several occasions taking Wigan’s balls forward out of play.

Ryan Shawcross and Paul Scharner battled aerially during a dull first half
In fact, there were just two further efforts on target in the half, and neither of those ever really looked like finding the net, Stoke’s James Beattie forcing Wigan’s Ghanian ‘keeper Richard Kingston only to stop to gather his low effort, before Cho brought a decent tipped save from Sorensen with a well-struck long range drive.
Stoke did have the ball in the net after half an hour though, as a typically lengthy Rory Delap throw in found its way into Kingson’s goal, via a slight touch from Kinsgon, meaning the goal would have stood, had referee Lee Probert not spotted a foul by Stoke skipper Abdoulaye Faye on the goalkeeper. Normally I moan that goalkeepers get far too much protection, but as Probert had an otherwise exemplary game, and as we went on to win, I’ll give him the benefit of the doubt here.
The home side’s best moment of the half came as it drew to its conclusion, Beattie doing extremely well to get behind Wigan’s Honduran left-back Maynor Figueroa before cutting the ball back towards Fuller and Liam Lawrence in the centre. With Lawrence probably in the best position to strike for goal, Fuller, ever selfish, stuck out his foot deflecting the ball away from Lawrence and Matthew Etherington, who had made a late run to the far post, a moment of sloppy play that summed up the half. In a season which few Stoke fans want to see end, there were none complaining when Probert blew the whistle to bring an end to the first half today.

Lawrence is frustrated by Figueroa
Stoke approached the second half with far more attacking impetus and verve however, and soon went close through Danny Pugh, who had come on at half time for Cort, allowing Wlkinson the freedom to get forward down his natural right flank. The former Manchester United man hit a powerful volley, which flew narrowly over Kingson’s bar, his pained expression showing how close it was. Perhaps shooting the other way the wind would have taken the ball into the net, as it was, it sailed over.
The Latics then threatened themselves for perhaps the only time in the half, Figueroa surging gazelle-like from his left-back position to the edge of the Stoke box, from where he hit a crushing low effort, which fortunately arrowed inches wide of Sorensen’s right post, keeping the Dane’s deserved clean sheet in tact.
The opening goal eventually came for Stoke in the 69th minute of a game where for once we enjoyed the lion’s share of possession, Fuller latching onto Lawrence’s knock forward, before evading three Wigan defences, turning down three presentable chances to shoot in favour of working the ball from foot to foot, seeing off a lunging tackle from Figueroa and eventually expertly sending the ball high past Kingson into the goal infront of the Boothen End, which, having waited all game for something to celebrate on the jubilant day, erupted. Some would call in commendable persistence from the Jamaican, others a foolish inability to accept three good sights of goal. Once again, as I’m in a good mood, I’ll say it was the first. It was his tenth strike of the season, an added positive for him, as to get into double figures in a side that has spent a lot of the season in the relegation zone is no mean feat.

Fuller leaves Figueroa on the ground to score his tenth of the season.
It was very nearly two moments later, as, Stoke having won a corner, a bizarre sequence of events played out. Lawrence fired the ball in low, a Wigan defender hacked it towards his own goal, Kingson managed to get some part of himself behind it, and it ricocheted off the post and away. That’s the best I saw the incident anyway, I’m sorry if it’s inaccurate, as at just that moment, two of the people sitting directly in front of me were ont he verge of having a fight, one old, one young, the old, having clearly been aggravated by the young’s foul-mouthed antics and refusal to sit down all season, gave him a completely unexpected hard push in the back. The young, having come perilously close to flying down the Seddon Stand, rounded on the old, intent on vengeance, before stopping in his tracks when he saw his assailants advancing years, decided he’d have to settle for in my opinion justified verbal abuse, before returning to his primary aim of blocking everyone’s view.
As it was, all bad blood was forgotten, or at least temporarily shelved away, as Beattie made it two minutes later. Glenn Whelan’s clever ball set Etherington free withthe ball bouncing in the penalty box. With Kingson haring out, the former West Ham winger, who I often feel lacks that bit of commitment, could easily have decided to pull out of the challenge, but instead charged into it, nicking the ball away from the ‘keeper towards the back post, where Beattie, the instinctive goalscorer he is, was waiting and gratefully headed the ball home, to score his nineteenth of the season (seventh for Stoke), and put the game beyond Wigan. 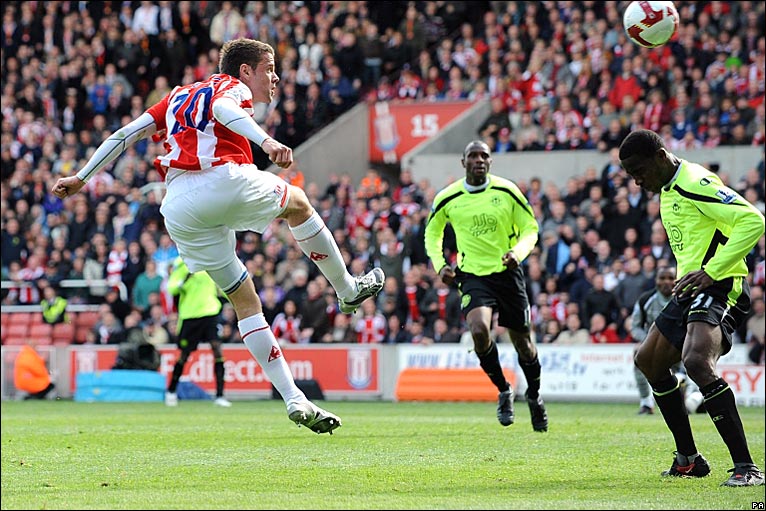 Beattie nods it home, while Figueroa seems more concerned in examining his groin region than defending his team’s goal
It would have been good to see us push on to score more, but this was not the case, as we took our foot off the gas in the final ten minutes, content to soak up Wigan’s blunted attacking advances. Whelan sent a free-kick over the bar in the dying seconds of the game, but in truth, two goals were more than enough to overcome Wigan and sent the Stoke fans home happy once again, with almost all of the 24,000 Stokies in the ground staying well after the final whistle to joyfully celebrate our ultimately comfortable survival while the heroic players and their either excitable or bemused children took the applause on their lap of honour.
The win was a fitting end to an excellent season at the Britannia Stadium, with 35 of our 45 points amassed to date having been won at home. I’d love us to beat Arsenal on the last day, and hope Manchester City slip up so we can sneak into the top half to emulate Wigan’s finish from three seasons ago, but really I’m very content with what we have achieved this season. It seems unlikely that we’ll get anything from Arsenal, and if we don’t, 45 points still reflects a fantastic achievement. Then again, perhaps we’ll surprise everyone and beat the Gunners, we’ve already done it once this season. With this Stoke squad you really do never know.
Stoke Side: (4:4:2)
Sorensen
Shawcross  Cort  Abdoulaye Faye  Wilkinson
Lawrence  Whelan  Delap  Etherington
Beattie  Fuller
Substitutions: Pugh for Cort (46), Diao for Etherington (76), Cresswell for Beattie (86)
Unused Substitutes: Simonsen, Kelly, Olofinjana, Tonge
Attendance: 25,641
Related TopicsStoke City Wigan Athletic

Cardiff To Stoke: Ledley’s Yours For £6 Million; But Do We Really Want Him?
Stoke City 2-0 Wigan Athletic – My View