This Saturday sees Sunderland taking on Stoke at the Britannia Stadium. Both teams have wins under their belt as they head into the fourth match of their Barclays Premier League season. Sunderland sits in sixth postion after wins against Bolton and Blackburn. For the Potters they are in a decent ninth postion with one win coming against Burnley. Sunderland striker’s Kenwyne Jones and Darren Bent have been banging in the goals; however Stoke’s new signing Tuncay could well make his debut. This could be a good match and defiantly one to enjoy for Sunderland and Stoke fans.

Stoke City could well struggle this season, however they have a win under their belt which will build some confidence. However it seems they could well shed quite a few goals against tough opposititon, Liverpool has already played Stoke at Anfield and the home side came out on top 4-0. In midweek Stoke were taken into extra time by Leyton Orient in the Carling Cup, however Stoke were able to win 1-0 thanks to a goal from Dave Kitson. Tony Pulis the manager of Stoke seems to be doing a good job at the Midlands club. He was able to get Stoke City promoted two seasons ago, and also successfully kept them up in 08/09. This season it will be another difficult task, however Stoke are capable of staying up.

The Strikers, James Beattie, Ricardo Fuller and Tuncay are capable of scoring plenty of goals; however the defence is the worry. With Ryan Shawcross being linked with a move away from Stoke, it could well leave a big hole in the defence. Ryan Shotton though is an upcoming right-back who was on loan at Tranmere last season, he is an impressive youngster and could well fit right into the right-back position this season. As for new signing Dean Whitehead, he could well feature against his former club Sunderland this weekend. If Whitehead starts for Stoke he could either partner Liam Lawrence or Glenn Whelan in the Centre of Midfield. A positive point for Stoke is the throwing of Rory Delap, last season a lot of goals came from his throws and with Beattie, Fuller and the defenders up for the throws they could well cause Sunderland problems. However for the team news Michael Tonge could be in contention for Stoke, however Mamady Sidibe could well miss out.

Sunderland has started well in the Premier League this season, and the Black Cats already have two wins coming against Lancashire clubs. Sunderland picked up a win against Bolton on the first day of the season. Sunderland then recorded their second win of the season against Blackburn thanks to two goals from Kenwyne Jones. Sunderland manager Steve Bruce could well have a selection headache for the upcoming match against Stoke. With an impressive 4-1 victory over Norwich in the Carling Cup some of the fringe player’s could get their chance this weekend at the Britannia Stadium. Frazier Campbell, Teemu Tainio and Jordan Henderson all could be pushing for starts against Stoke on Saturday. Sunderland however has sold midfielders Carlos Edwards and Grant Leadbitter to Ipswich, and Nyron Nosworthy and Daryl Murphy could also be going aswell. Steve Bruce though has stated that he will bring in more players before the transfer window closes. There are rumours that Michael Turner and John Mensah could be making a move to the Stadium of Light.

Sunderland strikers Darren Bent and Kenwyne Jones could well cause the Stoke defence problems this weekend. Both of the strikers have two goals between them and also not forgetting Frazier Campbell and David Healy who could well start on the bench for Sunderland on Saturday. The Black Cats look impressive with Bruce in charge and a top 10 finish could be imminent. The only worry for the Black Cats could be the defence, even though they started well against Chelsea they ended up losing 3-1. That’s why Steve Bruce needs to bring in a couple of defenders as Anton Ferdinand, Paulo Da Silva and Danny Collins aren’t enough for the Centre of Defence.

Kenwyne Jones could well be the key man for Sunderland this Saturday. The striker comes into the game with two goals next to his name, he also looks on form with Darren Bent alongside him. Jones has power and pace and an eye for goal, Jones could well cause Shawcross and Huth problems this weekend. 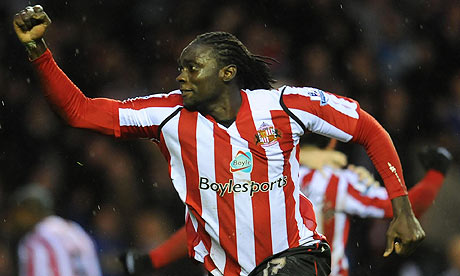