Tabarez Unsure of Starting XI Coming Into Group A

Uruguay may have required a tight play-off against Costa Rica to qualify for this summer’s World Cup, but they still have what is regarded by many as their best team since the turn of the century. Attacking talent, midfield flair and steel and an inspirational leader will be the linchpins of Uruguay’s assault on Group A.

As for the number one jersey, Lazio’s Fernando Muslera will be the favourite to be in possession during the tournament, but Oscar Tabarez will have a degree of uncertainty about the position, as none of the four goalkeepers used in qualifying completely made the spot their own. However, Muslera is a more than competent goalkeeper, and the other two will provide good cover.

With Tabarez favoring a 3-5-2 formation, a resilient back three is a pivotal part of the game plan. Captain Diego Lugano will be the first name on the team sheet, and is likely to be lining up alongside Andres Scotti and Diego Godin. So Uruguay will most likely go into their first game against France with a strong defense, but if one of those players gets injured, the back line could be significantly weakened.

A little further up the pitch, the two Pereira’s are likely to start as wingbacks, and will relish the opportunity to enjoy a more attacking role than they are given for their club sides. Gargano and Perez will probably be given the jobs of protecting a potentially exposed defense, particularly against France. However, when La Celeste face South Africa and Mexico, Oscar Tabarez may chose to only play with one holding midfielder.

Especially if Tabarez opts to deploy two defensive minded players in the middle of the park, there will be one player in that midfield who is given the freedom to link midfield and attack, and could be the key to unlocking an opposition defense. This is, however, one of the most uncertain positions for the manager, as various players have been deployed in this position throughout Uruguay’s qualifying campaign. Many fans will be calling for Nicolas Lodeiro’s inclusion after his impressive displays for the Under 20’s side, although he only has three senior caps to his name. Ignacio Gonzalez is another candidate for this role, but has seen his club career halted, as he is yet to make his debut for Valencia, whom he joined in 2008. The 28-year-old also spent a season on loan at Newcastle United, where again he failed to break into the first team. So both players are relatively untried and untested at the highest level. 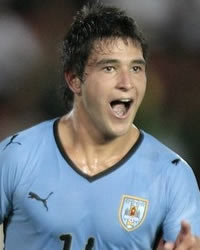 There is also one notable absentee from the midfield. Porto’s Cristian Rodriguez has a two game ban to serve after being sent off against Argentina in qualifying. And Tabarez has decided to omit him from the squad, holding the opinion that it was not worth taking a player who could not play in their first two games. A signal of his expectations from the tournament, perhaps?

This is certainly the strongest and most settled area of the pitch for La Celeste. With 35 goals from 33 league games last season, Luis Suarez of Ajax has earned the right to partner Diego Forlan up front. The pair have won over 100 caps between them, but haven’t quite been able to replicate their club form on the international stage. Uruguay also have strength in depth. Sebastian Abreu has done himself no harm, with a brace in the recent friendly against Israel, and Edinson Cavani has been a major part of Palermo’s side.

This could be how they line up in their opening match against France on Friday.