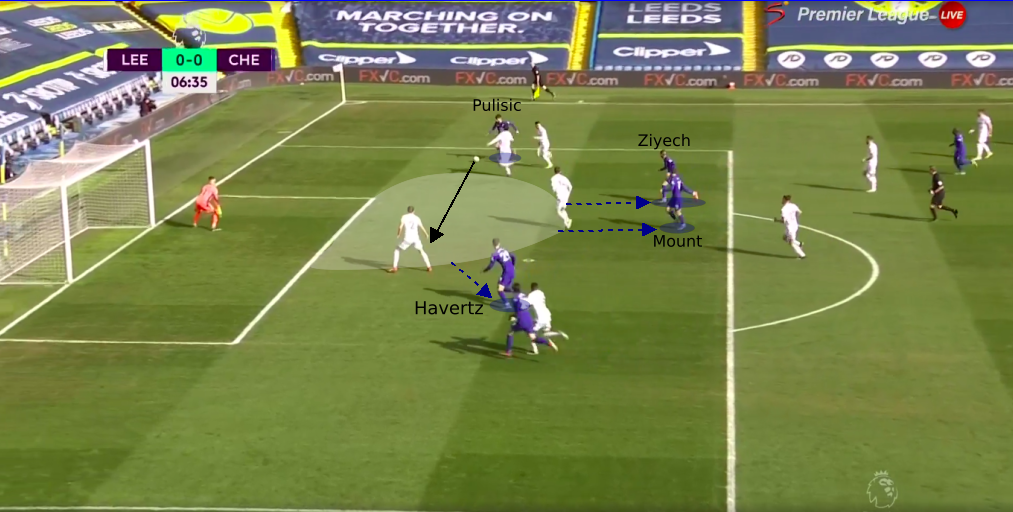 Only Leeds United stood between Thomas Tuchel and Chelsea history. The German tactician was just one match away from equalling a club-record undefeated start spanning 12 matches, while he had only dropped points twice in the Premier League. Their opponents had lost four of their last five, so the task was surely not easy for Leeds United.

Tuchel experimented with a back-four for the first time at Chelsea (from kick-off; he had switched to one in the FA Cup against Barnsley), and as the scoreline suggests, he failed. From a tactical standpoint, though, the match was quite intriguing, so let’s take a look at Chelsea’s new system and why it failed.

Chelsea lined up in a 4-2-3-1 on paper, but as ever, it was quite a changeable formation.

César Azpilicueta moved to right-back as Andreas Christensen joined Antonio Rüdiger in front of Eduoard Mendy, meaning that Ben Chilwell was the only pure full-back. N’Golo Kanté joined Jorginho in holding midfield as Tuchel gave Leeds United a fair amount of respect, while a fairly fluid front-four was comprised of Christian Pulisic and Mason Mount on either flank and Hakim Ziyech behind Kai Havertz.

Chelsea maintained their 3-1 front-four while pressing, as you can see here.

They transitioned into a sort of a 4-4-2 in defence as the wingers dropped back, meaning that they were protecting their goal with four defenders for the first time under Tuchel in the Premier League.

The formation in possession remained unchanged from the old system, as Chelsea kept a 3-2-5 with Chilwell pushing up on the left and Azpilicueta staying back as an auxiliary right-back. Mount and Ziyech slightly dropped off the front line on either side of Havertz to help in progressing the ball – mirroring the 3-2-2-3 build-up.

Problems on the right wing

The usage of Azpilicueta as an auxiliary full-back proved to be quite a problem for Chelsea. This meant that Pulisic was left all alone on the right wing so he had to drop deep quite often, and in any case, he alone could neither stretch the Leeds defence nor pose a threat on the flank.

The issue is quite evident here – Pulisic has an impossible amount of space to cover as Azpilicueta stays in a back-three.

The American international did not have a particularly great match himself, as he was outmatched by Ezgjan Alioski in their head-to-head. The Macedonian left-back had to solely focus on him in one-on-ones due to the lack of an overlapping full-back, and he scored a resounding victory in that duel as Pulisic failed to dribble past him (or any other opponent) even once while losing the ball in such a scenario four times.

In fact, arguably the best chance that Chelsea created came from a rare foray forward from Azpilicueta, which proves that they were perhaps better off with using him as a normal full-back.

The problem on the right wing was not the only contributing factor to Chelsea’s failure at the sharp end; there was another, more directly impactful issue.

Tuchel made some interesting selections up front as well, as Ziyech was used as a number 10 and Kai Havertz spearheaded the attack. That did not quite work, though, as Chelsea never really seemed to trouble the Leeds United defence.

The hosts’ high press and man-marking in defence often forced Chelsea to go long, and this is where the selection of Havertz hurt Chelsea.

He would have to chase such lost causes all alone against the Leeds centre-back pairing, as the rest of his attacking teammates would drop deep to help progress the ball. Since hold-up play is not one of the German forward’s strengths as he is not a pure striker, he probably did not enjoy such situations.

The problem is quite evident in this instance. As Pulisic prepared to drill a low cross in, there was no one attacking the danger area. Both Ziyech and Mount are too close to the edge of the box, while Havertz has drifted too far out to the left to cause any problems.

The selection of Ziyech (a winger by trade) as the attacking midfielder was also a poor choice. Not only did he fail to impact the match from the middle of the park as he made just 21 passes (the lowest tally among Chelsea’s starters), he was downright poor in a foreign position.

This instance epitomises Ziyech’s failings. Any natural attacking midfielder would be making a run into the box to attack a potential cross from Havertz in this scenario, but the Moroccan international is just standing pointlessly outside the box.

The fact that Tuchel used his three substitutions to replace the trio behind Havertz is a clear indication that he too conceded that his attacking selections could have been better, and that is perhaps what ended up costing Chelsea the match.

If the scoreline isn’t proof enough, Tuchel’s two changes in the 68th minute which saw Timo Werner and Reece James replace Pulisic and Ziyech to revert to a 3-4-3 are a clear indication that the 4-2-3-1 did not work. This failed experiment might not be the worst thing in the world as Chelsea have a significantly more important Champions League match in midweek.

However, given the nature of this Premier League season, Chelsea must be careful to not slip further. With this draw, Chelsea could drop all the way down to 7th if West Ham, Everton and Tottenham Hotspur win all of their games in hand, so they cannot afford to lose further ground.

This was arguably Tuchel’s first major tactical mistake in London, and although he is yet to lose, the ex-PSG manager must be careful to learn from this and not repeat it without amendments.