Tactical Analysis: Manchester United’s problems against AC Milan and how they were solved by Diallo 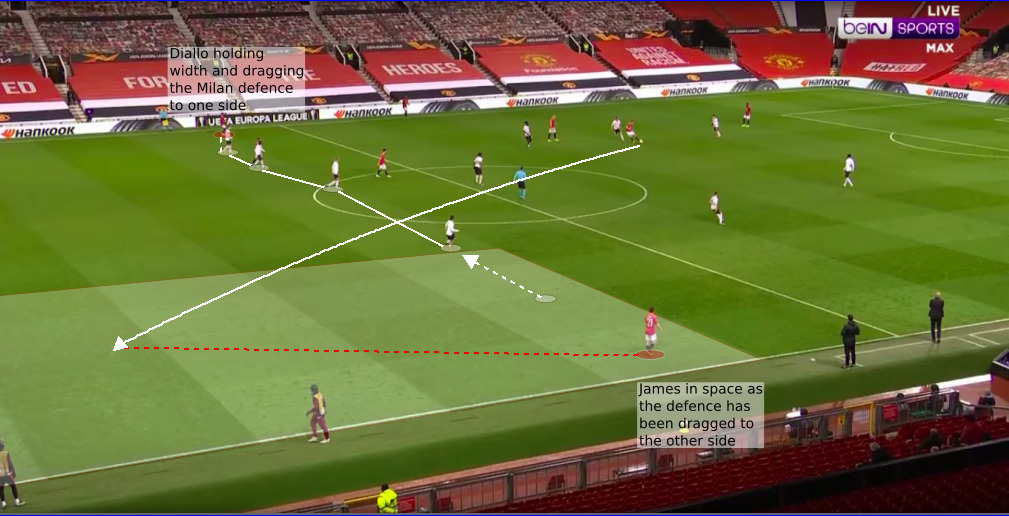 Fresh after their derby success at the Etihad, Manchester United hosted AC Milan in a UEFA Europa League Round of 16 tie. While the FA Cup was still in reach, this was, perhaps, the Red Devils’ best chance of a trophy this season.

Milan had led their domestic league for a much longer period than their opponents, but they too had been usurped by their neighbours, albeit by a smaller margin. But, for the Rossoneri as well, this was their best shot at silverware.

The first leg proved to be the drama-packed battle it was built up to be, as the visitors had a stunning early opener chalked off by VAR, United took the lead in the second half, and finally, Milan equalised in the dying stages of the match to get a crucial away goal.

A draw was the least the Italians deserved – they were by far the better side in the first half and did not look out of shape for the second 45 either in spite of a multitude of injuries to key players. In this analysis, though, our focus will be on Manchester United and their problems in this match.

Manchester United started the match in a 4-2-3-1 with Anthony Martial up front and Mason Greenwood, Bruno Fernandes and Daniel James behind him, but this did not quite work.

There were a number of problems here. First of all, Martial picked up a knock on his hip early on in the match, which is why he had a very poor day at the office. More importantly, though, there was a tactical issue in the 3 behind him.

Greenwood did not hug the touchline as James did in possession, and this had a number of negative repercussions. First of all, it meant that Milan’s back line would not be stretched while dealing with James since they did not have to worry about the opposite flank and could therefore shift across to their right. Secondly, Greenwood’s narrow position denied Fernandes the usual freedom he had as he was no longer able to drift to his right, meaning that he had to drop deep often. But, all of this could be excused if Greenwood was drifting inside to create space for a powerful attack-minded full-back, but Aaron Wan-Bissaka surely is not the first name that comes to mind when you hear this phrase.

Because of this, Manchester United were majorly restricted in the final third, and they never seemed to cause any problems to Milan’s defence in the first half. Their back line, however, was not so protected, and these problems stemmed from Greenwood’s position as well.

Here too, he stayed infield unlike James.

Therefore, it was his job to press Fikayo Tomori (the left centre-back) if he received the ball.

This usually resulted in the Chelsea loanee playing the ball out wide to Diogo Dalot (the left-back), who was closed down by Wan-Bissaka.

The right-back pushing so far up the pitch naturally left a lot of space in behind, but luckily for the Red Devils, their opponents failed to exploit it as Rade Krunić did not look lively at all.

Milan did use this to hurt United indirectly, though, and they had an interesting means of doing so.

The Rossoneri essentially converted goal-kicks into a set-piece. The keeper would play a one-two with Simon Kjær (as Tomori would be closed down by Greenwood), drawing an isolated press from Martial. He would feed the ball into the right centre-back, who would have a fair amount of time.

He used that time to look up and pick out a long passing option – using United’s high defensive line and, in particular, Wan-Bissaka’s advanced position to directly attack the home goal.

So, although Manchester United escaped without conceding in the first half, it was obvious that Ole Gunnar Solskjær would have to make some changes at half-time.

With Martial’s hip injury limiting his mobility and performance, Solskjær decided to withdraw him at half-time, sending Amad Diallo on in his place. This substitution resulted in a couple of positional changes too.

Greenwood moved into a central position, with Diallo taking up his place on the right.

This changed worked a treat, as the young Ivorian winger’s dynamism proved to be the key to unlock the Milan defence.

Unlike Greenwood, he stayed wide on the right on many occasions, stretching the opposition defence and creating space on at least one flank.

Crucially, though, he had a good understanding with the rest of his teammates, so he drifted inside at times too. That is precisely how he opened the scoring – Diallo saw Greenwood dropping off the back line and dragging a defender with him, so he decided to make a run behind and ended up profiting from Fernandes’ pass.

The goal-kicks conundrum ended up solving itself as Milan only had one in the second half, while the long ball threat was nullified as Wan-Bissaka no longer pushed up to press Dalot.

The job fell to Diallo instead, meaning that he did not press Tomori as Greenwood had done in the first half. Of course, the trade-off here was that United would find winning the ball back a bit harder, but with a lead to protect, it was the logical option.

The introduction of Amad Diallo turned the match in Manchester United’s favour, as his dynamism and pace proved to be too much for the Milan defenders to live with. His work off the ball was good too, and it served to restrict the visitors’ attacking threat.

On another day, United would have comfortably held on to the one-goal lead in the last 15 minutes, but Solskjær ended up shooting his side in the foot when he sent Luke Shaw, Brandon Williams and Fred on for James, Wan-Bissaka and Fernandes in the 74th minute. These changes were very negative, as three regulation left-backs in red shared the same pitch, but more importantly, it left United with just Diallo and Greenwood to rely on in attack.

Fred as a number 10 absolutely did not work – he gave away possession five times and committed two fouls with just 11 touches (while failing to win the ball back even once), Alex Telles had to play as a left winger to accommodate Shaw at left-back, and Williams at right-back ended up conceding the corner which led to the equaliser.

As aforementioned, a draw was the very least that Milan deserved for their performance. They put the ball in the back of the net twice in the first 12 minutes, but offside and a marginal handball deprived them of a goal. United were clearly played off the park by a depleted Rossoneri side, but Diallo’s introduction turned the match on its head.

However, in the end, Solskjær undid all the good that he had done at half-time (and perhaps even added a little more thanks to the away goals rule) with some very questionable changes to preserve a lead in a two-legged tie which was obviously not going to be settled in Manchester, and he could well be regretting those decisions in Milan.

For now, though, the battle between the red sides of Manchester and Milan remains a finely poised encounter, with more twists guaranteed in the second leg.