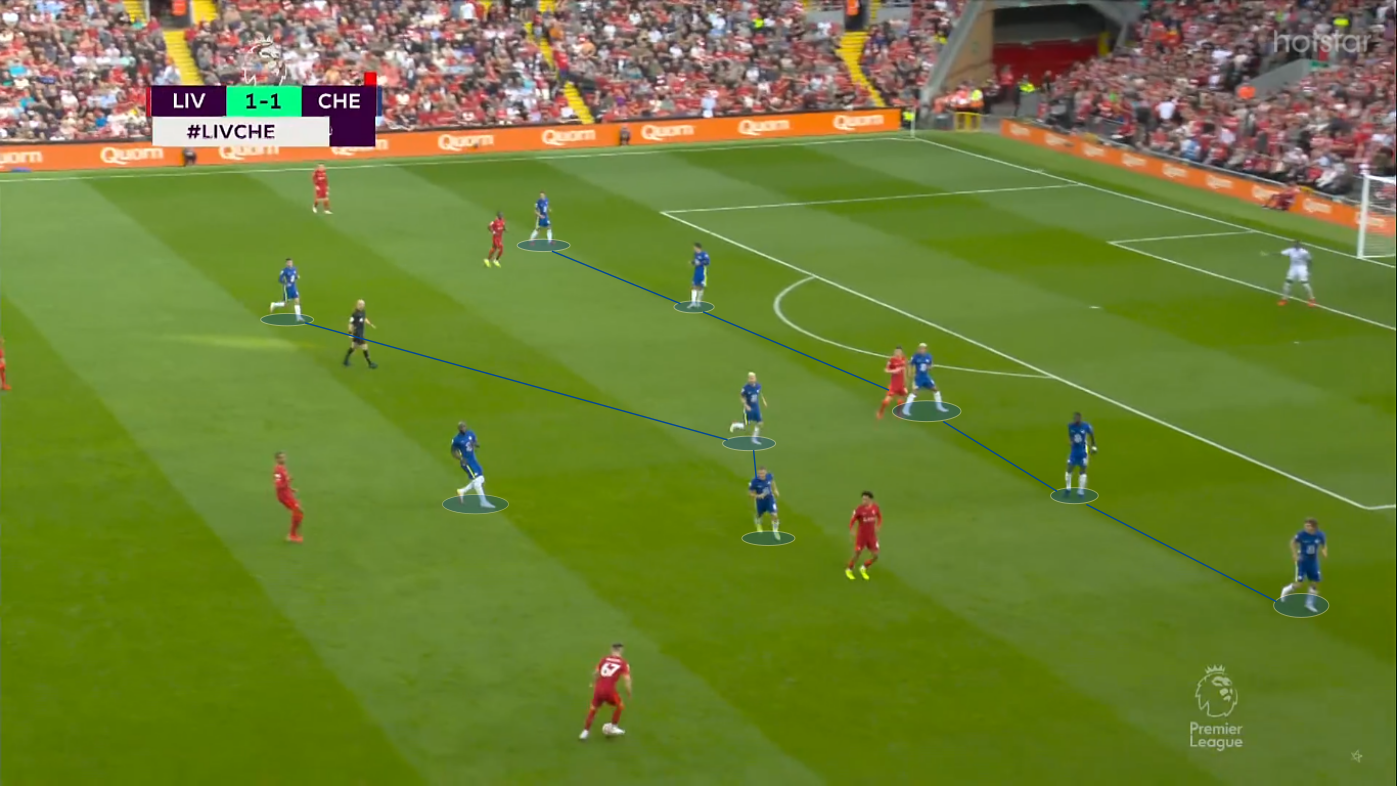 A week after their 2-0 London derby victory against Arsenal, Chelsea hit the road again – this time covering a much greater distance as their destination was Anfield, where they were set to face Liverpool.

Both sides had perfect records in the league heading into the match with no goals conceded and five scored, but something would have to give in this battle between two potential title rivals.

There were no real surprises in terms of formations or personnel apart from the fact that Roberto Firmino came in for Diogo Jota and Andy Robertson returned to full fitness to start ahead of Konstantinos Tsimikas for Liverpool and N’Golo Kanté completed his return from injury to replace Mateo Kovačić.

The first half was a really intriguing tactical battle as both sides looked to press each other really high and with great intensity, leading to some really exciting end-to-end football.

Kai Havertz opened the scoring with a looping header from a corner, but the dynamic of the match changed right at the stroke of half-time.

A corner at the other end led to an almighty goalmouth scrap with everything but a goal. However, those things included a handball on the line by Reece James in a bid to keep the ball out of his goal.

The referee did not see anything in real-time, but just one freeze-frame showed by VAR was enough to convince him that it was not only a penalty but also a red card for the Chelsea wing-back.

Mohamed Salah equalised from the spot, and Chelsea went into the half-time break with a serious problem.

Coming out for the second half, they made a couple of changes. The first saw Thiago Silva replace Kai Havertz, and the second brought Kovačić on for Kanté, who might have also had an injury issue.

With this, Chelsea transitioned into a 5-3-1 with Silva at the heart of the backline, Andreas Christensen to his right and César Azpilicueta on the extreme right, while Kovačić and Mason Mount dropped into midfield on the left and right respectively of Jorginho. Romelu Lukaku was alone up front.

Now, of course, they were camped firmly inside their own half, with the back-five just ahead of their ‘D’ to prevent any space from opening up space in behind for the Liverpool forwards to run into.

Any Premier League side can sit back with a numerical disadvantage and make themselves hard to break down, but for most, one mistake will eventually creep in and then it won’t rain, it will pour – just ask Arsenal.

Therefore, sitting back in your own half for 45 minutes without conceding any chances is a very tough job – one that even the incredibly well-drilled Chelsea were not ready to do.

When they did win the ball back, there was no point in trying to build up patiently and pass around the back because Liverpool’s press coupled with a numerical advantage meant that possession would be almost certainly turned over.

Instead, they looked to get forward as quickly as possible, and they committed some very decent numbers to their cause too.

Kovačić did not replace Kanté because he was better defensively – in truth, even a 70% fit Kanté might do a bit better than the Croatian international out of possession.

However, the ex-Real Madrid midfielder provided an invaluable outlet with the ball at his feet thanks to his ability to carry the ball and shield it from opponents, and that is why he came on for the second half.

Lukaku’s hold-up play also proved quite helpful in this regard, as it allowed his teammates to get forward.

Finally, both wing-backs were not scared of getting all the way forward down the wing, leading to several Chelsea bodies being present in Liverpool’s defensive third.

12 of Alonso’s 39 touches in the second half came in the opposition half, while that number dropped to 6 out of 37 for Azpilicueta, who certainly was the more conservative of the two.

Thanks to that and Kovačić’s presence on the left of midfield coupled with Trent Alexander-Arnold often drifting into a central position while Harvey Elliott held the width for Liverpool, Chelsea almost exclusively attacked down their left wing.

This was crucial from several aspects. First of all, it provided their defenders with an opportunity to rest and reset instead of having to face wave after wave of attacks if they just aimlessly punted the ball forward, which would eventually lead to a mistake from one of them.

Secondly, it gave Liverpool something to worry about in defence and prevent them from going all-out in attack, which would have again spelt trouble for the visitors’ short-staffed defence.

And, obviously, it also gave Chelsea some sort of a chance to score a second goal. They only managed two shots in the second half, one of which was blocked from close range by Joël Matip. The other, though, was a very presentable opportunity.

There were risks attached to attacking in this manner, though, and they were highlighted immediately after this. Liverpool immediately went long and found themselves in a 3v4 break as Chelsea’s defence was in disarray.

The move culminated in Mohamed Salah getting a decent chance right at the edge of the box, but since it was on his weak foot, he did not do too well with and the shot trickled into the goalkeeper’s arms.

To their credit, though, this was the only real break Chelsea conceded in the second half, which is quite impressive when you see the number of times they committed almost half their outfielders forward.

Liverpool’s second-half shot map pretty much sums everything up – most of their good efforts came from well outside the box.

The shots from inside the box were either blocked or headers that missed the target, apart from that Salah effort we looked at previously and a Jota header – both of which were straight at the keeper.

Of course, Chelsea deserve a lot of credit for coming up with this plan in a short time frame and executing it to a tee both collectively and individually, but at the end of the day, you always need a little bit of luck to go your way if you are to succeed with 10 men.

Even without the penalty, Liverpool racked up 2.7 xG in the match (a fair chunk of that was admittedly from the scrap that preceded the spot-kick, but even they could have scored another goal), translating to 1.05 xGOT.

Therefore, Eduoard Mendy should also be given his deserved share of praise for effectively keeping one goal out and consequently winning a point for his side.

Then, you have to hope that your opponents don’t get any good luck of their own. In this case, one of Liverpool’s seven shots from range could feasibly have taken a deflection and caught the goalkeeper wrong-footed on another day, and there’s nothing that Chelsea could have done about it.

But you know what they say about luck – you make it on your own. Chelsea certainly did all they could in that respect in this match, which is why they absolutely deserve the point they came away with.