The Barclays Premier League returns this weekend following the International Break. This weekend includes some mouth watering fixtures that will give fans good value for their money.

Liverpool vs Manchester City
Liverpool will host Man City in the mid-day kick off at Anfield. The Reds will look to bounce back to winning ways with victory against the blue side of Manchester. Rafael Benitez’s men, have won only one of their last 6 games, and will look to do so again without their Spanish striker, Fernando Torres, who again misses out with a groin injury.
However, skipper Steven Gerrard is likely to play, which is a fantastic boost for the Reds who also welcome back Glen Johnson and Daniel Agger.
Jamie Carragher is suspended, with the only other casualty for Liverpool being Fabio Aurelio who is nursing a calf injury.

Manchester City look to bounce back from 5 consecutive draws with a solid performance at Anfield. Manager Mark Hughes has named Robinho, Gareth Barry and Craig Bellamy in the squad for the trip to Merseyside but Martin Petrov is ruled out of the tie after injuring his knee during International duty with Bulgaria. The Citizens are trying to break into the top 4 this season and victory over Liverpool could give them an advantage in the early stage of the season. 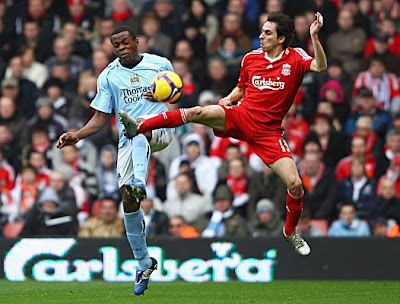 Manchester United vs Everton
The late kick off on Saturday sees Champions Manchester United take on Everton at Old Trafford.
The Red Devils will be eager to put 3 points on the table after defeat against Chelsea 2 weeks ago. Good news for United as ever present centre-back Nemanja Vidic is expected to return to the line-up. However, England defender Rio Ferdinand is still out with an injury related to a lower back problem. Manager, Sir Alex Ferguson, will also have to cope with the absence of club captain Gary Neville (suspended) with Jonathan Evans and John O’shea also doubtful. This could lead to Wes Brown filling in at centre back with youngster Rafael expected to take the right back slot.
Bulgarian International Dimitar Berbatov may not recover in time, so Michael Owen may well start up front with fellow Englishman, Wayne Rooney.

Everton have had a mixed campaign so far, with plenty of first team regulars missing through injury.
The Toffees recently ended a run of 7 games without a win in all competitions with a 2-1 defeat of West Ham United a fortnight ago, and they will look to continue against the Red Devils.
Summer signing Diniyar Bilyaletdinov, is suspended for the game following his red card against Aston Villa. Louis Saha and Jack Rodwell have taken knocks but are expected to play.

Sunderland vs Arsenal
The Stadium of Light will see Steve Bruce’s men take on an on-form Arsenal team.
Sunderland will look to continue their good form against the top four with a good performance against Arsenal after previously defeating Liverpool and drawing with Champions Manchester United.
However, they will be made to do it without striker Kenwyne Jones and defender Michael Turner, who are both suspended. England midfielder Lee Cattermole and Scotland goalkeeper Craig Gordon are both ruled out, but Lorik Cana returns and new signing Bolo Zenden is available.

Arsene Wenger has a problem to deal with, as the clubs top scorer [in the league] Robin Van Persie has been sidelined for up to 6 weeks after ankle ligament damage during Holland’s friendly against World Champions Italy.
Nicklas Bendtner is injured so Croatian forward Eduardo is expected to start having just signed a new long term deal at the North London Club.
The Gunner’s overall top goalscorer Cesc Fabregas will look to continue his fantastic form for both club and country as he aims to spearhead Arsenal’s attack against Sunderland.
This game will be sure to produce some entertaining moments as Sunderland currently sit in 8th and Arsenal 2nd with both teams performing superbly so far this season.

Cesc Fabregas (left picture) will aim to continue his good form and will Steve Bruce’s (right picture) men continue their good start to the season.