Earlier in the year, The Linesman predicted a tough year ahead for Tottenham despite their unbeatable 1st half. It didn’t turn out any better, but only worse. Now they are even dropping out of top four.

It would be unfair to labour all the blame on just one’s shoulder, but none of the Tottenham fans would disagree that Gareth Bale’s dipping form is a major contributing factor.

Yes he has suffered from injuries; and Harry Redknapp’s reluctance to rotate the squad does not help. However, even when Bale was playing, he was never the threat that had tormented Maicon and Sagna in the 2010/11 season. He was not slowed down by tired legs; instead, he was slowed down by his faulty mindset.

The magic that Harry casted in the Norwich game in December promoted Bale’s ability to play in a central free role. Certainly he possesses the skills – good ball control, pace to outrun centrebacks as well as a lethal left foot – to play behind the striker and he demonstrated by scoring both goals in a 2-0 victory.

Yet this is not what Spurs need Bale to do constantly. They have already got two fantastic creative midfielders working in the middle of the park. What Spurs value Bale the most – as well as defenders fearing the most of him – is his speed and threatening crosses which provides width to their attack and grants extra space in the middle for Modric and Van der Vaart to blossom.

What we saw in recent weeks, though, was the Welsh winger doing what he is only second best at. This has confused the Spurs defenders as well, as when they got the ball, three players in the centre will show up and ask for the ball, apparently slowing down the tempo. While Assou-Ekotto is already not the quickest full-back in the world, Bale’s change in playing style leaves Spurs’ attack, particularly on the left flank, imbalanced and is more or less self-destructive. 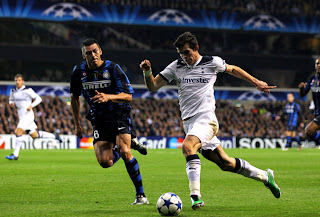 Gareth on the left and at his best

It is always preferable for a player to have a plan B just in case plan A doesn’t work (or works less well) under certain situations. Nonetheless Bale, or even his manager will need to realise how to utilise the winger’s abilities to the maximum to compromise with the team’s tactics in the remaining fixtures and help Spurs salvage a top 4 finish.

Who will Tottenham Miss The Most; Bale or Modric?
Chelsea Fans You Can Win The Ultimate Chelsea Experience