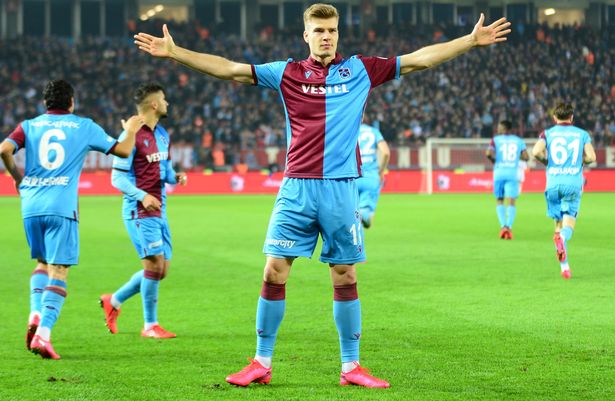 Red Devils boss Ole Gunnar Solskjaer is eyeing a surprise move for striker and fellow Nordmenn Alexander Sørloth. According to Turkish outlet Fanatik, United are eyeing the striker ahead of the summer transfer window.

The 24-year-old Norwegian is currently on loan in Turkey with Trabzonspor from Crystal Palace. Sorloth has impressed in his recent loan move, netting 27 goals and chipping in with nine assists in all competitions.

Sorloth started his career in his native Norway with Rosenborg in 2013, a loan move to FK Bodo/Glimt would follow where he hit 13 goals in 26 games. He joined Groningen in 2016 and played a season in the Dutch league before moving FC Midtjylland where he spent half a season before his big move to England.

However, the Red Devils aren’t the only ones eyeing Sorloth, Chelsea, Real Madrid, Napoli and Juventus have also been linked with a surprise move for the player.

Sorloth who moved to England in 2018 in a £9million pound move from FC Midtjylland has just scored the once for Palace – in the league cup win over Swansea from 20 matches.

It’s claimed United are keen to land a new striker this summer, with Solskjaer hoping to provide competition for places up top.

This seems a bit of a gamble for United if you consider his record in the Premier League but it could be one that pays of for United. Being 6ft4 he would be a target man and a target for corners and set pieces. He would offer something different to what United currently possess.

United fans, What do you think?