Vulnerable defence did not slow down Red Devils at Reading

Two consecutive heart-broken losses had sunk Reading a step closer to the bottom of the table. Brian McDermott would be over optimistic to hope to rebound with a win at home against league leader Manchester United. He chose to keep the team who fought hard in mid-week unchanged and hoped the extra support from the home crowd could bring them a surprise result in the late Saturday afternoon. 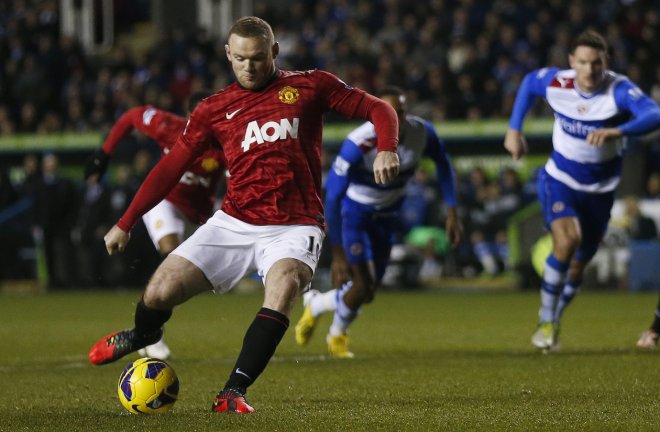 Rooney ended his goal drought with a brace

Despite the victory, Sir Alex Ferguson was not completely satisfied with the team performance on Wednesday against West Ham. The return of Rio Ferdinand and Darren Fletcher gave better assurance in defence, while Ashley Young, the only available winger in the squad, would be responsible for providing some width in attack.

The 4-3-3 formation enabled Manchester United to dominate possession early in the game, in particular Reading opted not to press too high up the field. Without a natural right winger, Rooney and Van Persie rotated to fill in the position, but this had left a hole in the defence, which Reading capitalised when Evans could not clear cleanly a cross by McAnuff on the left flank and Robson-Kanu stroke past Lindegaard to give Reading an unexpected early lead.

Manchester United had already got used to the storyline of the season and it seemed there was little reason to panic. Nerve had caught Reading first indeed. Shortly after Anderson got the better of Federici in the near post, Jay Tabb needlessly bodychecked Johnny Evans in the box following a corner. Rooney ended his goal drought by converting the penalty and the Red Devils had once again come back from behind.

Reading fans could not believe in what they witnessed, but 10 minutes later, the head-shaking turned into delightful chanting. Two excellent corners from Nicky Shorey, together with United hibernated defence, saw Le Fondre and Morrison power two headers past the helpless Lindegaard. Hairdryers in the dressing room were already warming up, but United struggled thoroughly in dealing with crosses from both flanks. The traditional tactics were taunting Manchester United.

The fascinating football Reading plays is truly entertaining, though the practicality is truly questionable. The depth in midfield was lacking and a few passes could penetrate the defence fairly easily. Evra and Ashley Young combined with a one-two on the left and when the cross of the French captain found Rooney, Reading’s centrebacks were looking in desperation for help from their midfield. They scored three against the league leader, still they could not protect the lead merely in the first half.

Brian McDermott may still be happy with a draw at half time, but Van Persie ensured this did not happen. Rooney’s flick released the Dutchman and Federici conceded the fourth goal of the match, only 34 minutes into the match. Nicky Shorey was the man to blame who failed to align with the defensive line and allowed Van Persie to beat the offside trap with ease.

Surely there would be little celebration in United’s dressing room during interval, even if Robin Van Persie’s effort on the rebound from Federici’s save had been ruled as a goal. The shot with enormous speed was clearly over the line, but would be hard to spot with only human eyes. United ended the first half with a crazy 4-3 lead, but their two Brazilians had already finished their duties of the night. Anderson was forced off due to injury, while the booked Rafael was pulled out with his lacklustre performance in defence. 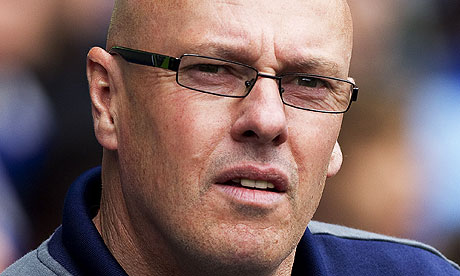 How aware McDermott is about the importance of defence?

Three points are more important than entertaining football to Sir Alex Ferguson. The substitution of Chris Smalling for Rafael was justfied. The more defensive-minded Phil Jones also helped to stabilise the midfield. However, one goal margin was never a comfortable cushion, especially against a team with unlimited willingness to attack.

Patrice Evra had a very busy evening. Often being a creator on the left flank, Robson-Kanu had also threatened in Evra’s zone with some daring runs. While Reading did not give up on equalising, United defence was much more composed than that in first half. McDermott tried to further haunt his opponents by introducing Pogrebnyak and Noel Hunt, but it was Morrison who had the final chance in the injury time.

Another comeback yet much more dramatic for Manchester United. It has not been very convincing recently, but United managed to become one of the three teams to survive the congested league fixtures with all three victories. Sir Alex will ride with the three point lead over Manchester City to begin the December.