Tottenham retained their good run of form against London rivals West Ham and made it 9 wins out of 12 for new gaffer ‘Arry.

The game was a close fought affair, with West Ham putting the ball in the net in just 22 minutes, profiting off a Jermaine Jenas own goal. However, Jenas was adjudged to have been pushed over by Lucas Neill, rendering the goal disallowed.

West Ham kept on pushing though, with James Collins and Craig Bellemy both going close.

However Spurs started to fight back, David Bentley had a good shot well saved by Robert Green, rumoured to be joining Tottenham in the transfer window. Roman Pavlyuchenko also went close, however his shot hit the post, Robert Green left sprawling.

After the break West Ham were once again the livelier team, however they lacked precision in the final third and couldn’t find a way to beat Heurelho Gomes, having an unusually good game for Tottenham.

It was in the 68th minute that Spurs broke the deadlock, skipper Ledley King netted for the first time in 3 years, putting the away side in the lead. The cross came from Aaron Lennon, in a rich vein of form, before being met from a powerful header, directed into the ground by the centre back. 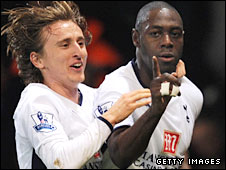 West Ham desperately flooded forward for an equaliser and it looked like they were going to find it in the 88th minute. Lucas Neill’s powerful drive was parried by Gomes who pushed the ball away. Young Hammers substitute Di Michele then pounced, unleashing a squirming shot at Gomes. However Gomes’ reactions stood him in good sted, and he performed a marvelous double save, keeping Spurs in the lead.

And, with just injury time left, Jamie O’Hara wrapped up the derby win with a fantastic 20 yard shot, a sure contender for December’s goal of the month.

Redknapp was predictably happy after the game telling journalists how impressed he was with his small squad.

“We were good value and deserved to win even after missing some great chances… Modric in the first minute and Pavlyuchenko hitting the post.

“We passed the ball well tonight at times and eventually we got the goal. I’m delighted with this victory.”

Gianfranco Zola was understandably upset, after seeing his side once again lose at home. Many now fear he is a leading contender in the sack race, racing alongside Blackburn’s Paul Ince.

“Unfortunately for us it was a disappointing game because it was one we all wanted to win,” he told journalists,  “I understand the fans’ frustration. We gave everything to make them happy.”