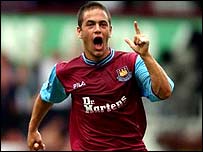 Cole, 29, scored ten in goals in 126 appearances for West Ham, his first club, between 1998 and 2003. Cole then moved to Chelsea where in the 2007-08 season, current Hammers boss Grant was manager.  When Grant was sacked after less than a season at the Chelsea helm, Cole sent him a “very touching message about how much he had enjoyed his time” under the Israeli.

Liverpool would be happy to see off Cole for the remainder of the season, making the move beneficial for all parties involved. The struggling England winger signed for Liverpool on a free in the summer when Roy Hodgson was in charge. Cole has failed to spark life into Liverpool though, scoring once in 11 appearances all season.

Meanwhile, Former Aston Villa boss Martin O’Neill has said he won’t be replacing Grant, apparently appalled at the West Ham board’s treatment of their current man at the top.

Sam Allardyce, formerly of Blackburn is now the main target for the Hammers, although ex–Newcastle gaffer Chris Houghton is also set to be contacted.

Is England playing in the Home Nations really a bad idea?
Bent But Not Broken: Sunderland Keep Hope