It was a match of no-match if purely looking at the league position of Wigan and Everton prior to the game. However, each team dominated half of the game and a draw seemed to be a fair result. Martinez would have thought they deserved all three points, but his failure to react to increasing pressure on the defence may have cost them two points.

Roberto Martinez played the usual 3-4-3 formation with a simple but effective counter attack plan. With the less mobile Jelavic as the lone striker, the right centre back was able to help the slightly less adventurous Boyce to contain Everton’s threatening left-hand side. The hard working Di Santo and Maloney filled in the void in Wigan’s midfield and were the main engines for attack. Di Santo, who returned from injury, was the main man in the final third. He fuelled Wigan’s attack with his energy and techniques. Not once he released Arouna Kone on the right with brilliant passes to spark a threat. Kone scored himself while also set one up for Di Santo. 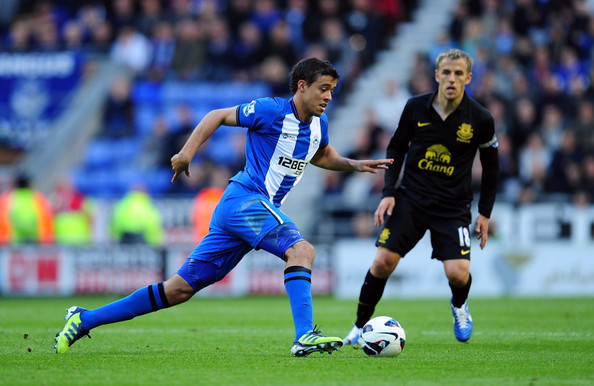 Everton could not resolve Wigan’s defence in the first half with their imbalanced squad. Coleman often found himself alone on the right when going forward. Jelavic’s goal, which came with a bit of luck, was the sole positive talking point for David Moyes at half time. The Scottish manager showed no rush after interval, but first resolved the defending issues. Substitute Distin’s better positioning and determination made Arouna Kone more or less an invisible man in the 2nd half. Leighton Baines thus was granted extra freedom to attack Wigan’s right flank.

Leon Osman shifted to the right, while Kevin Mirallas played just behind Jelavic to try disrupt Wigan’s defence. Fellaini dropped to midfield to help link up defence and attack. Frustration grew when more dubious decisions were given against Everton, but the exhausted Wigan became less capable to withstand Toffee’s pressure. Al Habsi had done all he could to keep the score at 2-1. Anichebe could have joined earlier in the match, but he made an instant impact by troubling Caldwell in the box. Moyes’ clever tactical moves, coupling with Everton’s admirable team spirit, earned them a hard-fought point at JJB stadium.

Man of the Match: Leighton Baines. The introduction of Distin in 2nd half allowed the English fullback to  pose constant threats on the left. His connection with Pienaar, Fellaini and MIrallas constantly exerted pressure and had finally exploited Wigan’s defence, despite a solid performance by Boyce. The calmly, though bravely, converted penalty concluded Baines’ sensational afternoon. 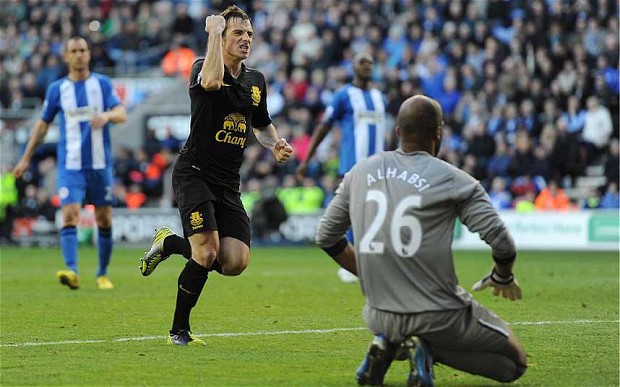 Flop of the Match: Maynor Figueroa. He was obviously the weakest link on Saturday afternoon. With little damage caused from Everton’s right flank, the left centreback found himself facing Jelavic often. Pienaar’s misfired shot luckily floated over Figueroa’s head to reach Jelavic to level the score at 1-1, but the defender mis-positioned again in the 2nd half to free Jelavic for an open shot, only to see his clumsy challenge surprisingly unspotted by officials. His final highlight of the day was another late tackle on Mirallas around the penalty spot, although it was Caldwell who brought down Anichebe that directly gifted the penalty to Toffees.

Official performance: Kevin Friend seemed to be more nervous than Roberto Martinez when Everton piled on the pressure in the 2nd half.  The yellow card was out of his pocket more than often, as if he was eager to keep the game under his control. He correctly identified some moments when Everton players were looking for a penalty, but had also missed a handball and Figueroa’s tackle on Jelavic in the box. Overall, it was a less than friendly and below-par match for Kevin Friend.