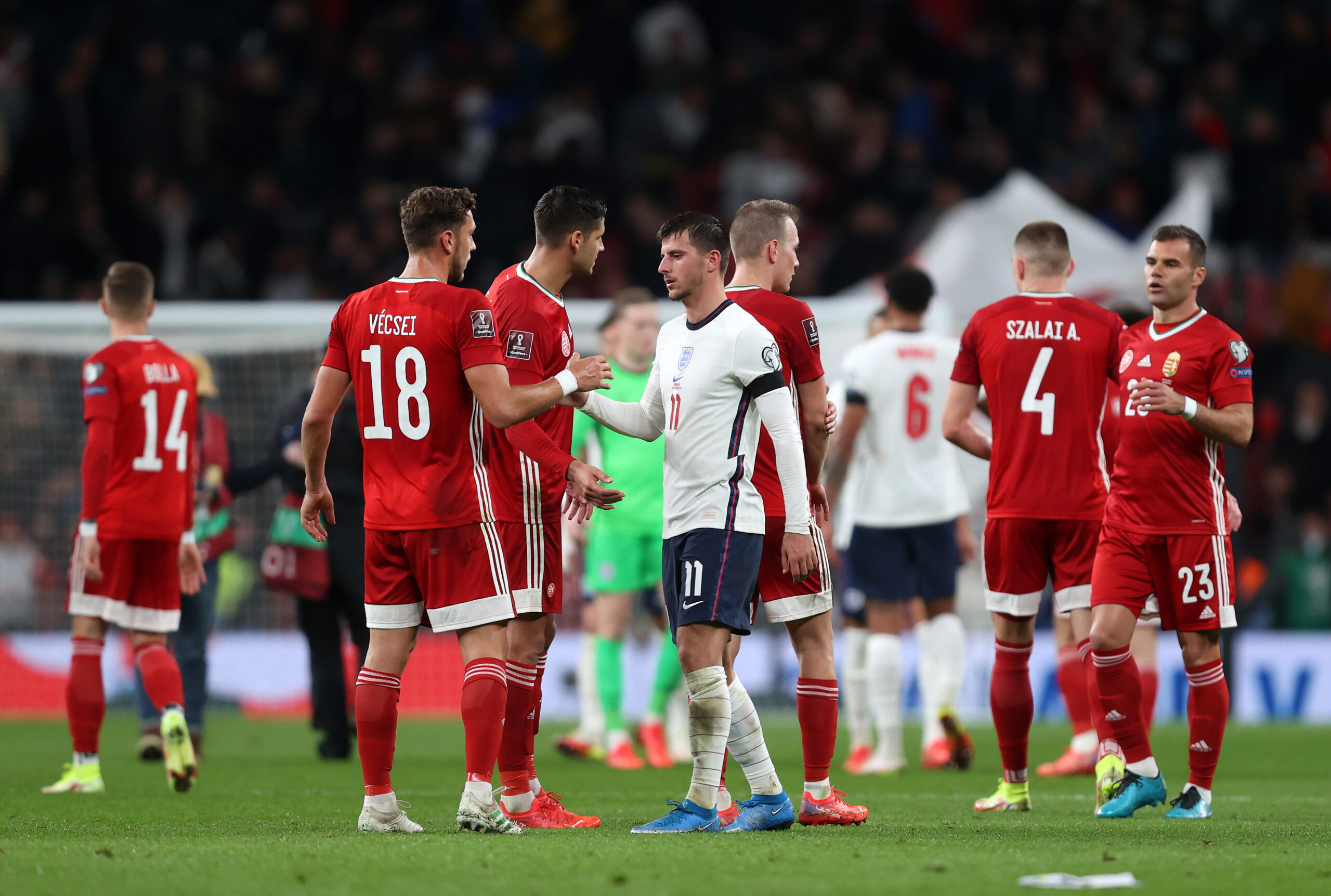 The October international break came to a close on Tuesday evening, with England and Hungary playing out a 1-1 draw at Wembley.

The visitors took a surprise lead when Luke Shaw was penalised for a high foot. Roland Sallai stepped up and converted his penalty.

But the Three Lions hit back before half-time when John Stones tapped in at the back post from Phil Foden’s free kick.

The hosts pushed for a winner in the second half but could not find their way past a stubborn Hungarian backline.

As with every England result that isn’t a 10-0 win, the fans on Twitter threw all rational thought out of the window and had a complete meltdown.

Because any half-decent team would obliterate Hungary, as evidenced by this summer’s European Championships.

Here are five talking points from the draw.

Over the last year or so, Gareth Southgate has become renowned for setting up defensively.

A staple of his side at Euro 2020 was the defensive midfield pairing of Declan Rice and Kalvin Phillips, who helped the Three Lions keep five clean sheets out of a possible seven.

The latter was absent through injury, with many expecting Jordan Henderson to come in and take his place. But, to our surprise, the manager chose a more attacking option.

In Tuesday’s line-up, England played with Rice as a lone defensive midfielder, with Phil Foden and Mason Mount alongside him in midfield.

The front three was formed of Raheem Sterling, Harry Kane and Jack Grealish. It was a starting XI that people had been crying out for.

Unfortunately, it didn’t work out as planned. However, this isn’t a reason to panic. Adjusting to a new system can take time.

If anything, this possibly gives us a glimpse into Southgate’s plans for the World Cup. With more than a year to prepare, now is probably the right time to implement a new style.

Hopefully, it will be fully operational by the time they reach Qatar.

It feels like we’ve spoken about Harry Kane every single day since the turn of the year. And guess what? We’re talking about him again.

The 28-year-old has made a slow start to life in the 2021/22 season. As of now, he is yet to score a goal in the Premier League, just months after winning his third Golden Boot.

But despite this, he was still producing the goods on the international stage. He was the top scorer of the Euro 2020 knockout stage and had netted in 15 qualifying games in a row.

That run came to an end against Hungary when the forward was noticeably poor. He hardly got a sniff at goal and wasted a glorious chance shortly before being substituted for Roma’s Tammy Abraham.

And the same question has popped up – is Kane just in a bad run of form, or is there something deeper going on?

A world class striker like Kane doesn’t just turn bad overnight, and this isn’t the first time he’s made a slow start to a season.

But if he doesn’t pick up his form soon, the questions will keep coming.

Mason Mount is known for being a player that Southgate likes. When he’s available, he starts almost every big game. However, his performances aren’t exactly justifying the manager’s trust.

During the summer, he was one of England’s weakest performers, registering just one assist throughout the tournament. And, in truth, it’s difficult to remember the last time he really performed in an England shirt.

Mount is clearly a good player – he was voted as Player of the Year for a team that won the Champions League. But until he steps it up for the national team, there will always be critics.

Southgate has come under a lot of fire for his game management during his time in charge. Whether it be not acting quickly enough (Croatia at the World Cup, Italy at Euro 2020), or in some cases not acting at all (Poland in September).

Against Hungary, the 51-year-old was once again called into question for his changes. Kane and Mount were not on it, while Raheem Sterling and Phil Foden were also not showing that much threat.

Meanwhile, Jack Grealish was looking like the most likely to make something happen.

So it came as a shock to those watching when Grealish was substituted in the 62nd minute, with Bukayo Saka coming on. The Arsenal man made little impression during his cameo.

Kane and Sterling were given a further 14 minutes before being hooked, while Mount and Foden remained on the pitch for the full 90.

To end on a positive, England still look good from set-pieces. Once again, the goal that they scored came from a dead ball, with John Stones finishing after Foden’s free kick found its way to the back post.

The Manchester City centre-back almost notched himself a second after the break, but his header from Mount’s corner went narrowly wide.

Even without the main threat in Harry Maguire, England showed plenty of threat from set pieces.

In difficult games, set pieces can be vital. They provide an opportunity to break down a tough opponent.

And, given that you’d expect England to get several per game, their strength from set-pieces gives them a chance of beating anyone.